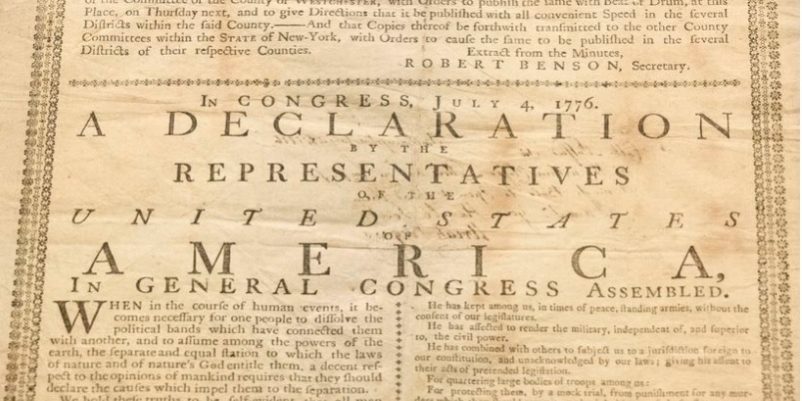 THE CONTINENTAL CONGRESS in Philadelphia approved the final text of the Declaration of Independence on the Fourth of July, but it wasn’t until July 8, 1776 that the historic document had been printed and could be publicly read. From the tower at Independence Hall the great bell rang out, summoning citizens to hear the new nation’s proclamation of sovereignty. What we know today as the Liberty Bell had not yet acquired its iconic crack. But its noteworthy inscription was plain to see: “Proclaim LIBERTY Throughout All the Land Unto All the Inhabitants Thereof.”

Those words hadn’t been drafted by one of the Founding Fathers. They came from the Hebrew Bible — specifically, Leviticus 25:10, where the ancient Israelites were commanded that at regular intervals, slaves must be freed and debts forgiven.

At the time of the Revolution, Jews were a minuscule fragment of the American population. Perhaps no more than 1,000 of the colonies’ 2.5 million residents were Jews, or “Hebrews,” as they were often called. But while the Hebrew presence in revolutionary America was microscopic, the Hebrew influence on revolutionary America’s ideas — ideas about freedom, monarchy, and national destiny — was immense. The inscription on the Liberty Bell is just one of innumerable examples of how language from the Hebrew Bible stamped the nation’s cultural and political vocabulary.

Many of those examples have been gathered in a new book, the title of which comes from the same biblical verse. Proclaim Liberty throughout the Land: The Hebrew Bible in the United States is a sourcebook spanning more than two centuries of American history, from the arrival of the Pilgrims through Abraham Lincoln’s Second Inaugural Address. Compiled by Meir Soloveichik, Matthew Holbreich, Jonathan Silver, and Stuart Halpern, four scholars affiliated with Yeshiva University and the Tikvah Fund, the book conveys how profoundly the Hebrew Bible shaped the way non-Hebrew America understood itself.

Woven into the warp and woof of life in the New World were the tales and teachings of the Old Testament. From William Bradford invoking the 107th Psalm in his account of the Mayflower’s landing, to Southern slaves voicing their ache for freedom in songs about Moses and Egypt, the American experience found its expression again and again in biblical terms.

Especially during the Revolution and its aftermath.

“The American Republic was born to the music of the Hebrew Bible,” write Soloveichik et al. It became a common theme during the American founding that “the Israelites’ story was the American story.” Continue Reading….