Now We Know What Happened: Poway’s Jews Defied Their Attacker, And He Fled 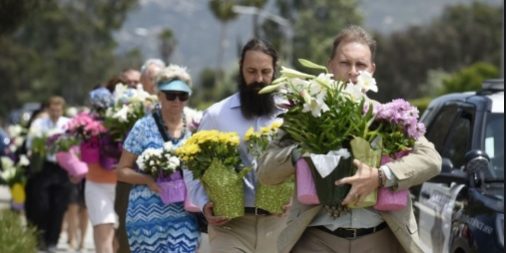 By Ari Feldman, The Forward—-

Saturday was the last day of Passover — one of the four times during the yearly cycle of holidays that Jews recite Yizkor, the prayer for the dead and for martyrs.

There were several dozen people in attendance for the service at the Chabad of Poway, the only Orthodox synagogue in northern suburbs of San Diego. Rabbi Yisroel Goldstein, a respected leader in the Chabad Hasidic movement, had helped build the synagogue in the mid-1980s with the help of a few committed members. That included Lori Gilbert Kaye, a frequent congregant for 30 years.

Now younger families had swung into this Chabad center’s orbit for Goldstein’s warmth and the synagogue’s educational programs. One Israeli family, the Dahan clan, had enrolled children in the religious school. Almog Peretz, whose sister Eden had married a Dahan, had become a frequent presence alongside his nieces during his frequent visits from Israel.

Then a 19-year-old gunman, compelled by a digital chorus of voices blaming Jews for the decline of the white race, walked into Chabad of Poway and forever upended the lives of the congregants there, six months to the day that another man had done the same, compelled by the same, in Pittsburgh.

Yet the story of Poway quickly became one of repeated acts of courage and defiance in the face of a man holding an AR-15-style weapon.

Ari Feldman
Ari Feldman is a staff writer at the Forward. He covers Jewish religious organizations, synagogue life, anti-Semitism and the Orthodox world. If you have any tips, you can email him at feldman@forward.com. Follow him on Twitter @aefeldman.