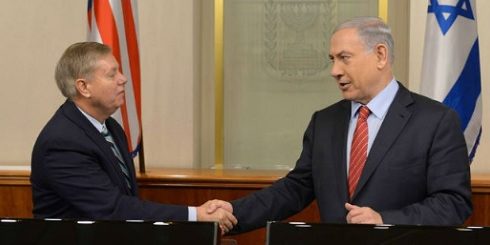 In a speech to the Republican Jewish Coalition (RJC) in Las Vegas on Saturday, South Carolina Republican Senator Lindsey Graham proposed a mutual defense agreement with Israel since “an attack against Israel should be considered an attack against the United States.”

Graham said America should tell Israel’s enemies that if they intend “to destroy the one and only Jewish state, you have to come through us to get them.”

Graham also spoke with optimism about the upcoming Senate vote on U.S. recognition of Israel sovereignty over the Golan Heights. Last month, the senator visited the Golan with Israeli Prime Minister Benjamin Netanyahu and promised that he would lobby for the U.S to recognize Israeli sovereignty. Just a few days later, President Trump announced his intention to do so.

Graham’s speech came after President Trump addressed the RJC, taking the opportunity to comment on the upcoming Israeli national elections in which incumbent Netanyahu faces a challenge from the new Blue and White party led by former IDF general Benny Gantz.
“It’s gonna be close,” the president said. “I think it’s gonna be close. Two good people. But I stood with your prime minister at the White House to recognize Israeli sovereignty over the Golan Heights.”