In West Bank, Ya’alon plugs ‘right to settle every part of the Land of Israel’ 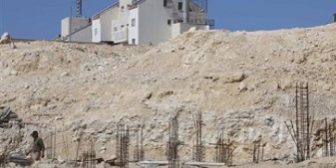 By Raoul Wootliff, Times of Israel—

Days after joining political forces with Israel Resilience chair Benny Gantz, former defense minister Moshe Ya’alon outlined on Sunday his ideological opposition to a two-state solution to the Israel-Palestinian conflict, praising the settlement project in the West Bank and saying that the Jewish state “has a right to every part of the Land of Israel.”

Following a parlor meeting held by the Telem party chairman in the West Bank settlement of Leshem, Ya’alon said in a video posted to social media that as both IDF commander of the Central Region and as defense minister he had been instrumental in the community’s establishment and was “delighted to see its expansion and growth.”

Looking out from the settlement located some 40 kilometers northwest of Jerusalem and 10 kilometers east of the security fence, Ya’alon said, “When you look westward and see the lights of the Tel Aviv region you can understand the strategic security importance of the settlement here in particular and of the settlements in Judea and Samaria in general, beyond exercising our right to settle every part of the Land of Israel.”

While Leshem is considered an independent settlement, it is officially demarcated as a neighborhood of the Alei Zahav settlement and falls within its municipal boundaries. Founded in 2013, it is now home to around 130 families and 900 residents. Continue Reading….