Art of Revelation: Soulful Journey of Yoram and Meira Raanan Through the Torah 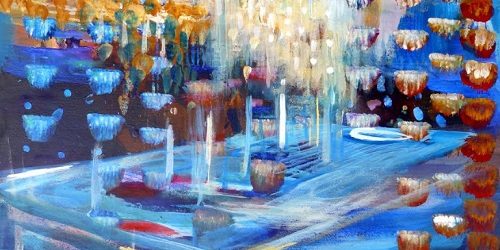 Israel is blessed to have the modern-time Bezalel in its midst. The name of the Bezalel-like figure is Yoram Raanan. He is a mighty artist who loves the land of Israel in all-consuming way as it bursts out from his canvases.

Yoram who is an American, whose both paternal and maternal grandparents were Litvaks, came to live in Israel 40 years ago. He married his wife Meira who was a Canadian Jewish student visiting Israel at the time – with a distinct feeling that she would not leave the place – within the first year of their both’ arriving to the country. “ I was lucky”, – Meira smiles. I am sure, they both are. Meira who is educated in Jewish art, thought and theology is working alongside her husband faithfully and productively. Temima, the one of their four adult children, all with their own young ones, is working with her parents at the Art Raanan that takes care on the Yoram’s art work.

Recently, Art Raanan has produced and published a wonderful book. Art of Revelation is a coffee-table colourful celebration of spirit. It is a material embodiment of both Yoram and Meira’s soulful journey through the Torah, with Yoram’s magnificent art work on every Parasha and Meira’s concise comments on her husband’s works and the Parashas.

Any project on the Torah is a multi-years journey. In this case, Yoram was producing his illustrations for Parashas weekly during three years, 2014-2016. For every Parasha, he followed his inner feeling, the essence of his own perception of the Parasha as he felt and thought about it at the moment. This is unusual for our days artist – he is immersed into the Torah studies. “Sometime I concentrate on Chumash, it could also be intense study of Halakha, though I tend to go with Chasidut and Mysticsm’ , – Yoram Ranaan told to me. He loves to walk around the places every inch of which is filled with the origin of the Jewish spiritual heritage. This artist lives at the place where King David is believed to compose his – and ours – Psalms. And you can see the imprints of these unique colours, that enlightened air, that intensity of our Jewish very being which is only authentic in Israel because it has its origin and dwelling in the only place on earth, Eretz Israel. Raanan’s King, rare figurative work for the artist who is working largely in the genre of abstract expressionism, is a memorable, deep and personal portrait of King David.

There is nothing realistic in those works that greets you from the Art of Revelation pages. There is an ocean of spontaneity there, delicate fantasy, fine vision – and a lot of love. Love to the Land, to our Forefathers, to our tradition, to our dream. These works are magnetic and absolutely sincere which is a very rare combination in the contemporary art. And yet, they are modern in style and bold in colouristic and execution. They are the work of the master.

There are 120 full-page illustrations in this book, and as the book discovers the colours of Torah for us in the perception of Yoram Raanan, we have not only a full spectre of it, that was to be expected. But we also are treated by quite large diversity of the artist’s vision. There are works from different periods included in the book, additionally to the core works made for that special project in 2014-2016: fantastic works from mid-1990s, so human and intense in feeling ( such as Day Six I) that the images there as if speaking to you from the canvas; there are also very dramatic, as from another century altogether works from early 2000s ( such as Pass Over); there are also many symphonies of colours singing the narrative of the Torah.

Meira and Yoram Raanans did select the works for their Torah journey to show to their readers and viewers all multitude of the subjects and themes in our spiritual Foundation. There is the Torah symbolism, the poetry that the artist was able to distinct and to express with regard to our Law, the warmth and continuity of our tradition, the ups and downs of the Jewish history, human dramas, challenges, choices – all of it in extremely intense artistic world created by Raanan on his journey through the Torah. My personal favourites in this generous richness of images and spiritual poetry are Yoram’s unforgettable image of Cherubim from his Chuppah Shir HaSihirim work ( 1993), his Shabbat Crowns ( 2014), the one of the best, in my opinion, work on the theme of Shabbat in the Jewish art in general, his magnetic Menorahs, and the very special work which stands out, even from this very high quality collection of art, Counting of the Weeks ( 2014-2015). My husband, the Jewish artist himself, said on this work simply: “ This is outstanding work. It says it all. It all is there. And it is endlessly beautiful”. The amalgam of beauty, the own life of colour, invention, freedom of artistic imagination, poetic perception of Jewishness has made the Yoram’s work so very special.

The book is unique. Not because of the features of the works, in this sense every illustration of the Torah is unique. This book is unique because it is the memorial to the great art works which are not longer exist.

Many people have heard on the tragedy that occurred to Yoram Raanan two years ago, in November 2016. His studio has been burned to the ground, with all 2 000 painting stored there, the result of 40 years of the work of the master, all the books, and the records of his career. It was the disaster of Biblical proportion. It is hard if possible, to imagine how is the artist who has put his soul of every single one of his work can survive such fundamental loss.

I remember vividly how deeply my husband, artist himself Michael and I were shocked upon hearing the news on devastating fire in Moshav Bet Meir. But yet more vividly I remember my second shock, yet deeper one, when we have heard in a few days after the disaster, on the artist’s reaction on that. He was calm and in full self-control. He said: “Well, it certainly means something important. Most likely, it means that I would have to start from a new beginning, and to look and think and do in a different direction”. We were stunned on the Yoram’s philosophical approach to the disaster, on his humility, and on his ability to be so positive and ready to work almost immediately after such devastation. My Finnish friend, well-known film director, has written to me on Yoram: “He certainly is a very strong person, and it is a very strong story, too”. Yoram’s wife Meira has mentioned to me that the artist has named his first painting after the disaster Angel’s Sparks. In the painting, one can see a lot of its black background, and some grey bits referring to ashes, with lesser amount of orange bits referring to fire. But the prevailing ones are light yellow bits with transparent hues of sun and hope. The Angel’s Sparks expressed in the light of hope prevailing the danger and sorrow of reality. The artist makes simple and very clear statement on the aspiration of his soul.

When Yoram was running with his wife Meira in the midst of the fateful night from their house, while their studio and garden had been in flames, in that mad rush he grabbed a flash memory stick into his pocket. On that stick, there were his Biblical works. The book that the Raanan family and their Art Raanan published now, two years after the fire, is the memorial to those great works of outstanding master.

Yoram is a very intuitive artist. Not only he likes to experiment with techniques for his paintings, he is as if driven so very often by something or someone, or both, from inside or from Above, or both – so that the images appearing on his canvases are appearing as if by themselves. Such was the case with his beautiful Esther and with many other works, as well. “And then, all those figures, they are appearing from nowhere, and are coming and coming” – he has told me recently. – “ So, it can only mean that there is somebody else who is there with you while you are working” – I responded. – “ There certainly is” – Yoram told me in emphatically confident way. That’s why I am calling and perceiving my friend, the big Jewish master of arts, as our days’ Bezalel.