The Chutzpah of Hamas 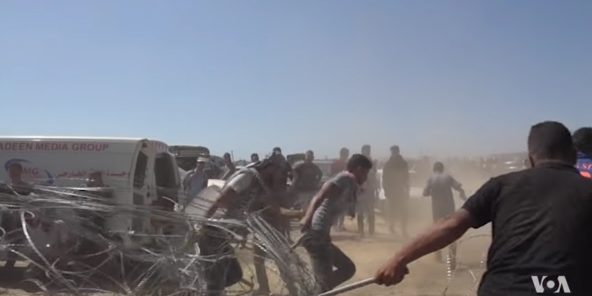 Like so many Yiddish words (and curses) the word “chutzpah” is very descriptive. The best definition is the old joke which appears in Leo Rosten’s classic lexicon, “The Joy of Yiddish.” He explains chutzpah as when you kill your parents, and then plead for mercy before the court because you are an orphan. That’s chutzpah!

In many respects, this accurately describes what Hamas is doing in Gaza.

Let’s be clear about what happened this past week, and the weeks leading up to it.

The terrorist authoritarian regime Hamas which controls Gaza with an iron fist, and whose stated goal is the destruction of Israel has organized massive demonstrations in what they are calling a “March of Return”. They have sent 40,000 – 50,000 people, many of whom are women and children alongside terrorists dressed in civilian clothes disguised as non-combatants to the front line of a hostile border, with the express purpose of massing tens of thousands of people on the border to attempt to cross over into Israeli territory. Their double-speak does not even hide or obscure that they are publicly stating that their purpose is to break the fence and cross into Israel, while at the same time also calling it a peaceful demonstration.

Has no journalist thought to ask a few simple questions, such as: Which is it — a peaceful demonstration or a violent confrontation? What is the goal of the “March of Return”? And what do you intend to do if you are successful and enter Israel? I have yet to hear a single journalist ask these three, simple, not too sophisticated, relatively obvious questions.

The Gazans are sending kites with swatiskas attached to Molotov cocktails to their Israeli neighbors to burn Israeli farms and fields and destroy Israeli crops. How is that “peaceful”, and what does it reveal about the nature of their intentions?

Bus drivers who do not drive people to the demonstrations are threatened with their lives if they do not do so, and are paid handsomely for bringing people there, as are the folks who show up, with an additional bonus if they get shot.

Hamas is doing all this despite having been warned that Israel would do what any nation facing a similar threat would do. They have issued warnings that attempts to mass on the border in order to breach the fence will be forcefully resisted. But this does not deter the Palestinians from setting fire to tires, causing damage to the environment and using the smoke to serve as cover for their actions, so that Israel’s soldiers cannot clearly see them. That more were not killed is a testament to the restraint of the IDF.

After doing all of this – Hamas then feigns surprise, dismay and disgust when Israel protects its borders and its citizens. When Gazans are shot and killed, they demand sympathy from the world. This is the epitome of chutzpah! The difference though is that in the joke, the assumption is that the judge will recognize the ruse and not fall for it. But sadly, in today’s world, the Europeans, as well many on the left and the naïve uninformed media fall for it and condemn Israel for excessive use of force. There are even Jews who are uncomfortable when Israel defends itself. Some use that favorite standby, “disproportionate” – as if to imply were things evened out a bit and there were more casualties on the Israeli side, then it would be acceptable for Israel to defend itself.

That the charter of Hamas is an anti-Semitic harangue calling for the violent destruction of Israel and the expulsion of Jews from the land is somehow a non-issue, or ignored and irrelevant. People have become immune to their abhorrent racist ideology, as if it is an acceptable and legitimate position.

The criticism of Israel is coming from countries who would do exactly the same thing to protect their people were they presented with such a confrontation. In fact, many of these paragons of virtue who criticize Israel turned back unarmed refugees into raging waters to prevent them from entering their country. Now that’s chutzpah!

A Hamas online post included maps to Israeli communities showing the quickest routes from the border with Israel to Israelis’ homes, schools, and day-care centers near the border with the following instruction: “Bring a knife, a dagger or a gun.…keep it under your clothes…kidnap Israeli civilians and transfer them immediately to Hamas.” On May 13, Mahmoud Al-Zahar, a co-founder of Hamas, admitted in an interview with Al Jazeera: “When we talk about ‘peaceful resistance,’ we are deceiving the public.” On April 6, Yahya Sinwar, the Hamas political leader in Gaza, could not have been clearer about his intent. “We will take down the border and we will tear their hearts from their bodies.” Does that sound like a peaceful protest to you? Hamas itself boasts that 50 of the 60 who were killed the other day were fighters and terrorists affiliated with them or Islamic Jihad. And they come before the world, demanding an investigation and asking for mercy because their people are shot and killed. That is the classic definition of chutzpah!

If anything, Israel should be praised for how few casualties there have been.

I still play touch football with a group of high school friends every Thanksgiving. At some point during the game, one or both sides will use a standard “go-to” play. The quarterback will say in the huddle, “Ok. Everyone go to the left. I will go the right and sneak into the end zone.” Works every time. We’ve been playing for 50 years, and the other team still falls for it.

Well, the Palestinians must have gotten hold of our game plan and play book. They send large groups of demonstrators to approach one end of the fence, burning tires, shouting and causing a major distraction, while a small group of armed Palestinians goes to another area with wire cutters, knives, explosives and weapons to cut the fence so they could infiltrate and attack Israeli civilians. In one instance earlier this week eight armed terrorists tried to sneak in and when caught hurled pipe bombs and grenades at soldiers stationed along the border.

Were they trying to cross the border to make peace with their Israeli neighbors? Israeli towns are near the fence, a fence by the way which is inside Israel’s border. Were they coming to sit and have a cup of coffee with the residents of Nahal Oz and other kibbutzim? Were they coming to discuss how to improve the agricultural output of their fields?! Would any other nation be expected to tolerate such actions?

Calling these demonstrations nonviolent is an insult to Mahatma Gandhi, Martin Luther King, and all those who peacefully demonstrated to protest and overturn unjust laws. Civil rights demonstrators and those who marched, as did my father, did not come to their demonstrations armed with guns, hand grenades, machetes and pipe bombs. It is a cynical misappropriation and distortion of the means they used to change a society.

It is, quite simply, chutzpah.

In recent years, Hamas has tried various methods to terrorize their neighbors across the border. In addition to trying to penetrate through the tunnels and cutting the border fence to carry out attacks inside Israel they have sent over 10,000 rockets since taking control of Gaza in 2007, orchestrated suicide bombings. They have sponsored car rammings, kidnappings and drive-by shootings. It is not their goals that have changed. Only the tactics are new.

This is not a protest of economic conditions, or with lofty goals. Its purpose is not to change or reform their society or to campaign to lift a blockade. What we are witnessing is a conscious and cynical effort to shift the focus away from their misery and the governing power, Hamas. Hamas leaders do not wish to be blamed for the blatant daily violations of the human rights of its people or of the intolerable conditions it subjects its people to, especially not while the leaders amass personal fortunes. Just as the burning tires offer cover and subterfuge for terrorist acts of intrusions, the demonstrations themselves are meant to camouflage and distract Gazans and the world from placing the responsibility for the people’s suffering on the governing authority.

This is the same organization that takes money sent by other countries for humanitarian purposes and diverts it to build tunnels to infiltrate Israel. In 2014 Israel discovered that Hamas had built 32 tunnels under the Gaza border to kidnap or kill Israelis at a cost of $90 million. The Wall Street Journal reported that the average tunnel requires 350 truckloads of construction supplies, which would be “enough to build 86 homes, seven mosques, six schools or 19 medical clinics.”

Israel has facilitated the transfer of more than 7.5 million tons of material and assistance to Gaza, and that’s just since the last major military conflict with Hamas in 2014. Much of it comes in through a checkpoint called Kerem Shalom. Yet Palestinians recently set fire to the Kerem Shalom crossing which serves as the place where trucks were allowed to enter and bring in food. When they then come crying to the world that its people are being deprived of food and medical supplies, they are like the orphan who asks for sympathy. It is the latest manifestation of their chutzpah. And sophisticated rational educated people shouldn’t fall for it.

That is why the US policy is so refreshing. Not feeding the false hope that Israel can be eliminated may force the Palestinians to come to terms with their neighbor. The gatherings at the fence were called for long ago and have been going on for weeks. Despite the impression left by the juxtaposition of the split screen, this would have happened regardless of where the US Embassy stood.

It is understandable that we may feel somewhat conflicted over the loss of life. After all, Jewish teachings throughout the ages, such as the hagadah and elsewhere teach us to be distraught over the death of our enemies. Reluctant fighters such as reservist and kibbutz member Kinley (Moshe) Tur-Paz who was on the front line, explains in the Times of Israel there is no alternative. “We do not rejoice when we must go to war, but we also don’t go like sheep to the slaughter. Not anymore.”

The conflagration is being fought on two fronts: the battlefield and in the forum of public opinion. The IDF is doing its part to protect the citizens of Israel. We need to do our part as well. Let us resist the temptation to demonize Israel and to romanticize the Palestinians and make them into something they are not. Let us do what we can to be sure that Israel does not lose in the court of public opinion by understanding and explaining what the confrontation is really about, and let us defend Israel by sharing that message.