Jordan as Palestine: A paradigm shift for a two-state solution 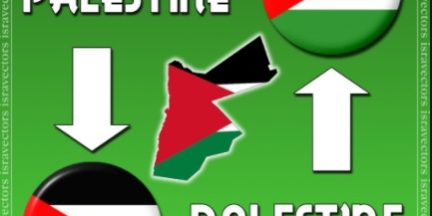 The Oslo Accords, however, removed the “Jordanian option” from the range of possible alternatives. Instead, Yasser Arafat, the PLO and the Palestinian Authority were installed as the rulers of what was intended to be another Palestinian state west of the Jordan River. The so-called “peace plan” failed not only because of Palestinian terrorism, but because of opposition to Israel’s existence. Moreover, the P.A., which includes Hamas and other Arab terrorist organizations, and the PLO never intended it to work. Their goal is to destroy Israel.

Although Arafat signed the Oslo Accords on behalf of the PLO and the PLO was obligated to remove the clauses in the Palestinian National Covenant that call for the destruction of Israel, it never did. Although an ad hoc form of the PLO’s Palestinian National Council met in April 1996 and approved amending the Covenant in principle, it did not change the Covenant; it merely gave a PNC committee the authority to do so or to draw up a completely new charter. Nor did they specify which articles would be changed or how that would be done. By leaving the Covenant intact, the PLO sends a clear message that it has not renounced violence nor accepted Israel’s right to exist.

Moreover, since the P.A. did not sign the accords, it is not bound by them; it is accountable, if at all, only to the PLO, which Mahmoud Abbas also heads.

Rather than understand why the Oslo Accords and what became known as “the two-state-solution” failed and reconsider alternatives, its architects, planners and supporters cling to their fantasies. Coaxing and bribing Palestinians to make a deal always fail because that would mean ending the conflict and accepting Israel—a betrayal of what Palestinianism is all about.

Establishing a second Palestinian state—or third if one includes Hamastan in the Gaza Strip—would lead to destabilization and increase the chances for violence between competing entities, gangs and militias that could spill over into Israel. Cross-border attacks are inevitable. Jordan might seek to expel its “Palestinian” citizens to the new state. And a power struggle would ensue over who represents the Palestinians and what constitutes the territorial basis for “Palestinian national identity.” With Islamist forces waiting to take advantage of any power vacuum, the area would plunge into a Somalia-like chaos.

Rather than abandon the idea of achieving Palestinian self-determination by establishing another failed state, the problem can be resolved by changing one word: “the” to “a.” Recognizing that Jordan fulfills the definition of a Palestinian state would defuse the toxic demand for another Palestinian state in Judea and Samaria (the “West Bank of Jordan”).

A “two-state solution” approach accepts the idea of “two states for two peoples” based on the reality of an already existing sovereign state on territory designated as “Palestinian,” where three-fourths of its inhabitants are “Palestinian.” According to the Palestinian Central Bureau of Statistics, there were nearly 4 million Arabs of Palestinian descent living in Jordan in 2009, about half of whom were registered as refugees in 2014 and about 20 percent of whom live in UNRWA-sponsored “camps.” Most, but not all, Palestinian residents have Jordanian citizenship; Jordan is the only Arab country that granted citizenship to Palestinians.

Arabs living in Israel and P.A.-controlled areas who consider themselves “Palestinian” and seek national self-determination can affiliate with a Palestinian-Jordanian state and move there if they wish. Those who prefer to stay in Israel can be allowed to do so with full civil, but not national rights—as is now the case.

Promoting Jordan as the Arab Palestinian state is consistent with international law and the British Mandate that created Jordan in 1922 as part of a “two-state-solution.” It would resolve the problem of national self-determination for Arabs living in Judea and Samaria and for those in Israel as well.

Unlike previous “Jordan is Palestine” plans, this plan does not intend or require that anyone move or border changes. Jordan recognized the Jordan and Yarmouk rivers, the Dead Sea and Arava as the international boundary in its peace treaty with Israel. The P.A. can continue to function as a political entity on condition that all incitement and terrorist activity cease.

Recognizing Jordan as a Palestinian state while maintaining its status as a monarchy, reflects the national identity of a majority of its population. Highly popular Queen Rania is considered a Palestinian (via her parents). Palestinians are a growing segment of Jordan’s political life and its parliament. Jordan is viable with a relatively stable economic and political structure. It has vast areas of unused land, but lacks people and water.

In order for Jordan to absorb large numbers of people and flourish, it needs water, which would allow it to extend its population centers eastwards. Utilizing abundant water sources in Turkey and or the Caspian Sea—the largest body of fresh water in the world—could turn eastern Jordan into an oasis, providing agricultural products, enabling business and industrial centers, and creating regional stability and economic development.

The possibility that Jordan could become an economic-trade center was recently given gravity when Israel’s Minister of Transportation proposed a rail link between Haifa and Jordan, which would connect European markets with Jordan, and from there to the Gulf States and Saudi Arabia. The recently rebuilt rail line between Haifa and Beit Shean is the beginning of this plan.

Non-Israeli Arabs who wish to remain under Israeli sovereignty as permanent residents could apply for Israeli citizenship; or they could choose to remain as citizens in P.A.-administrated areas; or they could continue as Jordanian citizens living in Israel. The choice should be theirs.

Arabs living in UNRWA-administered towns in Lebanon and Syria should be given the opportunity to become citizens in their host countries; they should be absorbed into the countries where they exist or allowed to emigrate. International-aid programs should be operated only by countries, not UNRWA.

Let there be no misunderstanding. I oppose Palestinianism and a Palestinian state whose only purpose—according to the PLO and Hamas Charters and its leaders—is the eradication of Israel. Preaching hatred and fomenting terrorism in their schools and media, it glorifies jihadism and promotes “martyrdom.” Why support that?

I do not suggest or intend in any way the overthrow of the current Jordanian government. Jordan is a strategic partner, and hopefully, will continue to be. The Jordanians, however, have a responsibility towards Arab Palestinians, and Israel should not be expected to bear the burden of providing them with a national homeland.

A two-state solution—Israel and Jordan—is in the national interests of both countries. It will bring peace and prosperity, and ensure the security and stability of the region. A Jordanian-Israeli confederation will replace failure and despair with opportunity and hope; it will inspire creativity, cooperation and freedom—the raison d’être of nation-states.