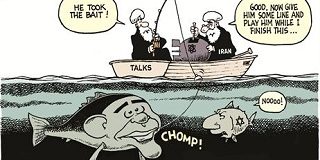 President Trump must decide by May 12th whether to cancel the Iran nuclear deal or to renegotiate critical changes that Obama left out. Iran wants neither option. In response, Iran is threatening the United States with serious “consequences”.

Iranian Minister of Foreign Affairs Mohammad Javad Zarif today issued a serious warning to the United States that if Trump “violates” the deal then there will be consequences.

“Iran stands firm in the face of futile attempts at bullying. But if the US continues to violate the agreement, or if it withdraws altogether, we will exercise our right to respond, in a manner of our choosing,” he warned, before vowing that “bluster or threats won’t get the US a new deal, particularly as it is not honoring the deal it has already made.

“Thus the US is well-advised to finally start honoring its commitments, or it and only it will have to accept responsibility for the consequences of not doing so,” he threatened.

This Iranian response is laughable considering Israeli Prime Minister Netanyahu just revealed the massive lies of the Iranian administration upon which Obama overlooked to sign the deal. It is not the United States that has not lived up to the commitment of the deal, but the Iranians. Yet the Iranians are experts at turning things around and blaming the United States for not “honoring” the deal.

Zarif also noted that “We have not attacked anyone in centuries”.

Anyone familiar with the chaos of the Middle East today knows this statement is a joke. Iran is behind much of the violence across the region.

– Iraq today is a vassal state of Iran, ruled by many Iranian forces and trained forces.

– Syria today is also a vassal state, with many Iranian forces helping Assad control his country.

– Hizbullah is Iran’s proxy military in Lebanon used for decades to attack Israel.

Iran is the biggest state sponsor of terrorism in the world, designated as such by the United States State Department.

The day has come for the world to tell Iran “enough”. Obama couldn’t do it. European leaders can’t do it. Hopefully President Trump can do it.

President Trump does not like threats. Let’s see how he responds to this Iranian threat.