The Treasure Trove from Tehran 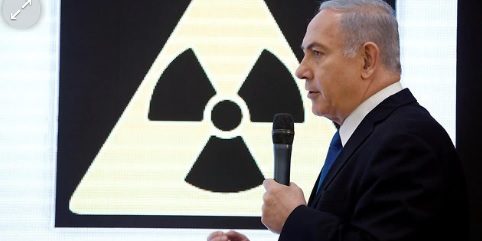 Yesterday, Prime Minister Netanyahu astonished the international community by displaying the 110,000 documents that the Mossad was able to gather from a dilapidated warehouse in Tehran proving that the Iranian regime has been lying all along about the use of its uranium enrichment program.

What is not so shocking is that the Iranian leadership lied. What is astonishing is how the Mossad was able to smuggle these documents out of the country and into Israel. The Mossad has always been considered to be the premier intelligence service in the world, but this feat even broke their amazing record.

“These files conclusively prove that Iran is brazenly lying when it says it never had a nuclear weapons program”, Netanyahu said at an international press conference at the Defense Ministry, replete with slides. “The files prove that. The Prime Minister said Israel had shared their intelligence coup with the United States.

Secretary of State Mike Pompeo said the United States “can vouch for its authenticity”, and would share it with other nations, as well as with the International Atomic Energy Administration, (IAEA), the UN’s nuclear watchdog.

In a memo put out shortly after the Prime Minister’s Press Coference, the Secretary of State said, “For many years, the Iranian regime has insisted to the world that its nuclear program was peaceful. The documents obtained by Israel from inside of Iran show beyond any doubt that the Iranian regime was not telling the truth. I have personally reviewed many of the Iranian files. Our nonproliferation and intelligence officials have been analyzing tens of thousands of pages and translating them from Farsi. This analytical work will continue for many months. We assess that the documents we have reviewed are authentic.

The documents show that Iran had a secret nuclear weapons program for years. Iran sought to develop nuclear weapons and missile delivery systems. Iran hid a vast atomic archive from the world and from the IAEA — until today.

Among the flaws of the Iran nuclear deal was the whitewashing of Iran’s illicit activities related to its military nuclear program. Iran had many opportunities over the years to turn over its files to international inspectors from the IAEA and admit its nuclear weapons work. Instead, they lied to the IAEA repeatedly. They also lied about their program to the six nations who negotiated the Iran nuclear deal. What this means is the deal was not constructed on a foundation of good faith or transparency. It was built on Iran’s lies. Iran’s nuclear deception is inconsistent with Iran’s pledge in the nuclear deal “that under no circumstances will Iran ever seek, develop, or acquire any nuclear weapons.”

We could not possibly agree more. How can one sustain an agreement that is built upon lies? We believe that the past is prologue, and that the P5 plus 1 (The United States under Obama, Russia Red China, France, Britain plus Germany), who negotiated the deal were willfully blinding themselves to Iran’s record of deception.

Now that it is out in the open, it is difficult to understand how, in particular France, Germany and Britain can perpetuate a deal based upon such false premises. Frederica Mogherini, the European Union’s High Representative of Foreign Affairs and Security Policy responded to this by saying, “What I have seen from the first reports is that Prime Minister Netanyahu has not put into question Iran’s compliance with the JCPOA commitments, meaning post 2015 nuclear commitments.”

However, section Q of the JCPOA specifically limits the IAEA inspectors from going into Iran’s military sites. May we ask: If you had something to hide from international inspectors, wouldn’t you place in precisely the place where they are not allowed in?