You Cannot Whitewash Away Polish Anti-Semitism 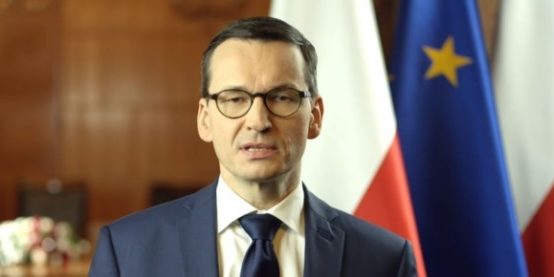 Polish Prime Minister Mateusz Morawiecki was forced last week to deny being a Holocaust revisionist, after suggesting that Jews were complicit in their own genocide.

Referring to a new Polish law making it illegal to say the country has responsibility for the Holocaust, an Israeli journalist, and son of Polish survivors asked Morawiecki if he could face prison for recounting how his mother was betrayed by her Polish neighbors.

Morawiecki’s remarks were a shameful adulteration of history. There were no “Jewish perpetrators” of the Holocaust. They were victims. The Jewish prisoners who participated in the extermination machinery did so under the immediate threat of death.

The new law, which Polish lawmakers chose to push — on the eve of holocaust remembrance day, no less — cannot be understood without an appreciation of the context from which it emerged, nurtured by the rise of nationalism in Poland and the tactic support of the populist government, which views itself as the guardian of Polish historical honor.

A dark trend is once again sweeping across the European continent. In Macerata, a small town in Italy, a neo-fascist admirer of Mussolini recently went on a shooting rampage, wounding five men and one woman of African origin. In Austria, a party with neo-Nazi roots now sits in the coalition government. And from Hungary to the Czech Republic, France, and Britain, political parties and their supporters are reviving the old blood libel against Jews. Europe’s grip on its bloody past is far from assured.

Of course, Poland’s history with the Third Reich is complex. If the new law were to clarify that the Polish government had no official role in the Holocaust, it would be an accurate reflection of events. Likewise, Poland is right to object to the flippant use of “Polish death camps” to describe Auschwitz-Birkenau, Treblinka, Belzec, Sobibor, Majdanek and Chelmno rather than “Nazi death camps inside Poland.”

But in every country under Nazi occupation — Poland is no exception — most of the local population were either silent witnesses to the slaughter or willing participants in the annihilation of Jews.

Take, for example, the role of Polish collaborators. In July of 1941, 1,600 Jews, nearly the entire Jewish population in the village of Jedwabne, were murdered by their Polish neighbors. Some were hunted down and killed with clubs, knives, and axes. Most were forced into a barn and burned alive.

The Polish police collaborated with the Germans on many occasions such as in Warsaw, where they remained on duty to control the 50,000 Jews still alive in the ghetto after the liquidation in the summer of 1942.

This is only part of the story. In Poland, complicity and heroism coexist. An important aspect of history that must not be forgotten or minimized is the sacrifice of the Polish Underground State. The organization, which came to the rescue of Polish Jewry, operated from 1939 to 1945 and was subordinated to the Polish government-in-exile.

The Council to Aid Jews codenamed “Zegota,” a unique organization one on a global scale, provided structural and monetary assistance to Jews hiding among the Polish population and those living in ghettos, saving the lives of tens of thousands. Thousands of other Poles sheltered Jews despite the fact they and their entire families faced execution by the Nazis if they had been caught.

But the selfless act of humanity by a selective group of Poles cannot whitewash the more sinister chapters of Polish history. In Poland and many other parts of Eastern Europe, historical revisionism is far from a new phenomenon.

The widespread hostility that Jews faced did not die with the defeat of the Nazis. After the closure of World War II, Jewish survivors that returned home were confronted with an anti-Semitism that was terrible in its fury and brutality.

The new communist government in Poland made no mention of the crimes committed against Jews by the Nazis. They, too, were Antisemites. In July 1946, a pogrom occurred in the Polish town of Kielce, resulting in 42 Jews being massacred, an event that Poland’s foreign minister would recognize fifty years later as an “act of Polish anti-Semitism.”

In recent years, things have regressed again. A rise in nationalism has always been bad for the Jews.

Matters were not helped when Poland, over the last decade, have lost important public intellectuals who reminded their country of the horrors of the Holocaust with first-hand accounts. Among them Marek Edelman, a Jewish leader of the Warsaw Ghetto uprising, and Wladyslaw Bartoszewski, a leading figure in the Zegota underground organization.

The so-called “Holocaust Bill”, the new Polish law, promotes the avoidance of historical responsibility and deflects blame, in an attempt to rewrite history in the name of blind nationalism. But the Holocaust cannot be denied, avoided or played down. We are here to remember, educate and speak truth to power.