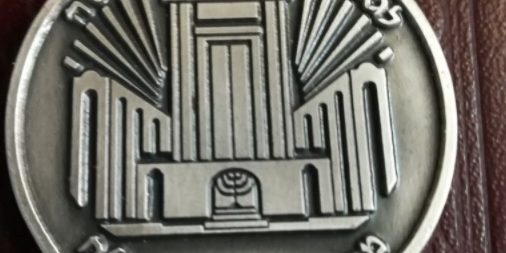 A newly minted coin featuring President Trump, King Cyrus, and the Third Temple has been featured in media around the world, graphically illustrating that support for the Jewish Temple on the Temple Mount is now a global phenomenon that is transcending political and religious boundaries.

Three weeks ago, the nascent Sanhedrin and the Mikdash (Temple) Educational Center, a non-profit organization for education about the Temple, partnered in a risky venture to mint a commemorative medallion with an image of President Donald Trump and the Persian King Cyrus. The flip side features a stylized image of the Third Temple.

Both signed a contract to mint 1,000 coins in the hope that the message on the coin that calls out to the US president to support the Jewish claim to the Temple Mount, would resonate with enough people to cover the total expense of the coins. They offered the coins to the public for a minimum donation of $50, and the response has exceeded all their expectations.

Breaking Israel News first broke the story about the coin, which quickly became a sensation in the Israeli press and then followed by stories in The New York Times, Newsweek, Reuters, Associated Press and other major international media. The organizers are also being interviewed by the Swedish, British, and Chinese press.

“It is clear that interest in the Temple is much stronger and much more universal than previously thought,” Mordechai Persoff who established the Mikdash Educational Center, told Breaking Israel News. “This goes beyond political boundaries.”