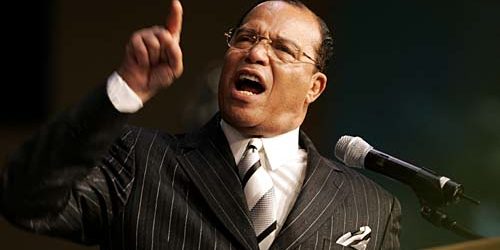 In recent times, there has been one constant in anti-Semitism in America: Louis Farrakhan. His lacerating speeches over more than three decades and more from his pulpit and perch at the Nation of Islam have repeatedly placed Jews at the center of conspiracy theories blaming them for everything from controlling the banks and media to engineering the slave trade.

The longtime leader of the Nation of Islam, Farrakhan’s name has become virtually synonymous with anti-Semitism. He’s the pied-piper of hate. His obsessive harping on about the “evil, satanic” Jews and their supposed efforts to keep down African-American people, ironically, puts him in a similar category to white supremacists and others who traffic in some of the worst anti-Semitic stereotypes.

And yet Farrakhan is not entirely a fringe figure. He is a leader of a religious movement who draws thousands of attendees to his speeches and fills auditoriums for his sermonizing. His popularity gives him the dubious distinction of being, quite possibly, the most popular anti-Semite in America today.

This all becomes timely because Farrakhan last weekend once again took center stage at the annual NOI Saviours’ Day convention in Chicago, where, in front of thousands of his most devoted followers gathered in the 10,000-seat Wintrust Arena, he launched into yet another withering and slanderous attack on Jews.

After insisting that he’s not an anti-Semite but a “truth teller,” Farrakhan suggested, among other things, that Jews are part of “the Synagogue of Satan;” that the white people running Mexico are Mexican-Jews; that Jews control various countries including Ukraine, France, Poland and Germany where they take advantage of the money, the culture and the business; that Jesus called Jews “the children of the devil”; and “when you want something in this world, the Jew holds the door.” He also claimed that Jews control the government and the FBI and use marijuana to feminize black men.

And the problem is larger than his speeches. The Nation of Islam organization has virtually institutionalized his brand of bigotry by publishing blatantly anti-Semitic tracts and promoting a larger anti-Jewish propaganda campaign. The NOI uses its programs, institutions, publications, and social media to disseminate its message of hate. At last weekend’s convention they were heavily promoting, “The Secret History Between Blacks and Jews,” a multivolume tract that blames Jews for orchestrating the transatlantic slave trade. It deserves a place on the shelf of every bigot alongside “The Protocols of the Elders of Zion,” another work of libelous fiction used to foment little more than intolerance.

Beyond his anti-Semitism, Farrakhan also targets the LGBT community– “do you think Allah is pleased with you bringing the evils of Sodom and Gomorrah to the entire world?” and white people in general — “the greatest thing that is happening is the natural death of the White race.”

Farrakhan’s brand of hatred is retrograde during a time when Jews have found broad acceptance in society and anti-Semitic conspiracy theories no longer hold sway among the vast majority of Americans, according to ADL’s polling. After all, we are no longer in the days of Father Charles Coughlin, whose anti-Semitic speeches in the 1930s and 1940s filled large auditoriums and found an audience among the masses in his nationwide radio broadcasts.

But here’s the problem: Farrakhan does have an audience and still has widespread popularity among his devoted followers. Because of Farrakhan’s reach and influence and his broad name recognition and something like celebrity status, some public officials, politicians, and hip-hop entertainers are still willing to meet with him, still willing to have their pictures taken with him. They seemingly have a blind spot when it comes to his anti-Semitism.

For instance, U.S. Rep. Danny Davis, D-Illinois, recently praised Farrakhan as “an outstanding human being.” When ADL called him out for this remark, Davis insisted he had been misquoted and asked us to share recent examples of Farrakhan’s anti-Semitic rhetoric. He assured us he rejects anti-Semitism in all forms, but Congressman Davis still hasn’t publicly repudiated the NOI leader.

Or consider that in the audience at last weekend’s conference was Tamika Mallory, one of the leaders of the Women’s March, who got a special shout-out from Farrakhan and who regularly posts laudatory pictures of him on her Instagram account — as does Carmen Perez, another leader of the March. Linda Sarsour, another March organizer, spoke and participated at a Nation of Islam event in 2015. Her most notable response to his incendiary remarks this year was a glowing post on Perez’s Facebook page to praise Farrakhan’s youthful demeanor.

When asked about her association with Farrakhan, Perez refused to denounce his anti-Semitism and instead retorted: “There are no perfect leaders.” It is impossible to imagine any other group being asked to tolerate seeing celebrities, public figures, and elected officials embrace a person who openly calls for their death.

At a time when anti-Semitism indisputably is on the rise and our society seems more divided, the inability of public figures to denounce the words and leadership of Farrakhan is a problem — not only for Jews, many of whom are and want to continue to be active partners in the fight against hate in this country — but also for all those who believe in equal justice and dignity for all.