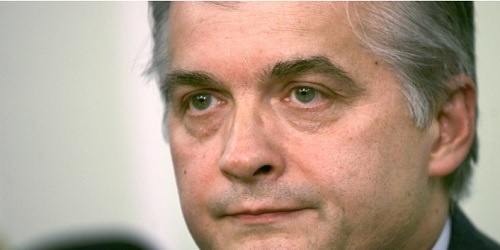 A former prime minister entered Poland’s fraught debate over a new law that prohibits discussion of Polish collusion with the Nazi Holocaust, bluntly telling a leading newspaper that “of course” there were cases of Poles collaborating in the extermination of the Jews. “Of course Poles took part,” former Polish premier Włodzimierz Cimoszewicz told the newspaper Rzeczpospolita on Wednesday. Emphasizing that “today’s generation is not responsible for what happened,” Cimoszewicz — a social democrat politician who was Poland’s prime minister during the mid-1990s and also served as the country’s foreign minister — urged Poles to talk “openly and honestly” about the experience of Nazi occupation. Among the historical examples he cited were the “tens of thousands” of “szmalcowniks” — Poles who informed on Jews or extorted their property. At least 60,000 Jews had been denounced by Poles to the Nazi Gestapo, Cimoszewicz said.

Ninety percent of Poland’s pre-war Jewish population of 3 million was murdered following the Nazi German invasion of September 1939. The former prime minister also noted that more than 6,000 Poles had been honored as “Righteous Among the Nations” by Israel’s Holocaust memorial, Yad Vashem. “We are all obliged to remember these heroic people, but we must not allow their heroism to cover the crimes and wickedness of a much larger group of Poles,” he continued. “Antisemitism was and remains endemic in our country,” Cimoszewicz said. Cimoszewicz accused Poland’s nationalist government of deliberately exaggerating the damage to Poland’s reputation through the use of phrases like “Polish death camp” to describe Auschwitz, the slave labor and execution factory constructed and operated by the Nazi German occupiers near the town of Oświęcim in the south. “Now (Polish PM Jarosław) Kaczyński has caused that phrase to reach thousands of recipients,” Cimoszewicz argued. The decision of Poland’s president, Andrzej Duda, to sign the IPN Act, as the Holocaust legislation is known, into law earlier this week proved to “everyone in the world, not only Israel” that the new law “is not a random manifestation of parliamentary madness,” he said.

Cimoszewicz — who in 1997 became the first Polish prime minister to visit Israel — said that Poland’s relations with the Jewish state had been “seriously damaged.” “I am afraid that, to some extent, it is irreversible,” he added. The former premier also predicted that the new law would adversely affect relations with the US, specifically citing the potential impact on Congress of the American Jewish Committee’s (AJC) strong opposition to the IPN Act. Describing AJC, which maintains an office in Warsaw, as having been “a very constructive partner of Poland for decades,” Cimoszewicz said that the damage done to relationships such as these would be “felt into the future.” The response to Cimoszewicz’s interview on the Polish right was predictably harsh. One popular columnist and broadcaster, Rafal Ziemkiewicz, denounced the former prime minister and his family as “congenital traitors.”