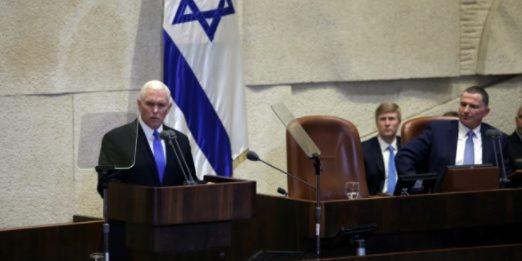 “We stand with Israel, because we believe in right over wrong, in good over evil, and in liberty over tyranny,” Pence said in his address. “The people of the US have always held a special affection and admiration for the People of the Book.”

“The Book” Pence was undoubtedly referring to was the Bible, which he said not only described the story of the Jewish people but also foreshadowed the story of America in a similar fashion.

“In the story of the Jews, we’ve always seen the story of America,” he said. “It is the story of Exodus, a journey from persecution to freedom, a story that shows the power of faith and the promise of hope.”

Rabbi Yehudah Glick, a Likud Member of Knesset who is an advocate for religious equality on the Temple Mount, felt that Pence’s reference to the Exodus was especially poignant, and he compared the vice president’s connection with Israel to Biblical Jethro’s connection to the Children of Israel.

“When we read about the Exodus, we learn about two kinds of people: Jethro, a non-Jew who saw the significance and came to join Israel, and Amalek who came to fight against Torah,” Rabbi Glick told Breaking Israel News.

As a representative of a “cherished friend” of Israel, Pence invoked a verse in Psalms, wishing Israel peace and security.

“The USA is proud to stand with Israel and her people, as allies and cherished friends. And so we will pray for the peace of Jerusalem, that those who love you be secure, that there be peace within your walls and security in your citadels.”