Happy New Year Jerusalem – A four-storey digital billboard in Jerusalem at the Friends of Zion Heritage Center says it all. “Thank you President Trump you’re making Israel Greater”. No president in history has ever built such an alliance for the State of Israel and the Jewish people, and no president has courageously stood up for the State of Israel on the global stage as President Trump.

For over 700 million evangelical bible believers globally, Trump is an answer to a prayer. 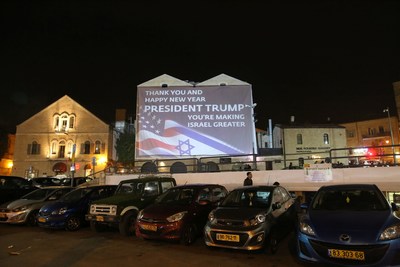 When Vice President Pence comes, he will have a ‘royal welcome’ with over 110 billboards, buses, and even camels.

Evans has been mobilizing his 31 million followers to influence world leader to stand with Israel and Jewish people and recognize Jerusalem as Israel’s capital. The objective is to have as many other states join Guatemala’s Evangelical President Morales and follow President Trump’s declaration and move their Embassies to Jerusalem.

The Friends of Zion Museum is involved in these historic declarations in many respects including a massive international campaign, which supports President Trump and President Morales for this historic recognition of Jerusalem.

Every world leader that says “yes” will receive the Friend of Zion Award said Mike Evans who gave the Friends of Zion award to President Donald Trump in the oval office this month.

President Trump’s historic declaration regarding Jerusalem takes its place as one of Israel’s historic millstones from the Balfour Declaration to President Truman’s acceptance of Israel into the family of nations. These heroes presented in the Friends of Zion Museum in Jerusalem tell the stories of characters throughout history that have stood by the Jewish people and helped establish the State of Israel. These non-Jewish Zionists are engraved in history and millions of people worldwide have learned of their heroism thanks to the groundbreaking work of Dr. Evans and the Friends of Zion Museum.

The Friends of Zion Heritage Center has become one of the central institutions in the State of Israel influencing the world and strengthening Israel’s relations globally while fortifying the pillars of the State of Israel. In addition to more than 31 million members globally the museum has hosted over 100 diplomats such as US Amb. David Freedman, President Rivlin, tens of thousands of Christian and Jewish leaders, NBA and NFL superstars, leading Hollywood actors and singers and is has become a must see site in Jerusalem.