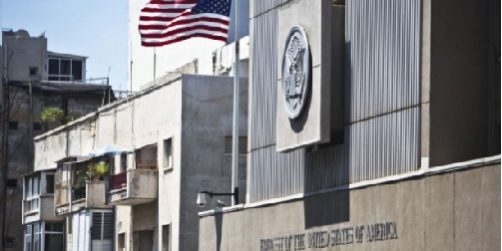 The security waiver used by every president since Bill Clinton to avoid implementation of a 1995 law requiring the US embassy in Israel be relocated to the capital city of Jerusalem lapsed Monday night amid speculation President Donald Trump could officially recognize the city as Israel’s capital or even announce an embassy moveas early as this week.

Under the 1995 Jerusalem Embassy Act, the US embassy in Israel must be moved to Israel’s capital city, Jerusalem.

The act does provide for a security waiver, however, allowing the president to delay implementation of the law for six months at a time if security conditions do not, in the president’s view, permit the move. Every president from Clinton to Trump has used the waiver to push off the embassy move.

While then-candidate Trump vowed in 2016 to move the embassy, on June 1st, 2017, Trump signed a six-month waiver allowing the embassy to remain in Tel Aviv until December 1st.

Last Friday, which marked six months since the last waiver, the White House reported that the president would delay acting on the waiver until after the weekend, promising a decision by Monday night.

But the Monday night deadline passed with no new waiver allowing the US embassy to remain in Tel Aviv, AFPreported Tuesday, increasing speculation that the president may in fact be preparing to relocate the embassy in the near future.

According to Eugene Kontrovich, Head of International Law at the Kohelet Policy Forum and a professor at Northwestern University, the president’s decision to allow the deadline to pass likely indicates that the embassy will indeed be moved.

“Midnight has passed and no Jerusalem Embassy waiver was signed,” said Kontrovich, “which means the law will take full effect. It is a hard deadline, and once a waiver is missed, it can’t be made late.”

“I can’t see any legal way out of this, the President has begun the process of moving the American Embassy from Tel Aviv to Jerusalem. Trump has finally corrected 70 years of discriminatory policy towards Israel, make no mistake; this is huge!”