Leftism, not the neo-Nazis, is what we should worry about 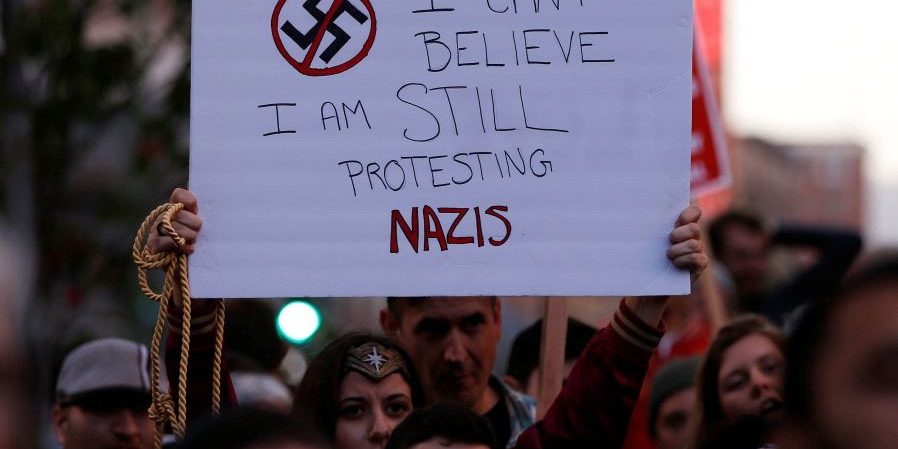 A fine and honorable Rabbi I heard on the East Coast recently is very worried about Nazis in America. He and many other Jewish clergy and lay people, particularly in the Reform and Conservative movement see them as a clear and present danger in America and associate them with President Trump and Republicans in general. Putting aside calumny and falsehoods directed at our President and Republicans, I am as much worried about Nazi’s in America as I am the Army of the Dead from Game of Thrones.

I am, however, very worried about the statist/leftist/progressive, whatever label you wish, invading and terribly harming America. Nasty accusations hurled at a duly elected President accomplishing a lot of middle of the road American things under incredible attack, reminded me of the Civil War we are in, the intense cultural war in which we find ourselves between American and Leftist values. The war is threatening the pillars holding up American civilization.

There are three pillars of Judaism- God, Torah, and Israel. So too are there three pillars of Americanism- In God We Trust, Liberty, and E Pluribus Unum. The Left attacks all three of these precious American foundations. They are the main targets of their battle to undo America and Western culture. Our clerical elite, the normative Democratic party, its violent Antifa wing, going on to our college professors, public school teachers and mainstream media continue yanking down not only statues of our vital historical memory, but the core values undergirding our American civilization. It’s been going on for a hundred years, starting with Karl Marx, on to John Dewy, Crowley, and the fathers of American progressivism – Woodrow Wilson, TR and FDR. It now is widespread and powerful, affecting the minds of millions of our citizens.

On the West Coast, Jewish clergy fasted because of the election of a Republican leader , the leader of a party whose normative member cherishes all three American pillars. For some reason these clergy never thought to fast when a radical Leftist President did one of the most despicable things in American and Jewish history, handing $150 billion dollars to hundreds of thousands of true Nazis in Iran . On the East Coast , from the tony Democrat enclave of Bethesda to the chiq leftist bubble of the Upper West Side, Jewish clergy mimic the Palestinian Authority, while America-trashing professors are widespread on our campuses and call what is good bad and bad good.

The men and women who have embraced Leftism spread its untruths unabashedly far and wide. They stand on pulpits and say or imply that us conservatives are connected to Nazis, are racists, sexist, bigoted, greedy, Islamophobic, anti-immigrant, homophobic deplorables. But the opposite is true. It is the conservatives who now man the barricades for American values. It is the conservatives who are now the liberals , the people who fight for middle of the road progressive biblical, Enlightenment, Western values of Americanism.

It is the Left that is bringing illiberalism to our shores. The world is truly turned on its head. As it says in Isaiah: “Woe to those who call evil good and good evil.”

And each pillar of America is under relentless attack by the left:

Pillar 1: In God We Trust: The American Left is taking us along the path trod by now soulless and Godless Europe where the most important thing that occupies people’s minds in general is how much vacation time they get, how many freebies they may expect from the work of their neighbors, and how they may vilify Christianity, America and Israel.

Many of my Jewish brethren still amazingly salivate over sending their kids to our Harvards, Stanfords, and Yales, but tragically, because of Leftism, these places of learning have become generally worthless, anti-American, anti- Israel, Godless , foolish , wisdom- free institutions. Saying, “God created the universe and he ultimately judges you”- fundamental tenets of Judaism and Americanism, would be considered almost lunacy on these campuses today.

Most students would demand trigger warnings and safe spaces if a Professor were to read from the Bible. It is now illegal for an American teacher in a public school to open the most important Book in the founding of America or to say the beautiful words: “Good morning students, may God bless you, your parents, your teachers, this school, and this great country.” She is now , however, thanks to the Left, free to abuse our kids by reading them about sexual fluidity and the idiocy claiming that sex assignment is defined by the mind.

Pillar 2, Liberty: Liberty is under severe attack from the Left. If God is now but a trigger warning, then without him there is no true liberty because there are no unalienable rights. If you’ve got a phone and a pen, some community organizing skills, a radical leftist pedigree, and a chair in the White House or Supreme Court, well then, who is to say what ones’ rights are but the occupier of such chairs? Hence, we get those on the Left unfazed by a now post-Constitutional America where law and order vanish and politician’s or judges whims, ideology and greediness for power become the order of the day.

We get 40 or 50 % of our Jewish and non -Jewish kids and a majority of Democrats in Congress desiring to overturn the 1st amendment regarding free speech. It’s why we now have a Leviathan sized government armed with trillions of dollars and hundreds of thousands of pages of laws lording over every aspect of our lives. Our founders would barely recognize this country, once a sea of liberty but now reduced to mere puddles.

The foolishness and destructiveness of this is breathtaking. Every society on earth that has not solidified around one culture and one value system has experienced chronic discord, imploded or destroyed itself. Embracing multiculturalism is an embrace of division .Take a peek at uber-multicultural Europe committing civilizational suicide by abandoning national identity and welcoming millions of people uninterested in and actively fighting assimilation.

That is what we now have, the three pillars of Americanism under powerful assault by citizens embracing a foreign illiberal value system called Leftism. Their playbook comes out of all Leftist playbooks- vilify and demean your ideological adversaries. Stalin called Trotsky a fascist. Trump is a Nazi. That’s why we liberals (now called conservatives) are so vilified each day.

Many good, kind, and well meaning Jews have jumped on board. That shows the power of propaganda and poor education. It shows how intelligence and well meaning natures are ultimately unrelated to goodness or wisdom.

Donald Trump has nothing to do with Nazis and American Nazis have nothing to do to what is threatening America. Leftism is the evil in our midst.