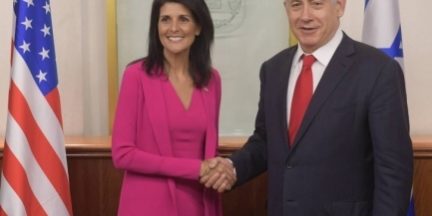 Unesco, the United Nations cultural organization, declared the ancient and hotly contested core of Hebron in the Israeli-occupied West Bank as a Palestinian World Heritage site in danger on Friday, despite a concerted diplomatic effort by Israel and the United States to scuttle the decision.

The Palestinian Authority administers most of Hebron, a predominantly Palestinian city, under the Oslo peace accords of the 1990s. But an enclave around the historic core remains under full Israeli military control and is also home to several hundred hard-core Jewish settlers.

The area designated as a heritage site includes the Cave of the Patriarchs, an ancient shrine revered by Jews, Muslims and Christians as the burial place of the biblical patriarchs and matriarchs. Muslims refer to the imposing stone structure as the Ibrahimi Mosque, using the Arabic name for Abraham, who, according to the Bible, purchased the cave as a burial plot for his wife, Sarah. He is considered a prophet in Islam.

The Unesco decision, made on Friday by secret ballot, was welcomed by Palestinians, who have lobbied for the move for years. But it was widely criticized by Israel and its allies, who accused Unesco of failing its mandate to foster cultural cooperation.

Prime Minister Benjamin Netanyahu of Israel, in a statement, described the Unesco decision as “delusional.”

“This time they determined that the Cave of the Patriarchs in Hebron is a Palestinian site, i.e. not Jewish, and that the site is in danger. Not a ‘Jewish’ site?!” he added, listing the biblical figures said to be buried there.

Mr. Netanyahu’s office said Israel would further reduce the membership fees it pays to the United Nations by $1 million a year and would use the funds to establish a Jewish People’s heritage museum in Hebron.

Adding to the historical sensitivities and outrage, the World Heritage Committee is convening in Krakow, Poland, leading some Israelis to connect the Unesco vote to a desecration of the memory of Jewish victims of the Holocaust.

Emad Hamdan of the Palestinian Hebron Rehabilitation Committee told the assembly after Friday’s vote, “We think we are shouldering the responsibility and you proved you are there to shoulder the responsibility.” He said the site needed protecting from “violations” of the “occupation.”

The Palestinian Ministry of Foreign Affairs said in a statement that Hebron’s designation as a World Heritage site “transcends geography, religion, politics and ideology.”

By having ancient Hebron inscribed on the endangered list, the Palestinian request for recognition was fast tracked, and the World Heritage Committee will be obliged to discuss the case annually.

In the run-up to the vote, the United States ambassador to the United Nations, Nikki Haley, sent a letter to two senior United Nations officials asking them to withhold the Hebron designation. She argued that other treasured sites, from the Democratic Republic of Congo to Syria, were under more imminent danger of destruction.

Hanan Ashrawi, who leads the Palestine Liberation Organization’s department of culture and information, described this and other actions taken by Ms. Haley at the United Nations as a “one-woman crusade” and an “obsessive and targeted campaign” against the Palestinians.

On Friday, Ms. Haley issued a statement calling the vote “an affront to history,” and added: “It undermines the trust that is needed for the Israeli-Palestinian peace process to be successful. And it further discredits an already highly questionable U.N. agency.”

The Hebron decision came after a string of recent resolutions that ignored or minimized the Jewish connection to holy sites in the Old City of Jerusalem also located in contested territory.

The Jerusalem Center for Public Affairs, a conservative-leaning Israeli research group, said the Unesco designation ran contrary to the Palestinian commitments in the Oslo peace accords of the 1990s for the joint governance of Hebron and shared worship in the Cave of the Patriarchs.

Emek Shaveh, an Israeli group of left-leaning archaeologists and activists, said that “rather than squabbling and scoring points,” both sides should have agreed on inscribing Hebron as a World Heritage site, but added that the Palestinians could also have expanded on Hebron’s importance in Judaism.

Hebron has witnessed much Jewish-Arab strife and bloodshed.

Arabs massacred 69 Jews there in 1929. Months after the 1967 war, when Israel won the West Bank from Jordan, Jewish settlers came back to the city. Palestinian gunmen killed six settlers on their way home from prayers in 1980, and three years later, members of the Jewish Underground gunned down students at the Islamic College in Hebron, killing three. And in 1994, Baruch Goldstein, an American-born Israeli physician, fatally shot 29 Muslims who were praying in the Ibrahimi Mosque.

For most of the year, the holy site’s prayer area is divided into separate halls for Jewish and Muslim worshipers, with separate entrances and each side administered by its own religious authority.

In another contentious move, Unesco also approved China’s request for special recognition for a vast, traditionally Tibetan region known as Hoh Xil or Kekexili, part of the high-altitude plateau in Qinghai Province roamed by nomads. The International Campaign for Tibet, an advocacy group critical of China, challenged the move, arguing that it would bolster China’s efforts to resettle tens of thousands of Tibetan nomads into villages.

“Unesco is supposed to uphold and safeguard the world’s culture,” Pema Yoko, the executive director of another advocacy group, Students for a Free Tibet, said in a statement. “But this shameful decision will do exactly the opposite and will ultimately assist China in denying Tibetans their fundamental rights.”