Why are these seders different from all other seders? Because Jesus serves as paschal lamb 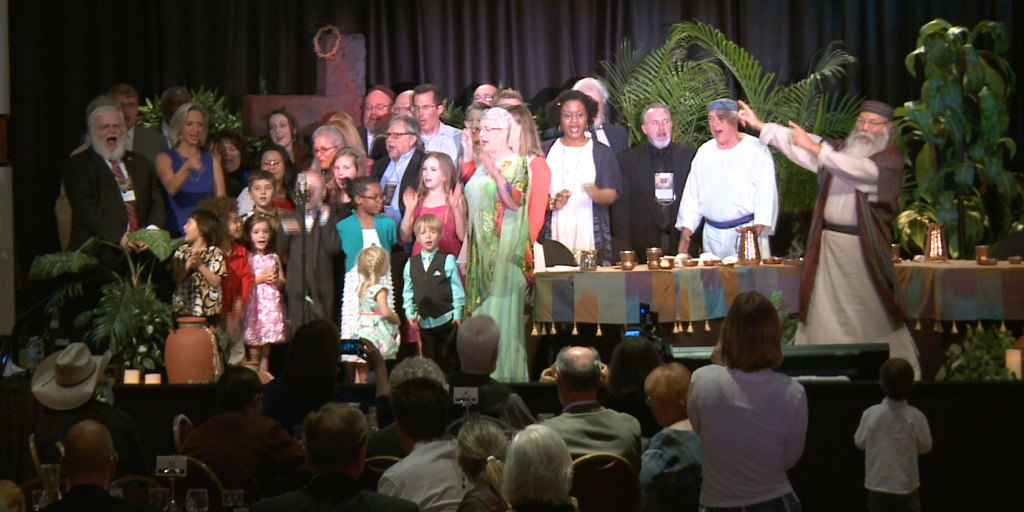 BY RICH TENORIO, Times of Israel—

While the majority of American Jews sit down to a seder this Passover as usual, they might not be aware that many Christians will hold seders of their own.

Some of the latter will present both the traditional Jewish narrative and the importance of the holiday to Christianity. Others combine the two narratives into one, in which Jesus Christ stars as the paschal lamb.

“It emerged out of a more contemporary understanding of the Jewish roots of Christianity, the Jewish roots of Jesus,” said Alan J. Avery-Peck, the Kraft-Hiatt professor in Jewish studies at the College of the Holy Cross in Worcester, Massachusetts. “A desire to get a better handle on the experience of what Jesus would have had in his earthly moments of the Last Supper, a Passover seder.”

The Christian seders are taking place across the US this week heading into Good Friday (April 14) and Easter Sunday (April 16). They include relatively small events, as well as large-scale extravaganzas such as “The Road to Redemption” on Easter weekend near Charlotte, North Carolina.

“It’s one of the largest Passovers ever done on the planet,” said organizer Michael Rood. “There are some very large Orthodox get-togethers, but this is a whole weekend. We’re running at 620 .”

Rood is a Messianic Jew, or a Jew who believes that Jesus is the son of God. He is the leader of what is described as the world’s largest Messianic congregation.

“I love to tell the Passover story,” Rood said. “People are on the edge of their seat. People are at the table weeping.”

Christian-Jewish fusion
Rood and fellow Christian leaders are preparing matzah, wine and haggadah for seders. At some Jesus is a guest; others, he is at the head of the table. And while the Last Supper occurred two millennia ago, Christian Seders are much younger. Avery-Peck places their genesis within the past 20 or 30 years.

He notes they occur “mainly within the evangelical church,” which tries “to be more experiential, more Bible-oriented, Jesus’ actions, experiences and roots become significant.”

At Calvary Church, an evangelical congregation of about 3,000 in Santa Ana, California, Pastor Matt Davis tries to connect the Old and New Testaments.

“We sit around the table and go through the haggadah and all the elements represented,” said Davis, who was born into a Jewish family and is now a Messianic Jew. “It’s fun. We’ll teach them some Hebrew. I have some atomic horseradish to give my Gentile friends. I give them an extra helping… It’s one of my favorite moments.”

“We walk through the significance. What we’re trying to find is Jesus. Where is Jesus evidenced in this Passover meal?” he said.

When Davis blesses the unleavened bread for his capacity audience of several hundred, he notes the Hebrew word “lechem.”

‘What we’re trying to find is Jesus. Where is Jesus evidenced in this Passover meal?’
“Jesus’ body came up from the earth — lechem,” Davis said. “Jesus is the bread of life. Jesus was born in a town called Beit Lechem — Bethlehem, the House of Bread.”

Some Christian seder leaders have written their own haggadas, including evangelical pastor Jeanne Nigro, in preparation for her event in Plano, Texas, April 12.

“What I teach is two, two and a half hours,” said Nigro, who also preaches on CDs, on TV and in her book “Unshaken.” “I’ll stop at each point and teach — the Cup of Sanctification, what it reveals about how God sees you… The Cup of Redemption, what it says about your worth to God.”

“The matzah bread is pierced, striped, without leaven. Jesus was without sin. His body was pierced, striped, bruised,” she said. “We look for symbolism. Jesus in the Passover. And what Passover reveals about God, His character, and Jesus as the Messiah. Nothing is a coincidence.”

Rood’s “Road to Redemption” has been going on for several years. It is a multi-day event that begins on April 14 with participants making their own matzah.

“I have constructed four gas-fired sahjes like the Bedouins’ in Egypt to cook flat bread,” said Rood, who has lived in Israel for the past 19 years. “Over 600 people make their own matzah for the seder the following evening.”

The Saturday seder itself “is a grand occasion,” he said. “Usually, I take four hours to tell the story. We do not use a traditional haggadah. Every year, I make it different.”

‘We do not use a traditional haggadah. Every year, I make it different’

Last year, Rood wrote a one-man play about “one year after the death and resurrection of Yeshua .” This year, the theme will be 100 years later, “after the destruction of the Temple, just before the Bar Kochba rebellion.”

Actors will wear “ancient mythical garments,” he said. “We’ll step out of America, out of modern Israel, strip away 1,900 years of traditions to what they would have been doing in the scriptures, what was Passover to them back in the first century.”

The Rev. Skip Wachsmann leads an evening seder for 75 people at Lord of Life Lutheran Church in Austin, Texas, using a Jewish haggadah.

“We stand in solidarity with our Jewish brothers and sisters with that ceremony,” Wachsmann said. “I think, for us at least, it invites us to journey outside our own faith. It’s very easy for Christians to get caught up in that, because it’s our way, this is the only way.”

To the northeast, near Dallas, Pastor Drake Torp-Pedersen leads seders for almost 200 people at Terrell Bible Church, a nondenominational Protestant congregation. Torp-Pedersen studied the Old Testament and Semitic languages at Dallas Theological Seminary, and spent one year in graduate school at the Hebrew University of Jerusalem.

“We try to be more like Jesus’ time when the Temple was still there,” Torp-Pedersen said. “We have lamb — I suppose Sephardics do as well.”

“A lot of times, Gentile Christians are willfully ignorant, sometimes even surprised by the connections between Judaism and Christianity. It’s something I try pointing out for interfaith understanding. The thought of anti-Semitism from a church is completely bizarre when we’re reading about all we owe to the Jewish traditions out of which the church grew.”

Before the Christian seder, he said he had “zero experience and zero with any Jews.”

Opening doors
This year, Nadine Epstein, the editor of Moment magazine, issued a public call for Jews to invite non-Jews to a seder.

“If as many Jewish families as possible invite an average of two non-Jews to a Seder this year,” Epstein wrote in an online column, “some 6 million non-Jews will be able to experience a seder this year and at the very least taste traditional Passover foods and learn of their significance — not to mention gain invaluable insight — into Jewish values and understand the connection Jews feel to the land of Israel.”

Epstein wrote that the invitations would help combat rising anti-Semitism.

Interfaith seders have become a tradition of their own.

“Generally, they are viewed positively in Jewish and Christian communities,” Avery-Peck said. “In Boston, there is a diplomats’ seder with all of the different representatives from countries in the Boston diplomatic corps. It’s a seder experience where they reflect on freedom as important to all of us.”

Avery-Peck said that in forums such as campus chaplains’ offices interfaith seders are viewed as a “very positive, authentic sharing of Jewish experience, history and ritual with non-Jews.”

“It’s an opportunity to share values they connect to — religious freedom, freedom from slavery, mutual acceptance,” he said.

However, said Avery-Peck, “The greater level of questioning and some criticism is when Christians hold their own seders apart from actual Jewish involvement.

“It would be viewed as impolite if I, as a Jew, have a model baptism or ceremony for some reason. There is some criticism of Christians taking over the seder — it’s almost supersessional,” he said.

Ironically, hundreds, if not thousands, of Christians across the US are doing just what Epstein recommended — participating in the Jewish Passover ritual — through Christian seders. And while these seders may not be recognizable to Jewish audiences, their leaders speak positively about Jews and Israel.

“I don’t think many Christians have an understanding that Jesus was Jewish,” Nigro said. “We created our version of Jesus and God. We see the Old Testament as being old, obsolete, not in effect anymore. It grieves my heart.

Quite the opposite for Davis, the Messianic Jewish pastor at Calvary Church. He says he is “just as much of a Jew as I have been — I believe more so.”

His family celebrates Shabbat together and “we love the Jewish people,” he said. “We support the Jewish community. We love the nation of Israel. We’re Zionists.”

Ramadan Violence Raging All Over Israel But Focused On Jerusalem
May 10, 2021

Purim miracles: From Saddam to corona and beyond
February 25, 2021