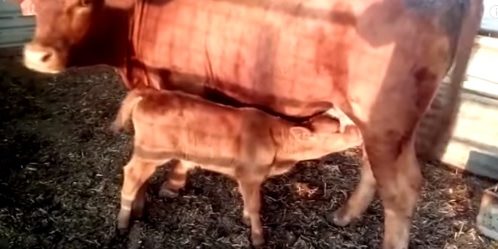 The Temple Institute is working together with an Israeli cattleman to raise a red heifer in Israel, in strict accordance with the Biblical commandment. The project is the culmination of years of research at the Temple Institute that fuses ancient religious texts and modern science.

“We’ve been working on this for decades. The red heifer has to be supervised and cared for in a special way since its birth. And it’s very complex,” Rabbi Chaim Richman, the International Director of the Temple Institute told Tazpit News Agency.

Over two thousand years ago, during the near millennium that the two Temples stood in Jerusalem on the Temple Mount, the ashes of the red heifer were used by the priests for purification purposes.

In order to carry out this project, the Temple Institute has joined forces with an experienced Israeli cattle rancher who is an expert in the science of animal husbandry, under the halachic supervision and guidance of the rabbis of the Temple Institute. The cattle rancher is utilizing the technique of implanting the frozen embryos of the Red Angus cattle, which originally come from North America in Israeli domestic cattle.

“We can select proper candidates from those calves that are born. They will be cared for under specific instructions,” explained Rabbi Richman to Tazpit.

The end result of this program will be the introduction of the Red Angus breed into Israel, said Rabbi Richman, who also added that it would improve the quality of cattle in Israel. This method, authorized and approved by Israel’s Ministry of Agriculture, has already proven successful with the birth of a number of male Red Angus.

Raising a perfect red heifer in accordance with the Biblical commandment requires advance planning, preparation and constant supervision according to Rabbi Richman. In order for a red heifer to be considered kosher for Biblical use, it must literally be raised from birth under specific conditions and in a controlled environment, which has never been attempted in Israel during modern times.

“Three decades of research and preparation have led us to this special day. During this period known as the ‘Three Weeks,’ as world Jewry mourns the destruction of the Second Holy Temple, the Temple Institute has taken a bold move towards the third. Having already prepared over 70 sacred vessels including the golden menorah and High Priest’s gemstone-encrusted breastplate, now is the time to fulfill the commandment of the Red Heifer,” said Rabbi Richman.

In order to raise funds and awareness, the Temple Institute has launched a crowd funding campaign called “Raise a Red Heifer in Israel” on Indiegogo, following the success of the organization’s campaign last year that raised over $100,000 towards the architectural plans of the Third Temple. Within a day of the initial launch for the red heifer campaign, nearly $11,000 has been raised so far.

The Temple Institute aims to raise $125,000 for the red heifer project and according to the fundraising page on Indiegogo, contributions will go towards embryo implantation, veterinary care and feed, identification and separate care of candidates for the perfect red heifer, as well as publication of halachic research and findings. The successful introduction of suitable red heifers to Israel is the first project of a multi-level program that will span a number of years.

According to Jewish tradition, a red heifer is a female cow that is three years of age with a particular reddish hue and cannot have even two hairs of any other color. It cannot be used for any type of labor and must be blemish free. The biblical commandment regarding the red heifer can be found in the Book of Numbers and is considered as the only antidote to the state of impurity brought on by death.

“The emergence of the red heifer is not some mystical miracle,” elucidated Rabbi Richman. “It is a practical development alongside Torah knowledge and science.”

The Temple Institute is a research and education center founded in 1987 by Rabbi Yisrael Ariel, who served in the paratrooper brigade that liberated the Temple Mount during the Six Day War in 1967. In addition to educational activity, the institute has also recreated over 60 sacred vessels for use in the third Temple, which can be seen at the Temple Institute’s Visitors Center in the Old City of Jerusalem.