The Palestinians No One Talks About 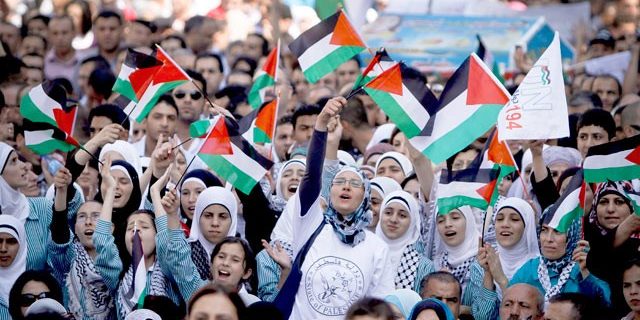 The international community seems to have forgotten that Palestinians live not only in the West Bank and Gaza Strip, but also in a number of Arab countries, especially Syria, Jordan and Lebanon.

Western journalists covering the Israeli-Palestinian conflict regularly focus on the “plight” of Palestinians who are affected by Israeli security policies, while ignoring what is happening to Palestinians in neighboring Arab countries.

These journalists, for example, often turn a blind eye to the daily killings of Palestinians in Syria and the fact that Palestinians living in Lebanon and other Arab countries are subjected to Apartheid and discriminatory laws.

A Palestinian who is shot dead after stabbing an Israeli soldier in Hebron receives more coverage in the international media than a Palestinian woman who dies of starvation in Syria.

The story and photos of Mahmoud Abu Jheisha, who was fatally shot after stabbing a soldier in Hebron, attracted the attention of many Western media outlets, whose journalists and photographers arrived in the city to cover the story.

But on the same day that Abu Jheisha was brought to burial, a Palestinian woman living in Syria died due to lack of food and medicine. The woman was identified as Amneh Hussein Omari of the Yarmouk refugee camp near Damascus, which has been under siege by the Syrian army for the past 670 days. Her death raises the number of Palestinian refugees who have died as a result of lack of medicine and food in the camp to 176.

The case of Omari was not covered by any of the Western journalists who are based in the region. As far as they are concerned, her story is not important because she died in an Arab country.

Had Omari died in a village or refugee camp in the West Bank or Gaza Strip, her story would have made it to the front pages of most of the major newspapers in the West. That is because they would then be able to link her death to Israeli measures in the West Bank or the blockade on the Gaza Strip. The same journalists who report about the harsh economic conditions in the West Bank and Gaza Strip do not seem to care about the Palestinians who are being starved and tortured to death in Arab countries.

Nor are the journalists reporting to their readers and viewers the fact that more than 2800 Palestinians have been killed in Syria since the beginning of the civil war there four years ago. A report published this week by a Palestinian advocacy group also revealed that more than 27,000 Palestinians have fled Syria to different European countries in the past four years. The report also noted that Yarmouk camp has been without electricity for more than 730 days and without water for 229 days.

These Palestinians are unfortunate because they do not live in the West Bank or Gaza Strip. The international community pays attention to Palestinians only when they are “victims” of Israel.

Similarly, the international media continues to ignore the “plight” of Palestinians living under Palestinian Authority (PA) rule in the West Bank and Hamas rule in the Gaza Strip.

In the West Bank, PA security forces continue to arrest Palestinians who post critical remarks on Facebook or speak out against Palestinian leaders.

On April 25, the PA arrested journalist Ahmed Abu Elhaija of Jenin as he was on his way to attend a conference in Jordan. No reason was given for the arrest, which is not the first of its kind involving Palestinian journalists and bloggers.

Another story that has been ignored by the international media is that involving Jihad Salim, a member of the Hamas-affiliated Islamic Bloc at Bir Zeit University in the West Bank. Salim was arrested by Palestinian security officers shortly after the Islamic Bloc won the student council election of the university.

Upon his release, he said that he had been physically assaulted by his interrogators, who questioned him about the reasons why the Islamic Bloc won the vote. “The Palestinian Authority does not want democracy,” his mother said after his release. “Why are they arresting students and who does this serve?”

The situation regarding the Gaza Strip is not much different. Most stories that appear in the international media ignore the practices and violations committed by Hamas against Palestinians. Take, for example, Hamas’s recent decision to impose a new tax on a number of goods. The decision has drawn sharp criticism from many Palestinians, with some openly calling for a rebellion against Hamas.
Again, this is not a story of interest to many Western journalists based in the Middle East, mainly because Israel is not involved.