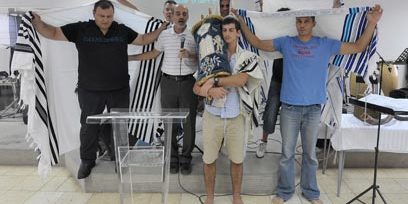 Jerusalem prides itself on being a center of business activity in the Start Up Nation, but one upcoming investor conference is causing a stir in the Holy City. The Israel Business Forum, hosted by the Messianic organization First Fruits: The Israel Center for Economic Advancement, has put some local groups on edge.

On their website, First Fruits has described their three day conference, which is taking place April 27 – May 1, as a networking opportunity where like minded investors could meet “over 100 Israeli Messianic and Arab-Christian entrepreneurs…from all parts of the Body of Messiah in Israel.” Participants were told via a special conference invitation, “there is no more effective way to truly connect with the local Body of Messiah than to come in person.”

First Fruits chairman and CEO Mordechai Wiseman explained to Breaking Israel News that, “the focus of the conference is the marketplace and business opportunities in Israel, while the focus of the people coming from overseas and locally is their faith in Yeshua,” using the Hebrew name for Jesus. “We believe the Messianic community shouldn’t be a ghetto and should engage with the larger Israeli community.”

The Messianic effort to mainstream into the larger Israeli economic community is appropriately being led by Wiseman. Mordechai (Mordy) Wiseman represents a new breed of Messianic Jew who has lived in Israel many years, speaks fluent Hebrew and has served in the IDF. An unassuming young and modern looking business-man living in the north of Israel, Wiseman started First Fruits whose vision is “to see the Body of Messiah in Israel flourish and prosper, fulfilling its mandate to disciple Israeli society and the nations,” according to their website.

Wiseman’s efforts are paying off and while other Messianic activities occur in closed corners or off to the side of mainstream Israeli society, the Israel Business Forum is being co-sponsored by not only leading Messianic organizations such as Kehila: The Messianic Community Website, and E.L.Y. Israel, but the well known and well respected OurCrowd, Israel’s largest equity crowdfunding platform.

OurCrowd Director of Investor Relations Asher Abraham told Breaking Israel News that the conference sponsorship didn’t pose any conflict for his company. “OurCrowd is definitely interested in working with the Christian community. We don’t take a stand about any of their beliefs, it’s just business. I don’t have a problem with how they describe themselves as long as it makes sense and is good for Israel and good for our investors.”

Abraham, who will be speaking at the Israel Business Forum, explained that his firm sponsors many investor conferences in Israel “and the fact that they are Messianic is not relevant.”

That’s not how everyone sees it.

The Messianic movement in Israel has previously come under fire for using commerce as a front for their missionary activities, and activists contend that is the motivation behind the Israel Business Forum as well.

Yad L’achim, an Israeli “counter-missionary” organization asserts that the Israel Business Forum is just a front to cover up First Fruit’s proselytizing agenda.

“The name itself, ‘First Fruits,’ alludes to their sinister motives,” a Yad L’achim spokesman told Breaking Israel News. “They are making a subtle reference to their desire to harvest and gather Jews into their fold. These Messianics are once again using business as a way to provide legitimacy to their illegitimate missionary activities in Israel.”

The Israel Business Forum will be taking place at the Yehudah Hotel in the Jerusalem neighborhood of Givat Masuah. Besides for Wiseman, Messianic presenters include Calev Myers and Evan Liberman.

According to his website Wise Money Israel, Liberman is “the first Israeli Messianic believer to hold a license with the Israel Securities Authority.”

Calev Myers himself is a well known member and advocate of Israel’s Messianic community. Myers is the owner and manager of the Jerusalem branch of the well known Yehuda Raveh and Co. Law Offices and his organization The Jerusalem Institute of Justice has defended many Messianics in Israeli court.

Even those who are supportive of close Jewish Christian relations are weary of partnering with Messianics and puzzled by OurCrowd’s involvement.

“Before you sponsor a conference like this in Israel, you should be hypersensitive to all the issues involved,” said David Nekrutman, Executive Director of the Center for Jewish-Christian Understanding and Cooperation (CJCUC), run under the leadership of Rabbi Shlomo Riskin. “What you believe in the eschaton is one thing, but if it translates into converting Jews now, we can’t work with you,” he told Breaking Israel News.

Nekrutman explained to Breaking Israel News that the CJCUC works with many Evangelical Christians even though they disagree on theology. “Sponsoring such an event causes problems for those of us who have been building bridges between Christians and Jews for years.”

Christ’s Sacrifice, Suffering, and Death Appreciated Even More When You Understand it in Medical Terms
April 22, 2019