Obama Is on a Collison Course With the God of Israel 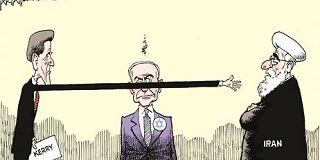 The more President Obama’s actions affect or jeopardize Israel’s security, the stronger the response will be from the God of Israel as evidenced in Scripture. This will have enormous implications for the United States.

The Obama administration keeps speaking about its unprecedented security cooperation with Israel, but what good is that if Iran gets nuclear weapons? What good is it if Iran deploys missiles in Syria and Lebanon, or Hamas takes over the Palestinian Authority, entrenches itself in the mountains of Judea and Samaria and brings in arms from Iran and Turkey? What good is it if Iran takes control of Yemen and the Red Sea?

A nuclear deal with Iran and a forced Israeli-Palestinian agreement would endanger Israel’s existence.

It very typical of the Obama administration to speak publicly about its security cooperation with Israel to win assurances, while denying that its actions endanger Israel.

Obama has twice said his administration has Israel’s back, when in reality it’s Congressional Republicans that have Israel’s back, and they are attacked by the White House every time a new pertinent security issues arises. Can you imagine how vulnerable Israel would be without its defenders on Capitol Hill?

This is the White House that used its political and financial resources to influence the Israeli elections and attempt to defeat Benjamin Netanyahu.

This is the White House that had the Pentagon declassify a report in February that “revealed Israel’s nuclear secrets” before Netanyahu’s March 3 speech to Congress. The timing of this is not a coincidence; it is a continuation of a frontal barrage that puts Israel’s very existence at risk.