Europe’s Jews ponder: Is it time to flee again? 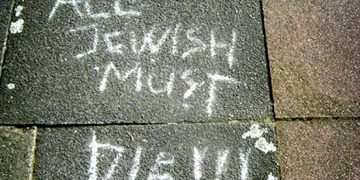 Eighty years ago, Jael Botsch-Fitterling’s parents decided something was very wrong in Germany, the nation they called home. Chancellor Adolf Hitler had just named himself fuhrer, and anti-Semitism was becoming national law. Her parents and other relatives packed up and fled.

Because of that move, six years later she was born in Jerusalem in what was then Palestine. When she was 7, the land beneath her feet became Israel, making her one of the original Jews in a new Jewish homeland. All because her parents had sensed in time that Germany was becoming very dangerous for Jews.

Then, in the 1950s, they trusted their instincts again and returned to Germany. Botsch-Fitterling has never left.

But today, in the wake of the Charlie Hebdo terror attacks in Paris, she’s been thinking about that first decision to leave – thinking about it quite a bit, in fact.

The Charlie Hebdo attacks ended in a bloodbath inside a Jewish market in Paris with four Jewish men slaughtered. And there’d been other attacks: In 2012, a so-called “lone wolf” killed three students and a teacher at a Jewish school in Toulouse, France; last May, an attacker with links to the Islamic State killed four people at the entrance to the Jewish Museum in Brussels.

“I love my life in Berlin,” she said. “I love my home, and my children and grandchildren are here. But we can’t escape history. I just wonder, as I look around Europe today, about those who stayed until it was too late the last time.”

She’s hardly alone in wondering if there will again come a time when Jews won’t be able to remain in Europe. It isn’t an idle concern. Even before the Jan.7-9 attacks in Paris, there were signs of rising hostility.

A 2013 European Union survey of “those who consider themselves to be Jews” in eight nations found that two-thirds believed anti-Semitism to be “a very big” or “fairly big” problem. In France and Hungary, half those questions believed it was a very big problem. And a quarter of all respondents believed that they’d been discriminated against within the previous 12 months because of their religion.

The report described a broad range of anti-Semitic acts, from graffiti to the desecration of Jewish cemeteries and monuments. There are many examples: This week in Belgium there were reports of the miniature brick Holocaust memorials known as “stumble stones” being defaced. Over New Years Eve in Berlin, a 26-year-old Israeli man was beaten and spat upon after filming a group of young men singing anti-Semitic songs on the subway.

A July protest in Paris of Israel’s actions in Gaza led to anti-Semitic insults being shouted and the vandalism of Jewish-owned businesses and a synagogue. Similarly, a Gaza protest in Berlin included anti-Semitic chants.

Morten Kjaerum, the director of the European Union’s Agency for Fundamental Rights, which put together the survey, declared this week that no incident should be too small to escape notice. “We must stamp out all forms of anti-Semitism, from the blatant acts of vandalism of Jewish sites to the quiet acceptance of stereotypes and subtle forms of hate speech online and off,” Kjaerum said.

Avi Mayer, a spokesman for the Jewish Agency for Israel, said the numbers are expected to climb this year, with projections of between 10,000 and 15,000 Jews leaving France for Israel. The number of calls to the agency from French Jews worried about their future has tripled in recent weeks, he said.

“The French government has gone to great lengths to assure Jews that they are protected,” he said. “This is both a positive and a negative. If you send your child to a school with armed guards surrounding it, it’s both a sign that the threat is taken seriously and a reminder that the threat is very serious.”

Even before the Charlie Hebdo attack, French Prime Minister Manuel Valls was expressing concerns about the Jewish exodus. “If 100,000 Jews leave, France will no longer be France. The French Republic will be judged a failure,” he told Atlantic magazine. He’s repeated that sentiment many times since.

And it’s not just radical Islamists fueling the worry. Also growing is right-wing extremism that many fear attracts anti-Semites: the National Front in France, the United Kingdom Independence Party and Patriotic Europeans Against the Islamization of the West in Germany.

Neither trend bodes well for Jews in Europe.

In the United Kingdom, the assistant commissioner for counterterrorism announced that security would be beefed up at Jewish institutions. “The global picture of terrorist activity does give us heightened concern about the risk to the Jewish community in the UK,” a statement said.

Of all places, Berlin may be a bright spot for European Jews. Adolf Hitler’s “final solution,” which murdered 6 million Jews, wiped out Berlin’s thriving Jewish community in the 1930s and 1940s. Today, however, 17,000 Israeli citizens, by official count, live in the city. Unofficially, Jewish leaders say the number is closer to 30,000 – and growing. Official German statistics for the most recent year available, 2013, show 2,700 Israeli arrivals, a record.

Those numbers could rise. Deidre Berger, director of the Berlin office the American Jewish Committee, said that despite history, there’s reason for the trend. Germany has done a better job than other European nations of protecting Jewish life. It starts, she said, with a German intelligence community that very actively tracks anti-Semitic threats.

But that doesn’t mean Berger is sanguine when she considers the 5,000 mostly young Europeans who’ve gone to Syria to fight for the Islamic State and other terror organizations or the hundreds who’ve returned.

“The threat to European Jews appears to be spreading,” she said. “This requires a more active government response, across the continent.”

Her counterpart in the American Jewish Committee’s Paris office, Simone Rodan-Benzaquen, said she hopes the Charlie Hebdo attacks served as a wake-up call for European governments. She said that while too many young Muslims in and around Paris, Marseille and other French cities drifted toward the radical, violent fringe, the French failed to properly counter the message. That, she said, “says something very profound about French society, and it’s going from bad to worse.”

The situation, she says, has come to this: “Every Jew in France, in Europe really, has asked themselves whether they have a future here. Most still answer yes, and so they remain. But the pressure is building.”

In Berlin, Botsch-Fitterling admits it’s all been unnerving. Only once before in the 45 years she’s lived in her apartment in southwest Berlin has she pondered about moving back to Israel. That was in the 1980s, when she sensed an increase in anti-Semitism. She believes she was “one insult away” from leaving.

“I am thinking about it again,” she said, surrounded by the books she loves, above the crowded street she loves, in the apartment she loves. “But is it even possible for a Jew to live in Berlin, or in Europe today, without thinking about leaving?”