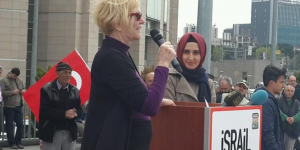 The anti-Semitism at the heart of the Boycott, Divestment and Sanctions (BDS) movement targeting Israel was again laid bare yesterday, as prominent activists from the campaign took to social media to advance the conspiracy theory that yesterday’s terrorist attack against French satirical magazine Charlie Hebdo was carried out by the Mossad.

Leading the charge was Greta Berlin, a spokesperson for the Free Gaza movement, an organization that has been closely involved with attempts to break Israel’s blockade against the Hamas regime in Gaza. In a Facebook posting, Berlin declared, “MOSSAD just hit the Paris offices of Charlie Hebdo in a clumsy false flag designed to damage the accord between Palestine and France…Here’s hoping the French police will be able to tell a well executed hit by a well trained Israeli intelligence service and not assume the Muslims would be likely to attack France when France is their freind (sic.) Israel did tell France there would be grave consequences if they voted with Palestine. A four year old could see who is responsible for this terrible attack.”

Berlin’s colleague, Free Gaza co-founder Mary-Hughes Thompson, echoed those same views in a posting on Twitter. “#Hebdo killings indefensible. Can’t help thinking #JSIL Mossad false flag though. Killers spoke with perfect French accents. Time will tell,” she wrote. Even the International Business Times, a more mainstream publication, explicitly asked, “Charlie Hebdo Attack and Mossad Link: Is Israel Venting Its Fury for France’s Recognition of a Palestinian State?” although the offending item was quickly removed by an editor at the publication.

The term “JSIL,” which stands for “Jewish State in the Levant,” is a derogatory term for the State of Israel coined by the American anti-Semitic propagandist Max Blumenthal, which seeks to compare the Jewish state with the Islamic State terrorist organization. A number of individuals who objected to Thompson’s use of the term, as well as her endorsement of the Charlie Hebdo conspiracy theory, received a volley of abuse from her in response, including such choice phrases as “Zionist trash.”

Free Gaza, which enthusiastically supports the BDS campaign and shares Hamas’s view that the State of Israel should be eliminated as sovereign entity, lists a number of vocal anti-Zionists on its Board of Directors, including James Abourezk, a former Senator from South Dakota; Noam Chomsky, the radical academic who has actively defended Holocaust and other genocide-deniers; and Baroness Jenny Tonge, a member of Britain’s House of Lords infamous for her frequent attacks on the UK Jewish community’s pro-Israel orientation.

Berlin’s remarks about the Charlie Hebdo slaughter are not the first time she has promoted anti-Semitic conspiracy theories. In 2012, even some Jewish anti-Zionists were angered by her endorsement of a video featuring an obscure anti-Semite named Eustace Mullins, who charged, in the words of Berlin’s tweet at the time, that “Zionists operated the concentration camps and helped murder millions of innocent Jews.”

Among Berlin’s defenders on that occasion was Larry Derfner, a former Jerusalem Post columnist who now writes for an anti-Zionist publication based in Israel named +972. Derfner took exception to Berlin being labeled as a “crazed Jew-hater” and attempted to portray her as a responsible, mainstream voice.

In August 2012, Berlin again blamed Israel for an attack by Islamist terrorists in Sinai in which 16 Egyptian soldiers were killed, asserting that the atrocity “works to Israel’s benefit.”

Since the Al Qaeda atrocities of September 11, 2001, the theme of clandestine Israeli involvement in terrorist outrages has been extremely popular with sections of the left, as well as with neo-Nazi and White Supremacist groups, Islamist organizations, and repressive regimes in countries like Iran and Venezuela.