Evangelical support for Israel? Look to the east 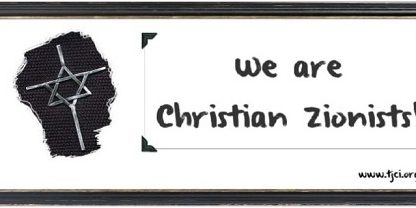 There has been a great deal of press lately regarding the supposed rapid waning of evangelical support for Israel. It seems that at very nearly the same moment in which portions of the global Jewish community in general (and in Israel specifically) have become more fully aware of and connected with evangelical support and friendship, numerous pundits are suggesting that this support is unraveling. Various reasons are suggested for this, including a general move toward a more “social justice” mindset among younger evangelicals, in which the Palestinians are viewed as the underdogs and Israel as the aggressor. Events such as the now infamous Christ at the Checkpoint conference and the lesser known Telos Group based in Washington, DC, are pointed to as the J Street and Peace Now of the younger evangelical set.

As someone who has spent the past 20 years in almost daily Jewish-Christian dialogue and cooperation, I understand the fear that evangelical support may appear fragile right now. But I would like to offer another perspective.

In fact, I think we are just beginning to see its strongest expressions.

What indeed is happening, is that the global center of evangelical Christianity, which is by far the most rapidly growing stream of Christianity, is no longer North America.

It has shifted. It has moved.

Prof. Philip Jenkins delineates this in his brilliant work The Next Christendom. And, true to form, wherever this evangelical brand of Christianity expands, its philo-Semitic theology is evident.

Because the largest Jewish population center outside Israel is in America, it is natural that Israel and the Jewish community view the evangelical movement primarily through the lens of American evangelicalism. But again, it is abundantly clear that the future of the evangelical church has already moved.

Just a few anecdotal references from the past week in Jerusalem will demonstrate this.

The annual Christian Feast of Tabernacles celebration, sponsored by the International Christian Embassy Jerusalem, has been happening for more than 30 years now. But these past few years, the largest group by far comes from Brazil, under the leadership of evangelical pastor Rene Terra Nova, who has 50,000 people in his main congregation, and approximately 3 million Brazilians in his church network.

Every year now, he has upward of 2,500 Brazilians coming to this event. The fervor of these Brazilians for Israel rivals something you would see on TV at the World Cup. The opening night of this event saw 5,000 pilgrims in the desert at Ein Gedi, with the guest preacher being a pastor from Nigeria who has 45,000 in his congregation.

At the same time, across town, Tom Hess’s International Prayer Convocation on the Mount of Olives brought almost 1,500 African evangelicals.

This is an event which is growing every year. There was another conference going on at the same time in one of the Jerusalem hotels with close to 500 Chinese who had come up to show support of Israel. Eagles’ Wings, the organization I lead, has seen amazing growth and response to our annual Day of Prayer for the Peace of Jerusalem in countries like China, Indonesia, Malaysia and Singapore.

These are hardly Bible-belt areas like Nashville, Tennessee; yet, amazingly, there are massive groups in all these places standing strong in a pro-Israel mindset.

We could go on and on.

Joseph Prince, for example, has emerged as a massive evangelical voice with a global media empire. He consistently references Israel and the Jewish people in glowing terms. Where is he based? Singapore.

Many other nations and parts of the world do not have a strong local Jewish presence, certainly nothing coming remotely close to the size of the organized Jewish community that exists in America.

So, the Jewish community globally and the State of Israel are often less aware of these major leaders and movements who are very supportive and ready to be of assistance.

Secondly, evangelicalism is a grassroots movement and is only semi-organized; and its ascendancy is very young in these Asian/African/Latin American areas – perhaps only 50 or 60 years old in some of these nations, where American missionaries first brought evangelicalism in the great missions era of America in the early 1900s. So, the indigenous evangelical leadership of these nations is just now coming into a place of strong organization and growth.

Finally, I would offer that in the West – where evangelicalism has definitely plateaued and is perhaps waning – nevertheless, there are signs that younger evangelicals are increasingly being introduced to a “re-packaged” Israel which fits their generation’s values. Their parents’ and grandparents’ fervor for Israel was often contextualized by the rebirth of the State of Israel, which was seen as a prophetic sign in the end times fever which gripped America in the late ’60s through the late ’80s. Today’s evangelicals are more circumspect when it comes to apocalyptic themes.

This has been a definitive shift from The Late Great Planet Earth (a famous book dealing with biblical prophecy from that time) days of their parents, where numerous dates were often set for the Second Coming of Christ. Today’s evangelicals still believe in the Second Coming of Christ, but they are also much more concerned about the way their faith is being played out in real life issues such as human rights and the environment.

Their faith is still zealous, but it is more sophisticated and willing to honor the truth of other faith traditions as well.

This, of course, bodes well for Jewish-Christian dialogue.

It is understandable to have concern over the perception of waning evangelical support for Israel, which may be the case in America. The American concern should be dealt with through reintroducing Israel to a younger evangelical audience, not in terms of biblical prophecy or apocalyptic scenarios, but in terms of global human rights. The Eagles’ Wings Israel Experience College Scholarship, which is a kind of Birthright Israel for Christians, does just that. But globally, there are excellent indications of growing organized support for Israel from new corners of our planet. Jerusalem is truly becoming a “house of prayer for all nations.”

The writer is founder and executive director of Eagles’ Wings, a global movement of churches, ministries and leaders.