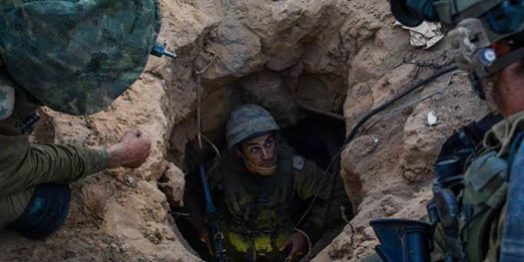 Unlike previous conflicts, where a operational mistakes by Israeli forces targeting terrorists caused civilian casualties and raised international protests, in this case Israel had made no major blunders.

Israel’s offense, this time, was its success–which exposed the idiocy of Obama’s foreign policy.

Despite high-minded statements about Israel’s “right to defend itself,” the Obama administration had done all it could to prevent Israel from exercising that right. After Hamas tried to use its tunnels to mount a terror attack that targeted Israeli civilians directly, it became clear that Israel’s self-defense required not only taking out the Hamas rocket launchers but also destroying a tunnel system far more extensive than was previously known.

It was then (“dafka,” as the Israelis say) that Obama sent Secretary of State John Kerry–that supposed friend of Israel, seething with rank contempt for the Israeli war effort–to crash the diplomatic process. Even the Palestinian Authority objected, accusing Kerry of “appeasing” Turkey and Qatar. Egypt, which was hosting the ongoing talks, even showed its contempt for Kerry’s intrusive efforts by subjecting him to a security search.

Kerry’s mission was a bizarre move by an administration that came to power in 2008 promising not to be the stereotypical “ugly Americans.” Yet Obama was determined to represent Turkey–whose Islamist leader, now launching a second flotilla to Gaza under naval escort, is Obama’s best friend in the Middle East–as well as Qatar, which hosts Taliban leaders and ex-prisoners on Obama’s behalf as he seeks an exit from Afghanistan.

Obama also saw the conflict in Gaza as an opportunity to regain leverage over Israel.

It was clear that Israel was emboldened to counterattack Hamas because of the Iron Dome system, which Obama helped fund. Obama set about threatening that defense–first with the FAA canceling flights despite an Iron Dome battery at Ben Gurion Airport, then by having the Senate risk future Iron Dome aid by tying it to disputed funding for illegal aliens.

The fact that Israel resisted these pressures came as a surprise to Obama, who underestimated the unity of the Israeli public behind the war effort.

Mere hours before Israeli Prime Minister Benjamin Netanyahu’s Cabinet rejected Kerry’s ceasefire proposal–which would have rewarded Hamas for its terror by opening Gaza’s border–unanimously, the Obama administration actually expected that it would pass. It was an historic humiliation.

Kerry returned home–stopping in Paris to meet with Turkey and Qatar, confirming both Israeli and Palestinian suspicions–as Obama’s critics enjoyed a good laugh at his expense.

“Remember: nothing riles the White House more than the appearance that Israel is supplying ammo to Obama’s political enemies, as it did on Sunday,” wrote Chemi Shalev of Ha’aretz, explaining Obama’s motive to impose by fiat what Kerry could not negotiate.

The result of Obama’s political vanity–or, less charitably, his attempt to integrate Islamist extremists into the mainstream of Middle Eastern politics, whether the Iranian regime or the Muslim Brotherhood–is that the U.S. is effectively acting as the patron of Hamas.
Obama is isolating Israel, even using the morally twisted UN to do so–yet in so doing, Obama is isolating himself even more and doing lasting damage to relations with Israel.

Israelis–with a longer memory than Obama’s political career–look back at the past ten years and see Gaza as a creation of hapless American foreign policy by both Republican and Democratic administrations.

It was George W. Bush who applauded the Gaza disengagement in 2005, then insisted in 2006 that Hamas participate in Palestinian elections, and sent Condoleeza Rice on a hopeless mission to bring peace in in 2007 and 2008.

It was Obama’s imminent inauguration that brought Operation Cast Lead to a halt in 2009, the last time Israel threatened Hamas’s control over the Gaza Strip. Obama’s pressure on Israel in 2010, his support for the Muslim Brotherhood in 2011-12, and his weakness in Syria in 2013 emboldened Israel’s enemies.

Obama’s latest step is part of that pattern–and yet worse, because it is so obviously malevolent. It is a betrayal Israelis will not forget.
Nor will Iran. There is far more at stake here than even Hamas rockets and terror tunnels. During Operation Protective Edge, the U.S. and other western powers granted Iran a four-month extension on nuclear talks (that Netanyahu had described, at the outset, as an “historic mistake”). It is clear that Obama will do anything to keep Iran at the table–and now it is equally clear that he will do anything to deny Israel a military deterrent.

Israel now knows, with near-100% certainty, that Obama will not support it if it feels it must launch a pre-emptive strike against the Iranian nuclear program. The regime in Tehran is watching carefully, too, talking openly about the need to arm the West Bank with the weapons Hamas has used in Gaza and Hezbollah has stockpiled in Lebanon.