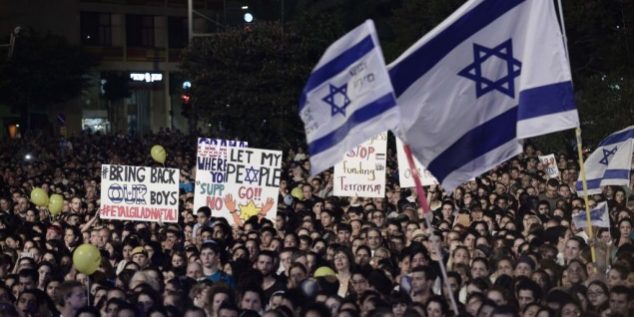 Israeli searchers on Monday discovered the bodies of three Israeli teenagers, who were abducted on June 12, north of Hebron in the West Bank.

The bodies were found near Halhul on Monday afternoon. Israeli security forces, which had been conducting extensive searches in the area, sealed off the area and declared it a closed military zone. Hebron was also sealed off.

A search team from the local Kfar Etzion field school, along with IDF soldiers from an elite unit, found the teens. The local volunteers had been asking for two weeks to join the search.

Naftali Fraenkel, 16, Gil-ad Shaar, 16, and Eyal Yifrach, 19, were kidnapped on the night of June 12 at a hitchhiking post outside the settlement of Alon Shvut in the Etzion Bloc south of Jerusalem.

The bodies were found at about 5 p.m., bound and partially buried, in an open field in a hard to access area known as Wadi Tellem. The site was less than 20 kilometers (12 miles) from where the teens had been abducted.

The parents were informed on Monday evening that the bodies had been found. Relatives gathered in the three family homes; some spokespeople for the families thanked the Israeli security forces for their efforts to locate the teenagers, and thanked the public for their support and solidarity.

State Department spokeswoman Jan Psaki called the news of the killings “a tragedy,” and urged continued cooperation between Israel and the Palestinian Authority’s security forces despite “the pain on the ground.”

The three Israeli teeangers had been killed soon after their abduction, and the bodies were apparently disposed of hurriedly. The bodies were not in a good condition when they were found, Channel 2 said. “It was a harrowing sight.”

Forensic experts identified the bodies at the scene. The bodies were flown to the Abu Kabir Institute for Forensic Medicine in Tel Aviv on Monday evening for definitive identification. Israelis placed mourning candles outside the institute later Monday night.

Israel’s security cabinet convened in emergency session. Among other decisions, it was expected to demand that Palestinian Authority President Mahmoud Abbas sever his unity government partnership with Hamas.

Israeli authorities on Thursday had named two Hamas members as prime suspects in the kidnapping.

The two, Amer Abu Aysha and Marwan Kawasme, have been missing from their homes in Hebron’s Hares neighborhood ever since the kidnapping took place. The two were allegedly in the car in which the three were abducted.

The two were still at large on Monday night, and Israel’s security forces were making intensive efforts to track them down.

IDF troops surrounded the homes of the two suspects late on Monday evening.

Hamas leaders in the Hebron area were reported to have made themselves scarce, anticipating that they would be sought by the security forces. Hamas has not taken responsibility for the kidnapping and killings; a Hamas spokesman was quoted warning on Monday night that “any Israeli response will open the gates of hell.”

IDF Chief of General Staff Benny Gantz was in the Halhul area, overseeing the ongoing operation.

Hamas officials in Hebron confirmed the two suspects were members, and said Israeli troops had targeted the men’s homes since the beginning of Operation Brother’s Keeper. The officials said troops had entered the homes several times, conducting intense searches and confiscating items as evidence.

On Sunday night, tens of thousands of people crowded into Rabin Square in Tel Aviv to show support for the families of the three kidnapped teenagers, under the banner “Singing Together for Their Return.” President-elect Reuven Rivlin and the parents of the kidnapped teens highlighted the speaker list.

Since the start of Operation Brother’s Keeper to find them, 18 days of searches had seen the arrests of over 400 Palestinians, a majority of them members of Hamas.