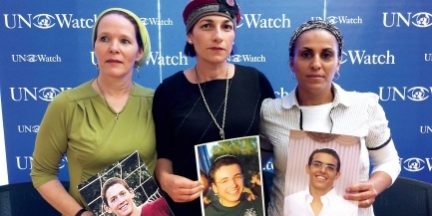 As the mothers of the other two kidnapped Israeli teens sat behind her, Rachel Frenkel, the mother of Naftali Frenkel, made a moving plea before the United Nations Human Rights Council in Geneva on Tuesday. After Frenkel’s speech, I saw two Muslim representatives outside, one from Western Sahara and the other from Morocco, and asked them for a reaction to the speech and the kidnapping in general.

“What kidnapping?” one asked. The other said, “I haven’t heard about it.” This is what happens when the world is preoccupied with the World Cup.

Given this state of affairs, the trip of Rachel Frenkel, Bat-Galim Shaer and Iris Yifrach to Geneva on Tuesday was very important.

Not only does the world not care, the world (largely) is simply unaware of the kidnapping. For this exact reason, the head of U.N. Watch, Hillel Neuer, arranged for Frenkel to address the council, which, as usual, was hostile to Israel during Tuesday’s meeting and dealt mainly with Palestinian suffering while ignoring the other side. The council focused on the “oppression” of the Palestinians. How kind of them to give two minutes to talk about the kidnapping. Long live fairness.

“It was important for us to appeal to the world,” Iris Yifrach said. “This is the first time I left Israel, I do not even have a passport. We want our children home. We will do everything we must and will go to the end of the world if necessary to bring our children home.

“The world needs to know that a brutal and despicable act took place. Our children left school and did not come home.”

Shaer said, “We will not rest until the boys are brought back home. The world is indifferent. Hamas needs to know that abducting children does not pay off. World opinion is important, but its clear that Israel is the one who will free the boys,”

Frenkel’s speech intentionally unpolitical. “This is a humanitarian issue, children are children,” Frenkel said, requesting not to appeal just to representatives in the hall, but also to the hearts of parents all over the world.

“We hope that Rachel’s speech convinced the world that what happened was criminal,” Iris Yifrach and Bat-Galim Shaer said together. “That it is not humane to act like that. We are mothers, and this is the essence of human rights.”

Eviatar Manor, Israel’s envoy to the U.N. in Geneva, said, “The goal was to put the issue on the table, and I think we succeeded.”

Prior to Frenkel’s speech, the council focused its criticism on Israel. “Israel uses force against women and children, there is settler violence against Palestinians,” the Cuban representative said. The Brazilian representative did not condemn the kidnapping and called on Israel to stop settlement construction.

After speaking at the U.N. Human Rights Council, Frenkel joined more than 400 others in praying for the safe return of the boys at the Chabad house in Geneva. Frenkel said the kidnapping has united the people of Israel and everyone is awaiting for the boys to come home.

During the service, a shofar was blown and Geneva Chabad Rabbi Menachem Mendel Pevsner said, “For a moment, everyone forgot about their own pursuits and prayed from their hearts. We felt like we were not in Geneva, but rather next to the Western Wall in Jerusalem.”