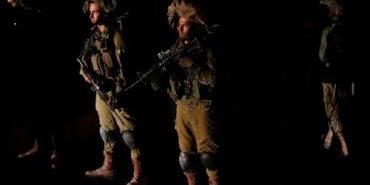 Gunfire and a blast were heard as Israeli troops searching Hebron for three Israeli teenagers abducted by terrorist surrounded a house on Sunday, witnesses said.

Witnesses also reported that IDF forces fired a rocket at the house.

Palestinian news agency Ma’an reported that three Palestinians were injured in the incident after the IDF bombed a house.

The IDF Spokesman’s office had no immediate comment on the incident.

The IDF expanded its operations on Sunday against Hamas in the Hebron region in attempts to locate Gilad Sha’ar, Eyal Yifrach, and Naftali Frankel, all three of whom disappeared from a hitchhiking point in Gush Etzion on Thursday night.

Hebron has been under closure since Saturday evening in what the source described as a “partial geographic isolation.”