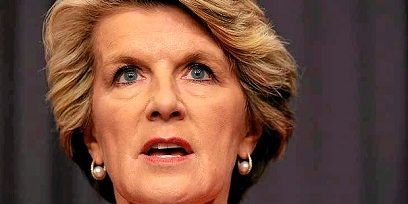 Everyone is wondering what has come over the leadership in the Land Down Under.

Me too, though unlike many observers I’m just thrilled.

The Australian government, under the Liberal Party leadership of Prime Minister Tony Abbott and his deputy, Foreign Minister Julie Bishop, has begun parting ways with the international community, taking a position at odds with every other country on earth on the purportedly most pressing, and for certain most unifying, issue of our day – the legitimacy or otherwise of Israel’s presence in ‘the West Bank’ and ‘east’ Jerusalem.

All the world’s in high dudgeon – especially the Arabs. That’s a good – and to the alert an important – thing.

But what exactly is all the fuss about?

Well, the newly elected government had been in office just two months when it “quietly registered Australia’s opposition to a United Nations resolution ordering an end to ‘all Israeli settlement activities in all of the occupied territories.’”

In case the world had missed that, Bishop then fired a startling shot across the bows of international consensus when she visited Israel two months later – during January of this year – and in an interview in The Times of Israel “suggested that, contrary to conventional diplomatic wisdom,” Jewish communities established in Judea and Samaria “may not be illegal under international law.”

She is right, of course, though the weight of international opinion formed over decades by the big lie* (see footnote at end of article) about the ‘occupied territories’ guaranteed a ribald response from many quarters.

But it was only this week, after Australian Attorney-General George Brandis bolstered Bishop’s statement when he downright refused to refer to so-called East Jerusalem as “Israeli occupied” – saying (again accurately) that to do so was unhelpful to the quest for Middle East peace – that the ‘Palestinian’ pigeons suddenly awoke to find the cat in among them.

And are they are in a flap!

“The description of East Jerusalem as ‘Occupied East Jerusalem’ is a term freighted with pejorative implications, which is neither appropriate nor useful,” Brandis said, according to The Sydney Morning Herald (June 6, 2014)

He emphasized that, “it should not and will not be the practice of the Australian government to describe areas of negotiations in such judgmental language.”

Which makes me want to break out in the popular Australian ‘war cry’ – “Aussie, Aussie, Aussie” which, if you are on board, would have you respond with “Oy! Oy! Oy!” In frantic if delayed reaction – realizing how dangerous the Australian hole in the dyke could be to the world’s fondness for its cause, the Palestine Liberation Organization (PLO, aka the Palestinian Authority or PA), hastily trundled out its biggest PR cannon – the one it specifically aims at the ‘Christian’ world.

The cannon calls herself a Christian, but PLO spokeswoman Hanan Ashrawi (like so many, many Christians) habitually takes a stand diametrically opposed to what the Bible says about Israel, and her hatred for the Jews knows apparently no bounds.

Her Muslim comrades let her loose when they want to unleash a particularly vicious verbal attack in erudite form.

But when Ashrawi sat down in front of the cameras, she was so beside herself that she nearly overplayed her hand: “It’s absolutely disgraceful and shocking that on the 47th anniversary of Israel’s military occupation of the West Bank and Gaza…Brandis is issuing such inflammatory and irresponsible statements,” she burned, as reported by The Times of Israel (June 6, 2014).

“Such pronouncements are not only in blatant violation of international law,” [wrong** see footnote] “and global consensus,” “but are also lethal in any pursuit of peace and toxic to any attempt at enacting a global rule of law.”

Her ironic choice of the words “lethal” and “toxic” didn’t surprise those acquainted with her.

This woman has always been serpent-like, spitting venom and coiling herself orally around any western politician who dares take a stand that is perceived detrimental to the nationalistic aspirations of her Palestinian Arab ‘people.’

Hearing her hate-filled heart, and the other complimentary condemnations by the Jordanian government’s spokesman who said Saturday that it, “rejects Australia’s decision to no longer recognize East Jerusalem as occupied territory,” one is to hope that the Abbott government counted the political cost before deciding to set out on this path. It would be better not to have taken this stand than to make a reversal under fire.

But at the end of the day – it’s not so much the Australian politicians we who love Israel should be concerned about, but Australia’s Christians.

We – Christian Zionists in other countries and here in Israel – should rally around Australia’s true Christians and pray for them. And we should urge and encourage them to in turn come out strongly in prayer and active support for their government, which won’t understand the spiritual ramifications of the stand it has taken.

Without God’s help, Abbott, Bishop and Brandis will, in truth, be unable to stand up to the terrible tsunami of vitriol, condemnation and threatening retribution that is being whipped up against their country. And the confronting truth is that it might well not stop at threats – the Islamic Arab world has well learned the efficacy of terrorism wielded against the innocent public in the democracies it spurns and sees as the Dar el-Harb, the House of War.

Australia, with courage, is placing herself squarely in the Islamic House of War. Now in the firing line, she needs bolstering from the non-Islamic world. There is one man across the other side of the globe who has taken spirited steps to stand with Israel and who can offer something tangible in the way of active support – Canada’s Stephen Harper, a bright stand-alone on a world stage crowded with anti-Israel bigots.

Were I to have Harper’s ear, I would urgently propose that Canada under his leadership forge an alliance with Australia under Abbott’s, and form a special “Treat Israel Fairly” (TIF) pro-Israel advocacy group of like-minded governments, inviting the membership of other nations whose leaders may have felt themselves too weak to swim alone against the global tide of anti-Israel fervour.

Riding the wave of its initiative, this group could swing quickly alongside – or pull into its orbit – other pro-Israel political groups and NGOs, to emerge on the world stage as a formidable force shoring up Israel, who is, in these days, prophetically stepping into the light of God’s favour – and buttressing those nations that make the hard choice to stand shoulder to shoulder with Israel against the barrage of lies leveled at her.

The Arab states have, for far too long, had wall-to-wall international support for their immoral and historically baseless cause. They are bullies. Confront them with a united Judeo-Christian front of nations and organizations and perhaps they will finally be demoralized to the point of turning tail and abandoning their dream of destroying the “Little Satan” – Israel, and going after the “Big Satan” – the USA.

On the ground, the range of measures a worldwide initiative like TIF could put its weight behind include: a global PR campaign to demystify the Big Lie of Israeli occupation; the active promotion of tourism to Israel; offsetting the BDS movement by incentivizing member nations and corporations to increase research and development investment in Israel, endorse academic partnerships with Israeli universities, offer business exchange programs and boost domestic import markets of Israeli products.

Israel is destined by God to become the head of the nations – a position she held back in the days of the first son of David, King Solomon. This is her glorious, Divinely assured future.

The Bible is clear – those nations that serve Israel will reap heavenly rewards; those that don’t will perish and be utterly done away with (Isaiah 60:12). In Genesis 12:3 stands the unshakeable foundational Biblical principle where God declares to Abraham concerning his seed: “I will bless those who bless you and I will curse him who curses you. And in you all the nations of the earth will be blessed.”

As Israel is raised to this ordained position, moving fully into her calling to be a light to the world, a fitting picture of her in the prophetic future would be as a lighthouse set on a high hill at the center of the earth, her beam finding and illuminating those nations that have risen out of the mire of global condemnation to take up their positions – as Australia is now doing – on smaller hills around her, to stand with her and receive her light.

“Arise, shine; for your light has come! And the glory of the LORD is risen upon you. For behold, the darkness shall cover the earth, and deep darkness the people; But the LORD will arise over you, and His glory will be seen upon you. The Gentiles shall come to your light, and kings to the brightness of your rising.” (Isaiah 60: 1-3)

* The ‘Big Lie’ says that Israel is occupying territory that belongs to the Palestinian Arabs.

It is a BIG lie because:

The territory in question is the land Israel took control of in the Six Day War of 1967.
• None of it has ever been the Palestinian Arabs’ territory. They have never owned it, controlled it, or had it (or any other land) as a national home. They were offered it in 1947 but refused the offer. It is not theirs. Individual Arabs own private property in the “West Bank” – but 98 percent of that land has always been state-owned and controlled – never by the Palestinians.

• Most of the territory Israel took control of in the 1967 war it has given away – Sinai to Egypt, and Gaza to the Palestinian Arabs. The lion’s share of the rest of that territory Israel is not occupying but administering. Israel only annexed two small pieces – the Golan Heights (which was the Jews’ for centuries in the past and which Syria controlled for a mere 21 years) and half the city of Jerusalem – that Jordan previously was illegally occupying according to international law.

** Wrong, because there is no binding international legal ruling agreed to by the rest of the world that Israel is in violation of. Individual countries (like the increasingly anti-Semitic UK.) International and regional organs top-heavy with knee-jerk anti-Israel members (the UN, the EU, the ICRC, the Non-Aligned Movement, The Organisation of Islamic Cooperation), NGOs with unbroken track records of anti-Israel animus (Amnesty International, Human Rights Watch, B’tselem), they all stand in the prosecution’s corner and regularly cry: “Guilty!” But to quote the good citizen falsely accused of criminal activity: “If you’ve got a case, try me.” Israel is not being charged – just accused and condemned by popular – freighted – opinion. International jurists of the highest standing (Eugene Rostow and Julius Stone) have presented solid – historically verifiable – arguments clearing Israel of any such violations or crimes.

US prepared to recognize Israeli annexation of Judea and Samaria
April 28, 2020