More members of US congress set to visit Judea and Samaria 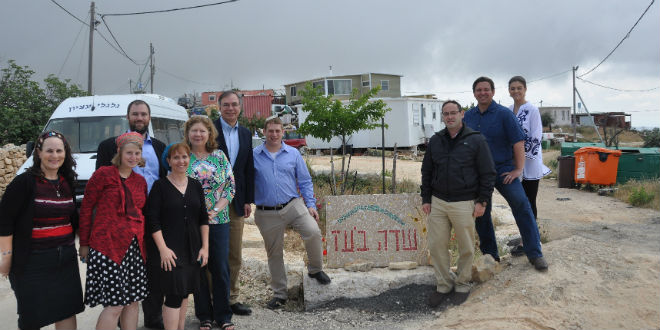 Since last summer, 16 US Congressmen have toured through Judea and Samaria including two recent visitors, Andy Harris (R-Maryland) and Ron DeSantis (R-Florida), who toured the region with the Yesha Council on a Yes! Israel Mission last week. The two members of the US House of Representatives and their wives visited Gush Etzion, Efrat, Hebron, the South Hebron Hills, Jordan Valley, Ariel, Samaria, and the Binyamin Regional Council from May 12 – 15.

Harris told Tazpit News Agency that the tour of Judea and Samaria was eye-opening. “We met with Israeli residents who just want to live their lives, to coexist with their neighbors,” Harris sad. “They want to leave politics out of it. It was impressive to see how these communities actually function and how well they get along with their surroundings.”

“Hundreds of thousands of people live in peace in this region, and only the few that are in conflict get mainstream media coverage,” Harris told Tazpit.

“We came here to learn – you can’t have 465 Congressmen visiting the region at the same time,” joked Harris. “We will bring back the message to Congress: you have to look beyond headlines to understand what’s going on and consider the cultural and historical context of what’s happening.”

Harris, who served as a physician at John Hopkins Hospital and a Naval Reserve medical officer, visited Israel last August and said that he didn’t have the opportunity to visit Judea and Samaria on the previous visit. “It was a pleasure to visit those areas this time around.”

DeSantis added that pushing Israel to 1967 borders was unacceptable. “When you stand on the skyscraper in Tel Aviv and you see just how close everything is, it makes the reality that much more clear. America is separated by large oceans from those who want to harm its citizens – Israel’s are hilltops away,” said DeSantis, a Harvard law graduate who was active duty serviceman and served in Iraq as an adviser to a US Navy SEAL commander.

The pre-1967 borders entailed a mere nine-mile wide waistline across Israel’s coastal strip and a security border of 223 miles, an area that is considered virtually impossible to defend in an advent of war and rocket fire.

According to Dani Dayan, Chief Foreign Envoy of the Yesha Council, such visits are critical to understanding the region.

“The Members of Congress were able to see the reality in Judea and Samaria without the distorting effect of biased intermediaries like the international media and anti-Israeli propaganda. What they saw was for them a life changing experience,” Dayan told Tazpit News Agency.

Dayan, a businessman who immigrated to Israel from Argentina in 1971, was formerly the Chairman of the Yesha Council for six years.

“The dozens of members of Congress that visited Judea and Samaria during the last couple of years will doubtlessly change the discourse on the Hill about the Jewish communities on the area,” said Dayan.