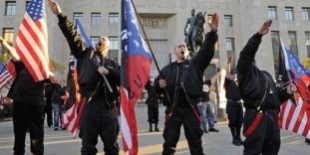 IT WASN’T that long ago that Jews in America felt more comfortable and secure than ever before. Jew hatred finally seemed to be a thing of the past. Polls conducted by the Anti-Defamation League showed a marked decline in the number of Americans holding anti-Semitic views, from 29 percent of the population in 1964 to 12 percent in 1998.

Some Jewish leaders even predicted at the time that Jewish defense organizations such as the ADL had served their purpose and would soon go out of business.

They were wrong. Not only has there been an uptick in anti-Jewish attitudes among Americans over the past 15 years, but even more disturbing, anti-Semitism has been gradually creeping out of the shadows into the mainstream.

The tragic murder of three (ironically, non-Jewish) people at two Jewish facilities in Kansas City in mid-April served as a stark reminder that anti-Semitism is alive and well on the far fringes of American society. As if that weren’t cause enough for alarm, Daniel Clevenger, the recently elected mayor of the suspected killer’s hometown of Marionville, Missouri, acknowledged that he “kind of agreed” with the killer’s white supremacist views.

Clevenger’s views were made public during the mayoral election campaign, when it emerged that he had written a letter to a local newspaper a decade ago denouncing the “Jew-run medical industry” and “Jew-run government-backed banking industry.” Although he has since resigned, one has to wonder how he could have been elected in the first place.

And lest you think that Jewish conspiracy theories germinate only in small-town America, think again. Hardly a month goes by without at least one media interview with John Mearsheimer or Stephen Walt, professors at the University of Chicago and Harvard’s Kennedy School of Government, whose 2007 best-selling polemic “The Israel Lobby” claimed that the “lobby” manipulated and threatened successive US governments into blind and unwholesome support for Israel to the detriment of American national interests.

might not follow their claims all the way to anti-Semitism. But this is how it always begins.”

Indeed it does. It took only a few years for Mearsheimer to go from merely bashing Israel to actively endorsing the book, “The Wandering Who?” written by Gilad Atzmon, an obscene anti-Semite.

Atzmon, a UK-based ex-Israeli jazz musician, traffics in Holocaust denial and classic anti-Jewish canards, including the belief that Jews in medieval times may have used the blood of Christian children to make matza. Yet, incredibly, Mearsheimer called “The Wandering Who?” a “fascinating” book that “should be widely read by Jews and non-Jews alike.”

Granted, a distinguished professor endorsing a blatantly anti- Semitic worldview is rather exceptional. The same can’t be said for the occurrence of anti-Jewish harassment and intimidation on several college campuses. Pro-Israel Jewish students at Rutgers, NYU, Michigan, Cal Berkeley and other prestigious schools have been verbally taunted, confronted with overt anti-Semitic imagery under the guise of pro-Palestinian activism, and forcibly removed from anti-Israel events which they were simply attending as peaceful observers.

Sadly, in too many instances, university administrators have failed to take action against such intolerance, in effect ignoring entreaties from Jewish students for support.

While the anti-Semitism on the campuses is crude and overt, in the liberal churches it’s more insidious. The Jerusalem-based Palestinian Christian group Sabeel, which is embraced by a sizable segment of the American mainline Protestant community, professes to support peace but, in fact, is a driving force behind the Boycott, Divestment and Sanctions (BDS) movement that seeks to delegitimize the Jewish state.

Sabeel gatherings, often hosted by a local church and couched in innocuous-sounding titles such as “”Seeds of Justice and Hope for Palestinians and Israelis” typically provide a platform for anti-Israel extremists and Jewish self-haters, who disparage Judaism and Zionism using theologically loaded language. Sabeel missions to the West Bank have brought thousands of Christians to “witness” the alleged oppression of Palestinians by the “Israeli crucifixion machine.”

Thus, anti-Semitic views, once reserved for the racist fringes of politics, academia, and the church, have moved closer to the mainstream.

We cannot afford to be complacent. The purveyors of Jew hatred – or, for that matter, any hatred – must be called out and responded to as strongly as possible. We must work to ensure that their reprehensible messages never become acceptable to people of conscience.  Robert Horenstein is Community Relations Director of the Jewish Federation of Greater Portland, Oregon.

Red Alert: Not just the rise, but the acceptance of antisemitism—what can we do about it?
May 18, 2022
Glory or weakness?
March 22, 2022
Germany loosens asylum requirements for Ukrainian Jews amid ongoing war with Russia
March 10, 2022
Iranian media slanders Zelensky with antisemitic article
March 10, 2022
Gaslighting Anti-Semitism in America
January 24, 2022
Red Alert: Colleyville Texas: Why Is it Our Problem?
January 19, 2022