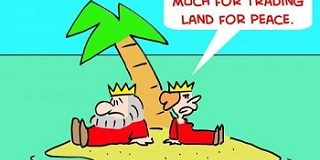 There was a ghoulish creepiness to US Secretary of State John Kerry’s visit to Israel last week. Here we were, beset by the greatest winter storm in a hundred years. All roads to Jerusalem were sealed off. Tens of thousands of Jerusalemites and residents of surrounding areas were locked down in their houses, without power, heat, telephone service or water.

And all of the sudden, out of nowhere, Kerry appeared. As Hamas-ruled Gazans begged the supposedly hated IDF to come and save them from the floods, and as Israel took over rescue operations for stranded Palestinians living under the rule of the PLO ‘s gangster kleptocracy in Judea and Samaria, here was Kerry, telling us that we’d better accept the deal he plans to present us next month, or face the wrath of the US and Europe, and suffer another Palestinian terror war.

What is going on? Why can’t Kerry leave Prime Minister Binyamin Netanyahu and the rest of the country alone, even for a week, in the middle of a blizzard of biblical proportions? According to leaks from the now five month old negotiations, after 20 rounds of talks, the Palestinians have not budged from the positions they have held to for the past 50 years. They do not accept Israel’s right to exist. They do not recognize the existence of the Jewish people. They do not believe that the Jews have the right to freedom or self-determination. They insist on taking control of our 3,000 year old capital. They demand that we surrender our ability to defend ourselves from foreign aggression and Palestinian attacks and infiltration from the east.

This was the case when PLO chief Mahmoud Abbas rejected then prime minister Ehud Olmert’s offer of peace in 2008.

Facing the Palestinians’ continued defiance of the very notion of peaceful coexistence with Israel, Kerry is planning to present his own peace deal next month and try to force Israel to accept it. Although the text of Kerry’s deal has not yet been revealed, we know exactly what it will involve just by listening to what he has already told us.

In his speech at the Saban Forum on December 7, Kerry said, “For many years the broad contours of an eventual solution have been absolutely clear, and they were crystallized for the world in December of 2000 when president Clinton laid down the parameters for a final-status agreement. They were reaffirmed through the Annapolis process during the Bush administration.”

The Clinton parameters involved a near complete American embrace of the PLO ‘s maximalist demands. The Annapolis guidelines went even further in the PLO ‘s direction.

And now, Kerry intends to put forth his own parameters that will be even more forthcoming to the PLO than either the Clinton or Bush administrations were.

Like the Clinton and Bush plans, the Kerry parameters will involve Israeli surrender of Jerusalem and the Temple Mount to the PLO , which rejects the historical fact that two Jewish temples were built at the site that was and remains the cradle of Jewish civilization and history and holiest site to Judaism.

They will involve the mass expulsion of hundreds of thousands of Jews from their homes in Jerusalem, Judea and Samaria to make room for an anti-Semitic, Jew-free state that maintains its devotion to the destruction of the rump Jewish state.

Kerry’s framework deal will involve the mass immigration of hundreds of thousands of foreign-born Arabs, who have been living in al-Qaida-, Hamas- and PLO -controlled UN-run “refugee camps,” for the past four generations.

Kerry’s plan will require Israeli society to destroy its cohesion through the dismemberment and destruction of hundreds of Jewish communities. As occurred before the Gaza withdrawal, it will require the government to oversee the demonization and criminalization of well over three million law abiding, patriotic Israeli citizens who oppose the mass expulsions.

Kerry’s parameters will require Israel to surrender its ability to defend itself against foreign aggression and Palestinian attacks. As for the Palestinians, implementation of the Kerry parameters will guarantee that all moderate elements in their society, including among Israeli Arabs, will be overwhelmed and destroyed. The PLO state in Judea, Samaria and Jerusalem, like the Hamas state in Gaza, will be breeding grounds for global jihadists. They will actively incite, organize and oversee an armed insurrection of the Arabs of the Galilee and the Negev, meting out punishment for all dissenters.

As for the US forces that Kerry proposes deploying to the Jew-free PLO state, they will be targeted by the Palestinians, just as the Palestinians and the Syrians attacked US Marines in Beirut 30 years ago. And like the Marines in Beirut, they will be withdrawn in humiliation and defeat, but the lesson – that the Arabs perceive the Americans and Jews as enemies of equal weight – will not be learned. And, at any rate, unable to defend itself after agreeing to Kerry’s parameters, Israel will cease to be a strategic ally and be transformed into a strategic basket case. Its destruction will interest Kerry and his supporters just as much as the destruction of South Vietnam interested them in 1975.

Aside from being a more anti-Israel version of the Clinton parameters and Bush’s framework, Kerry’s parameters, and framework deal, have one other unique and particularly dangerous feature. Until now, US peace plans followed former prime minister Ehud Barak’s dictum that “nothing is agreed to until everything is agreed to.”

That is, no hypothetical Israeli concession on Jerusalem, for instance, will be binding unless a final deal is concluded.

Kerry indicated at the Saban Forum that his goal is to coerce Israel into making irrevocable concessions up front, before the Palestinians agree to peaceful coexistence.

As he put it, “A basic framework will have to address all the core issues – borders, security, refugees, Jerusalem, mutual recognition, and an end of claims. And it will have to establish agreed guidelines for subsequent negotiations that will fill out the details in a full-on peace treaty.”

For the past five and a half years, Netanyahu’s strategy for dealing with US President Barack Obama has been to try to survive him. He’s withstood Obama’s constant demand for Israeli national suicide for “peace” by giving the bare minimum of revocable concession possible to keep Obama at bay.

But with Kerry poised to shove his lethal parameters down our throats, parameters that will require Israel to irrevocably accept terms of peace that will destroy the country, it is obvious that Netanyahu needs to adopt a longer-term strategy. Our goal cannot be limited to waiting out Obama. Our goal must be to extricate Israel from the two-state trap.

Yes, Israel will pay a huge price for jumping ship. For 20 years, non-leftist Israeli leaders have been trying to go along to get along with the Left, and the Americans and their ever-escalating demands. But Kerry’s obsessive harping, and his insistence on pushing forward with his disastrous framework deal forces our hand.

Either we pay a huge price now, or accept our destruction within 5 to 15 years.