Chanukah Guide for the Perplexed, 2013 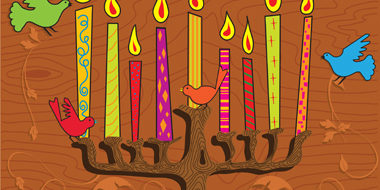 1.  For the first time – and never again – the first day of Chanukah will be celebrated on Thanksgiving, the fourth Thursday in November, November 28, 2013.  Since the Jewish calendar is based on a 19 year cycle (when a “leap month” is added – seven times – to the shorter Jewish year) and Thanksgiving is part of a 7 year cycle, they coincide every 133 years.  However, Thanksgiving was formally adopted by President Lincoln in 1863, and therefore it could not coincide with Chanukah 133 years ago, in 1861. Moreover, due to the moving gap between the Jewish lunar calendar (with 29-30 day months) and the general Gregorian solar calendar, they will not coincide before the year 79,811….

2.  David Ben Gurion, the first Prime Minister of the Jewish State, stated: “The struggle of the Maccabees was one of the most dramatic clashes of civilizations in human history, not merely a political-military struggle against foreign oppression…. The meager Jewish people did not assimilate, as did many peoples.  The Jewish people prevailed, won, sustained and enhanced their independence and unique civilization…. The Hasmoneans overcame one of the most magnificent spiritual, political and military challenges in Jewish history due to the spirit of the people, rather than the failed spirit of the establishment ….” (Uniqueness and Destiny, pp 20-22, Ben Gurion, IDF Publishing, 1953).

3. Chanukah is the only Jewish holiday that commemorates a Land of Israel national liberation struggle, unlike Passover (the Exodus from Egypt), Sukkot/Tabernacles and Shavuot/Pentecost (on the way from Egypt to the Land of Israel) and Purim (deliverance of Jews in the Persian Empire). Chanukah is the longest Jewish holiday (8 days) with the most intense element of light (8 consecutive nights of lighting candles).

5. Shimon the Maccabee – who succeeded his brothers, Judah and Yonatan -defied an ultimatum by the Syrian emperor, Antiochus (Book of Maccabees A, Chapter 15, verse 33), who demanded an end to the “occupation” of Jerusalem, Jaffa, Gaza, Gezer and Akron, Shimon declared: “We have not occupied a foreign land; we have not ruled a foreign land; we have liberated the land of our forefathers from foreign occupation.”

6.  The name Maccabee (מכבי or מקבי) is a derivative of the Hebrew word Makevet (מקבת), Power Hammer, which described Judah’s tenacious and decisive fighting capabilities. Or, it could be a derivative of the Hebrew verb Cabeh (כבה), to extinguish, which described the fate of Judah’s adversaries. Another source of the name suggests that Maccabee,מכבי, is the Hebrew acronym of “Who could resemble you among Gods, Jehovah” (מי כמוך באלים יי). However, the saga of the Maccabees was written, during ancient times, in Latin, which sometimes pronounces C like a TZ.  Hence, Maccabee could be the Latin spelling of the Hebrew word Matzbee, the commander.

7.  Chanukah’s historical context is narrated in the Books of the Maccabees and the Scroll of Antiochus. Alexander The Great – who held Judaism in high esteem and whose Egyptian heir, Ptolemy II, translated the Torah to Greek – died in 323 BCE following 12 glorious years. Consequently, the Greek Empire disintegrated into five provinces, and thirty years later into three kingdoms: Macedonia, Syria and Egypt. The Land of Israel was militarily contested by Syria and Egypt. In 198 BCE, Israel was conquered by the Syrian Antiochus III, who considered the Jewish State as an ally. In 175 BCE, a new king assumed power in Syria, Antiochus (IV) Epiphanies, who wished to replace Judaism with Hellenic values and assumed that Jews were allies of Egypt. In 169 BC, upon his return to Syria from a war againstEgypt, he devastated Jerusalem, massacred the Jews, forbade the practice of Judaism (including the Sabbath, circumcision,etc.) and desecrated Jerusalem and the Temple. The 167 BCE-launched rebellion against the Syrian (Seleucid) kingdom featured the Hasmonean (Maccabee) family: Mattityahu, a priest from the town of Modi’in, and his five sons,Yochanan, Judah, Shimon, Yonatan and Elazar. The heroic (and tactically creative) battles conducted by the Maccabees,were consistent with the reputation of Jews as superb warriors, who were frequently hired as mercenaries by Egypt,Syria, Rome and other global and regional powers.

9.  Chanukah (חנוכה in Hebrew) is education (חינוכ)-oriented. According to the first book of Maccabees, Judah instituted an eight day holiday on the 25th day of the Jewish month of Kislev 165 BCE, in order to commemorate Jewish history, in general, and the inauguration (Chanukah, חנוכה, in Hebrew) and deliverance of the holy altar and the Temple, in particular.  A key feature of Chanukah is the education/mentoring of family members.  The Hebrew word, Chanukah, consists of two words, Chanu חנו in Hebrew (they rested/stationed) and Kah כה in Hebrew (which is equal to 25), referring to the Maccabees’ re-consecration of the Temple on the 25th day of the month of Kislev. Some have suggested that the timing of Christmas (December 25th) and the celebration of the New Year, 8 days later (January 1), have their origin in Chanukah, which always occurs in December.

10.  Chanukah is the holiday of liberty, which is advanced by combining The Book (spiritual) and the sword (physical), light, thecommemoration of history/roots, optimism, dedication to values, faith in God, heroism on the battlefield and principle/morality-driven leadership. Chanukah celebrates the liberation of Jerusalem. The first day of Chanukah is celebrated when daylight is balanced with darkness, ushering in optimism for brighter future. Chanukah is celebrated in Kislev (כסלו), the Jewish month of miracles (e.g., Noah’s Rainbow appeared in Kislev) and the month of security/safety (the Hebrew word Kesel –כסל– means security). The first and last Hebrew letters of Kislev (כו – כסלו) equal 26 (in Jewish Gimatriya) – the total numerical value of the Hebrew spelling of Jehovah – יהוה. Moses completed the construction of the Holy Ark on the 25th day of Kislev, and it was also the date of the laying the foundation of the Second Temple by Nehemiah. The 25th (Hebrew) word in Genesis is Light (OR, אור), which is a Jewish metaphor for the Torah. The word which precedes “light” is יהי (“let there be” in Hebrew) – 25 inGimatriya. The 25th stop during the Exodus was Hashmona (same root as Hasmonean in Hebrew). Chanukahcommemorates one of the early Clashes of Civilizations: the victory of light (Maccabees) over darkness, the few overthe many (miniscule light can penetrate darkness), liberty over slavery and remembrance over forgetfulness. The Hebrewspelling of darkness – חשכה – employs the same letters as forgetfulness – שכחה.

11.  The eight candles of Chanukah are lit one more per day, dedicated to the Torah, heroism, deliverance, leadership, camaraderie, roots, ingathering, family/community. The ninth candle (the Shamash, שמש, spelled in Hebrew like the word sun( which is lit every day to light the rest, is dedicated to Divine Providence and its miracles.
The candles should be lit outside the home, or at the window, in order to share the message of Chanukah with the world at-large.

12. The thirty-six Chanukah candles (excluding the ninth “divine” candle) represent the 36 hidden righteous people, whose virtue safeguards human-kind. There were 36 hours of divine light welcoming Adam during the creation, lasting until the end of the first Sabbath. Various forms of light – and candles – are mentioned 36 times in the Torah. There are 36 parts in the Talmud. Chanukah is celebrated during the Hebrew month of Kislev (כסלו), whose spelling consists of two Hebrew words: Throne (כס) and 36 (לו).

13.   The eight days of Chanukah, and the eight branches of the Chanukah Menorah (the ancient Temple Menorah consisted of seven branches, which commemorated the seven days of creation) represent divine capabilities and optimism. The shape of the digit 8 represents infinity: there is no end to divine capabilities as evidenced by the survival of the Jewish People against all odds. The root of the Hebrew word for 8 (Shmoneh, שמונה) is “oil” (Shemen, שמנ), which is also the root of “Hasmonean” (Hashmonayim, חשמונאים). The Aramaic name of the month of Kislev is Kislimo, “heavy.” The Hebrew spelling of “heavy” is identical to the spelling of “oil” – שמן.

14.  The US connection:
*The sculpture of Judah the Maccabee’s head is displayed at the West Point Military Academy, along with the sculptures of Joshua, David, Alexander the Great, Hector, Julius Caesar, King Arthur, Charlemagne and Godfrey of Bouillon – “the Nine Worthies.”

*“In God We Trust” is similar to the Maccabees’ battle cry, which adopted Moses’ battle cry against the builders of the Golden Calf: “Whoever trusts God; join me!”

*Patrick Henry’s “Give me liberty or give me death,” and New Hampshire’s “Live Free or Die,” followed the liberty and sacrifice-driven legacy of the Maccabees: swimming against the stream gets one closer to the source!

*“Rebellion against Tyrants is obedience to God” was proposed by John Adams, Thomas Jefferson and Benjamin Franklin to be on the US Seal, reflecting the legacy of the Maccabees: A tiny minority of “rebels” – condemned by the “loyalists” – rising against an oppressive super-power. They demonstrated the victory of the few over the many, right over wrong, moral over immoral, truth over lies, faith over cynicism and opportunism.  Paul Revere’s nickname was the “modern day Maccabee.”

15. “Chanukah has a special significance in Montana these days. In Billings in 1993, vandals broke windows in homes that were displaying menorahs. In a response organized by local church leaders, more than 10,000 of the city’s residents and shopkeepers put make-shift menorahs in their own windows, to protect the city’s three dozen or so Jewish families. The vandalism stopped.” (New York Times, Dec. 4, 2009, Eric Stern, senior counselor to Gov. Brian Schweitzer).

Category: Feasts and festivalsBy The Jerusalem ConnectionNovember 27, 2013Leave a comment