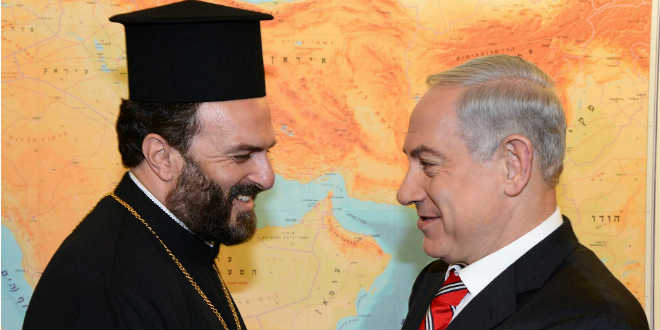 At a recent conference in Jerusalem, leading Israeli Christians gathered to set themselves apart from their Muslim counterparts and declare their affinity for the Jewish state in which they reside.  At the conference, entitled “Israeli Christians: Breaking Free? The advent of an independent Christian voice in Israel,” representatives of the community reiterated one by one, “We are not Arabs, we are Christians who speak Arabic.”

Father Gabriel Naddaf of Nazareth, spiritual leader of the Israeli Christian Recruitment Forum, spoke first.  ”I am here to open the public’s eyes,” he said. “If we want to refrain from lying to our own souls and to the general public, we must say clearly and unwaveringly: enough!

“The Christian public wants to integrate into Israeli society, against the wishes of its old leadership. There are those who keep pushing us to the margins, keeping us the victims nationalism that is not our own, and of a conflict that has nothing to do with us,” Israel Hayom reported.

Naddaf also quoted the founder of the  Israeli Christian Recruitment Forum, Maj. Ihab Shlayan, as saying: “The Christians will not be made into hostages, or allow themselves to be controlled by those who wish to impose their nationality, religion and way of life upon us. We will not agree to hide behind the groups that control the streets. We want to live in Israel — brothers in arms and brothers in peace. We want to stand guard and serve as the first line of defense in this Holy Land, the Land of Israel.”

“It is unthinkable that our children will be raised on the history of the Nakba and on the hatred of Jews, and not be taught their history,” Naddaf said.

Capt. Bishara Shlayan, founder of the Christian Israeli Party, echoed his sentiments.  ”We were raised on Arab political parties,” he said, “the communists, and then the National Democratic Assembly. In time, I realized where these Arab parties were taking us — only against Israel.

“We need to create a different culture,” he continued. “We need to hand out Israeli flags to every child. Education begins here. You enter a school in Nazareth, and you will not see a single Israeli flag. They don’t recognize it. You will only see Palestinian flags.”

Lt. (ret.) Shaadi Khalloul, the spokesman of the Israeli Christian Recruitment Forum and an officer in the Israel Defense Forces Paratroopers Brigade, also spoke.  ”The typical Christian student thinks that he belongs to the Arab people and the Islamic nation, instead of speaking to the people with whom he truly shares his roots — the Jewish people, whose origins are in the Land of Israel.”  Over the past three years, Khalloul has fought to have his community recognized by the Interior Ministry as Aramaic Christians, a name that would strengthen their ties to the Jewish community.  Prior to the Arab invasion, Aramaic was the common language spoken in Israel, by Jews and Christians alike.  He calls his group “Bnei Keyama”, meaning allies in Aramaic.  He says he has nothing against Arabs, but does not share their identity.  He claims it is problematic that he is associated with the Arab community, because it pulls him into a conflict that is not his own.

“The typical Christian student thinks that he belongs to the Arab people and the Islamic nation, instead of speaking to the people with whom he truly shares his roots — the Jewish people, whose origins are in the Land of Israel,” Khalloul said.

The conference was a joint effort of the Liaison Committee of B’nai B’rith World Center in Jerusalem and the Ecumenical Theological Research Fraternity in Israel.