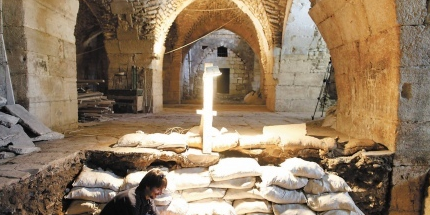 A portion of a large hospital dating back to the Crusader period (1099-1291 C.E.) has been uncovered in Jerusalem’s Old City. The building, known from historical documents, collapsed during an earthquake in 1457 and was buried beneath rubble.

The structure was discovered during excavation work conducted by the Israel Antiquities Authority, in cooperation with the Grand Bazaar Company of East Jerusalem. The dig was prompted by Grand Bizaar’s decision to build a restaurant at the site.

The building is located in the heart of the Christian Quarter near David Street, and is owned by the Muslim Waqf. Until about a decade ago, the building was used as a fruit and vegetable market, but has since stood empty.

Given Grand Bazaar’s plans to open a restaurant at the site, the antiquities authority initiated an archaeological check. The complex, only a small portion of which has been dug up so far, is thought to cover an area of 15 dunams (3.7 acres). The ceilings within the former hospital are six meters (almost 20 feet) high.

Renne Forestany and Amit Re’em led the dig for the antiquities authority. They said historical documents referred to a “sophisticated hospital … as large and as organized as a modern hospital. The hospital was established and constructed by a Christian military order named the Order of Saint John of the Hospital in Jerusalem and known by its Latin name, the Hospitallers.

“These righteous warriors took an oath to care for and watch over pilgrims, and when necessary they joined the ranks of the fighters as an elite unit.”