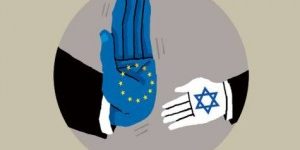 This week the EU took three steps that together prove Europe’s ill-intentions towards the Jewish state.

The areas beyond the 1949 armistice lines delineated by the EU directive include the Gaza Strip, which Israel abandoned eight years ago; the Golan Heights, which has been under Israeli sovereignty since 1981; eastern, northern, and southern Jerusalem, which have been under Israeli sovereignty since 1967; and Judea and Samaria, over which Israel has shared governance with the PLO since 1994 in accordance with signed agreements witnessed by EU representatives.

The EU’s second action was the publication Tuesday of EU foreign policy commissioner Catherine Ashton’s letter to her fellow commissioners informing them that by the end of the year, the EU will publish binding requirements for specially labeling Israeli goods produced by Jews beyond the 1949 armistice lines exported to EU member states.

This act is potentially more damaging for Israel than the ban on transferring EU monies to Israeli entities with “bad” addresses. Labeling Israeli products is a means of signaling European consumers that they should view all Israeli exports as morally inferior to other goods and wage a consumer boycott of Israeli products. Indeed, Lithuanian Foreign Minister Linas Linkevicius described the proposed labeling as an alternative to a broader boycott of all Israeli goods.

The EU’s third act was its decision to define Hezbollah’s “military wing” as a terrorist organization, but leave all the other Hezbollah-related institutions untouched. While the move has been applauded by Israeli politicians desperate to deny Europe’s animosity, Europe’s partial designation of Hezbollah as a terrorist entity is another act of aggression against Israel.

By pretending that Hezbollah as a legitimate “political wing” — a transparent lie that even Hezbollah has denied — the EU ensures that Hezbollah personnel and Hezbollah institutions can continue to find safe haven in Europe so long as to avoid attacking non-Jewish Europeans. Hezbollah agents can continue raising money, planning attacks, and recruiting terrorists in Europe, as long as Hezbollah labels the activities “political.” In other words, all Hezbollah operations directed against Israel and Jews will remain lawful in Europe.

Beyond exposing the EU’s fundamental and obsessive hostility towards the Jewish state, these three actions put  the EU’s protestations of allegiance to international law and commitment to bringing about peace between the Palestinians and Israel.

As Ambassador Alan Baker, the former legal advisor to the Foreign Ministry, wrote in an article published by the Jerusalem Center for Public Affairs, the EU’s actions against Israeli entities that operate beyond the 1949 armistice lines are unsupported by international law. The EU claims that Israel’s presence beyond the 1949 armistice lines is unlawful is not supported by any treaties or customs. Indeed, it is explicitly refuted by treaties and customs.

Israel’s legal rights to sovereignty over Judea, Samaria and Jerusalem are recognized under the law of nations through the 1922 League of Nations Mandate for Palestine, which also called for “close Jewish settlement” of these areas. The Mandate’s allocation of sovereign rights over all of these areas to the Jewish people, and its recognition of the Jews as the indigenous people of the areas, has not been abrogated by any subsequent treaty. To the contrary, they were reinforced by Article 80 of the UN Charter.

Moreover, as Baker noted, the EU wrongly claims that Jewish communities beyond the 1949 armistice lines are illegal under Article 49 of the Fourth Geneva Convention from 1949. But authoritative interpretations of Article 49 make clear that Article 49 does not apply to such communities.

The lines the EU points to as Israel’s legal border were never borders and never legal. The 1949 armistice lines, which the EU falsely refers to as the 1967 borders, represent nothing more than the lines at which Israeli forces halted the invading armies of Arab states who illegally assaulted the nascent Jewish state at its birth on May 15, 1948. The armistice agreements explicitly stated the armistice lines lack all legal significance in terms of claims of parties to lands beyond the lines.

Finally, as Baker noted, the EU itself repeatedly supported UN resolutions and international agreements that recognize the legality of Israel’s continued control and civilian presence in the areas. As a consequence, its own actions contradict its claim that Israel’s presence and the presence of Israeli civilian communities beyond the 1949 armistice lines are illegal.

By allowing Hezbollah to continue to operate in the EU, the EU is in violation of binding UN Security Council Resolution 1373 from 2001 that prohibits the use of member states’ territory for the benefit of terrorist groups.

Justice Minister Tzipi Livni called the EU’s imposition of economic sanctions a “resounding wake-up call,” adding, “I hope that now all those who thought it is possible to continue with the freeze will understand that we have to act to open negotiations, because this is the only way to protect Israel’s general interests.”

This view, which is the official view of the Left, is based on a complete denial of reality.

The EU announced its sanctions on the very same day US Secretary of State John Kerry announced he had convinced the PLO to return to peace talks with Israel. The confluence of these events could not demonstrate more clearly that the EU’s diplomatic onslaught against Israel has nothing to do with the conduct of negotiations with the PLO. If the EU’s chief interest was bringing Israel and the PLO to the negotiating table, Brussels would be sanctioning the Palestinians who have refused to negotiate with Israel since 2008.

By levying sanctions the EU does not seek to advance the cause of peace. It hopes to coerce Israel into abandoning its legitimate historic claims as the indigenous people of the land of Israel to the lands allocated to the Jewish people under international law by the 1922 League of Nations Mandate for Palestine. It hopes to coerce Israel into surrendering its right to defensible borders and voluntarily transform itself into an indefensible strategic basket case wholly dependent on the goodwill of outside powers for is survival.

The question is what can Israel do about it?

Were Israel to fight fire with fire and levy counter sanctions on European goods it would be entering an economic war that it would lose and therefore has every interest in avoiding. But Israel’s inability to respond in kind to European aggression does not mean it is without options.

The EU itself told Israel how to go about doing this in Paragraph 15 of the sanctions directive.. It reads, “The requirements do not apply to activities which, although carried out in the territories . . . aim at benefiting protected persons under the terms of international humanitarian law who live in these territories and/or at promoting the Middle East peace process in line with EU policy.”

In other words, Israeli NGOs that receive EU assistance are exempt from the financing ban if they commit to undermining Israel’s rights in the area. As the EU sees it, NGOs who receive EU money are EU agents, advancing European goals in the domestic Israeli arena, and as such should be exempted from the EU’s economic sanctions.

In a 2010 meeting with US diplomats leaked by Wikileaks, Jessica Montell, the Executive Director of the Israeli registered pro-Palestinian pressure group B’Tselem effectively admitted that her organization would cease to exist without European funding. According to the protocol of the meeting, Montell, “estimated her 9 million NIS ($2.4 million) budget is 95 percent funded from abroad, mostly from European countries.”

To stem the momentum of Europe’s new economic war, Israel’s first response to the EU’s sanctions must be a swift passage in the Knesset of a law requiring all Israeli entities who agree to operate under the EU’s funding guidelines to register as foreign agents and report all EU contributions. Those contributions should be taxed at the highest corporate tax rate.

EU officials have stated repeatedly that they seek to undermine Israeli control over Area C. Area C is the area of Judea and Samaria, where in accordance with agreements signed between the PLO and Israel, Israel exercises most civil and military authorities. The EU is funding projects in Area C whose stated goal is to make it impossible over time for Israel to assert its authority over the area.

Israel’s second response to the EU’s announcement of economic sanctions on Israeli economic activity in Judea and Samaria should be to suspend all EU projects in Area C. Future EU projects should be subject to intense scrutiny by the Civil Administration. Israel’s default position should be to reject, rather than approve such requests, given their hostile intent.

Finally, EU peacekeeping forces from Gaza to Lebanon to Syria have repeatedly proven not only their cowardice, but their willingness to act in ways that endanger Israel in order to protect themselves. In Gaza, EU border guards fled to Israel following Hamas’s takeover of the area in 2007.

Along the border with Syria Austrian peacekeepers fled at the first sign of trouble leaving Israel to deal with Syrian breaches of the European-sanctioned 1974 disengagement agreement by itself.

European forces in UNIFIL in Lebanon have signed protection agreements with Hezbollah where in exchange for European forces’ turning a blind eye to Hezbollah’s illegal use of civilian infrastructures as military installations, Hezbollah has promised not to murder European forces.

Given this track record, Israel should bar European forces from further participation in armed forces in Israel. To this end, Israel should allow the mandate of the European-dominated Temporary International Presence in Hebron to expire when it next comes up for review. The TIPH, which has been deployed to the city since 1994, is comprised of forces from Denmark, Italy, Norway, Sweden, Switzerland and Turkey.

Israel has for years been operating under the misguided belief that the EU would eventually come around and side with Israel against its enemies. This belief has been informed by equal doses of innocence and wishful thinking. The EU’s decision to initiate an economic war against the Jewish state forces Israel to abandon its long-held illusions. Israel has options for responding forcefully to Europe’s aggression. If judiciously and firmly employed, these responses can diminish the Europeans’ interest in escalating this economic war, by denying them the political victory they seek.

Red Alert: Can Anyone Explain Israeli Politics (and how it relates to global antisemitism and anti-Zionism)?
November 9, 2022
Israel Is Not an Apartheid State
June 9, 2022
Israel ups airstrikes in Syria as next step against Iran
November 10, 2021
Hezbollah warns it will hit Israel again if IDF strikes, releases attack video
August 10, 2021
IDF ramps up pressure on Lebanon following rocket fire on Israel
August 4, 2021
Red Alert: What’s the Big Meltdown Over Ice Cream?
July 27, 2021