Time for a new peace process 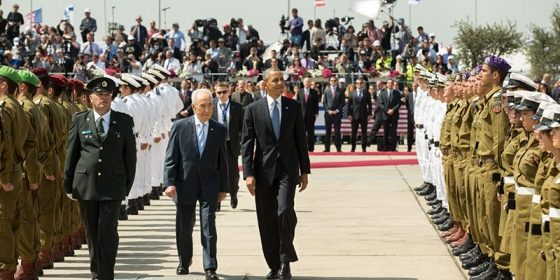 With the recent visit of U.S. President Barack Obama to Israel just two months ago and the follow up visits by Secretary of State John Kerry, in which he has revived the Arab Peace Initiative, the time has come for reexamine the very premises on which that peace process has been based.

It’s been reported that Obama has been pressuring Israeli Prime Minister Netanyahu against launching a preemptive attack on Iran’s nuclear weapons program, and that may be so, but other reports have begun to emerge that this president’s aggressive use of Kerry to renew the sluggish peace process will be even more intense.

While the brunt of this pressure will likely be exerted on Netanyahu in private, it will undoubtedly be based once again on the “land for peace” formula, under which Israel is expected to eventually vacate all or most of Judea and Samaria (the West Bank) and the eastern half of Jerusalem to create a Palestinian state. It has long been the mantra of the primary peace process promoters that Israel, a country roughly resembling in size the small state of New Jersey, would need to surrender these areas to bring Israel the elusive peace that it has always sought, even long before its reestablishment as a sovereign nation in 1948. However, after over thirty years of Middle East peace summits and conferences, with millions of dollars wasted on these efforts, resulting in over 1,600 Israeli lives lost in terrorist attacks just in the past twenty years, with thousands of others wounded, perhaps its time to try something new?

The sad fact is that the peace process has always failed and will continue to fail until we do an abrupt restart and begin to base any future peace process on biblical principles, historical justice, and common sense. Toward this end, I have proposed a new peace plan, which is called Peace for Peace, which does away with the failed land for peace formula and the hopelessly stalled negotiations and offers a unilateral path to peace between Israel and its primarily Arab Muslim neighbors, who it should be clear by now have never abandoned “the stages plan”, of using peace negotiations and the land for peace formula to chip away at Israel’s concrete assets piece by piece, thereby weakening the Jewish State’s resistance. This is an Arab strategy that we have until now foolishly accepted as legitimate, but Peace for Peace, if adopted by Israel and America’s political leadership, would change the rules of the game and stop unrealistically arousing the appetite of the Palestinian wolf. At its core are four key principles:

1. The entire land of Israel is the eternal sovereign inheritance of the Jewish people and no other sovereign nation or quasi-governmental authority can exist within the borders in Israel’s possession, which at this time consists of the territory from the Mediterranean Sea to the Jordan River.

2. Israel extends its hand in unconditional peace and cooperation, peace for peace, to all of its neighbors, including those Arabs who live within its borders in Judea and Samaria (the West Bank).

3. A path to loyal citizenship in the State of Israel will be offered for all non-citizens of Israel currently living within its borders, including Judea and Samaria. Such a path will include an extensive two-year course in Zionist, Jewish history, culminating in a required oath of loyalty to the Jewish State of Israel, with hand on the Tanach, the Bible of Israel and followed by a 2-3 year commitment of national service to Israel, as performed by all other citizens.

4. Those who refuse this path of citizenship will be offered a stipend to be resettled in one of the neighboring countries. The option of subsidized transfer will be on the table for one year. After that point, only a small number of non-citizens will be allowed to remain, based on Israel’s needs.

As has been revealed in recent demographic studies, Israel need not fear such a scenario. The demographic delusions of Israeli Knesset member Tzippi Livni, who incessantly harps on the demographic threat to Israel that would be caused by the annexation of Judea and Samaria, need not be heeded. As reported extensively by demographic researchers, such as Yoram Ettinger, Israel’s growth in Judea and Samaria is now outpacing the Arab growth. In fact, it is the only part of the world in which the demographic struggle opposite the Muslim world is being won.

The time has come for Israel’s politicians to learn from past failures and to adopt this new approach to peace – a peace based on biblical principles, historical justice, and common sense.

David Rubin is former Mayor of Shiloh, Israel and Founder and President of the Shiloh Israel Children’s Fund, established after he and his three-year-old son were wounded in a terrorist shooting attack. He is the author of three books, including his new book, Peace for Peace: Israel in the New Middle East. www.DavidRubinIsrael.com