Israel Hints at New Strikes, Warning Syria Not to Hit Back 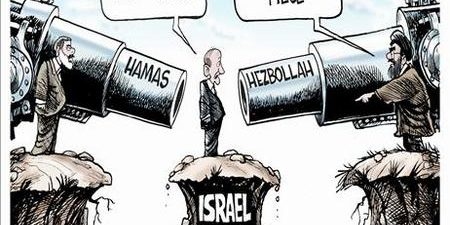 In a clear warning to Syria to stop the transfer of advanced weapons to Islamic militants in the region, a senior Israeli official signaled on Wednesday that Israel was considering additional military strikes to prevent that from happening and that the Syrian president, Bashar al-Assad, would face crippling consequences if he retaliated.

“If Syrian President Assad reacts by attacking Israel, or tries to strike Israel through his terrorist proxies,” the official said, “he will risk forfeiting his regime, for Israel will retaliate.”

The Israeli official, who had been briefed by high-level officials on Israel’s assessment of the situation in Syria, declined to be identified, citing the need to protect internal Israeli government deliberations. He contacted The New York Times on Wednesday.

The precise motives for Israel’s warning were uncertain: Israel could be seeking to restrain Syria’s behavior to avoid taking further military action, or alerting other countries to another military strike. That would increase the tension in an already fraught situation in Syria, where a civil war has been raging for more than two years.

There could be a secondary audience for the warning, analysts said, in Hezbollah and its primary supporter, Iran. Hezbollah, which is based in Lebanon, has said in recent days it could use weapons supplied by Iran to retaliate for recent Israeli strikes on Syria.

A more limited strike on May 3 at Damascus International Airport was also meant to destroy weapons being sent from Iran to Hezbollah. The Israeli government did not confirm either of the attacks, which followed another earlier this year.

The Syrian government publicly condemned Israel for the assaults, saying it “opened the door to all possibilities.” The Syrian deputy foreign minister, Faisal Mekdad, declared, “We will respond immediately and harshly to any additional attack by Israel.”

Mr. Assad and Hassan Nasrallah, the leader of Hezbollah, have each said in recent days that the Israeli-Syrian border, which has been relatively quiet despite the more than two years of civil war inside Syria, could become a “resistance front,” in response to Israeli attacks.

On Wednesday, mortar shells, fired from across the Syrian border, landed in the Israeli-occupied Golan Heights. The shells landed on Mount Hermon, a popular tourist site, and were the latest in a series of what Israel has generally considered errant fire from internal Syrian fighting.

Israel did not fire back, as it had on several previous occasions, but it closed Mount Hermon to the public for several hours during a Jewish holiday on which hiking in the Golan is popular.

In his comments, the Israeli official said that “Israel has so far refrained from intervening in Syria’s civil war and will maintain this policy as long as Assad refrains from attacking Israel directly or indirectly.”

Mark Regev, a spokesman for Prime Minister Benjamin Netanyahu of Israel, declined to discuss the meaning of the Israeli official’s statement. “We’re not going to comment on the story,” he said.

American and Israeli political analysts agree that Israel has little motive to intervene in Syria’s civil war, but that it is deeply concerned about the transfer of advanced weapons, as well as the danger that Mr. Assad’s stockpiles of chemical weapons could be used against it.

Amos Yadlin, Israel’s former military intelligence chief who now directs the Institute for National Security Studies in Tel Aviv, said that the timing of the warning could have been linked to intelligence Israel had received about something it wanted to prevent.

That, he said, could be a Syrian intention to react, albeit belatedly, to the recent airstrikes on its soil, an imminent shipment of weapons to Hezbollah, or signs of action by Syrian proxies in the Golan Heights.

Mr. Yadlin said that, aside from Mr. Assad, Russia could be another intended recipient for the Israeli official’s message. Two of the weapons systems that Israel has identified as game-changing “red line weapons” — SA-17 antiaircraft weapons and Yakhont shore-to-sea missiles — were supplied by the Russians, he added. The convoy that Israeli warplanes struck in January was carrying SA-17 antiaircraft weapons.

A Western diplomatic official who works in the region said that after the recent airstrikes, Israel had sent a similar message to Mr. Assad through back channels — probably Russia — saying it was not attacking his government but would do so if he retaliated. Perhaps, this official said, Jerusalem now wanted to broadcast the message publicly because the real audience is Iran and Hezbollah, whose leaders have been among the loudest threatening responses.

“It’s probably doubling down on the message to make sure it’s known to him and the others,” he said, also on the condition he not be named because of the delicacy of the situation. “Maybe some of the others who are calling on him to respond but also have an interest in him surviving would hear it better from this channel than other channels. Maybe it’s more directed at Iran and Hezbollah than it is at Syria.”

As for whether the timing of the statement indicated an imminent strike, this official said, “I wouldn’t think they would telegraph a punch like that so publicly.”