Both Right and Left may be wrong about Obama's speech 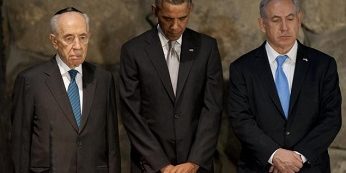 Jewish left-wingers are cheering President Obama’s Jerusalem speech in which he once again made the case for a two-state solution. Some are hoping that this will mean a renewed campaign of U.S. pressure on the Netanyahu government. With a new secretary of state in John Kerry who may well be foolish enough to believe he can succeed where so many other American peace processers have failed, perhaps they are right. But it is also possible that although Obama was eager to reiterate his ideas about the necessity of peace, the only real insights about the impact of the presidential visit may be coming from Palestinians and some of their cheerleaders.

While they will also welcome the president’s reassertion of the right of the Palestinians to a state of their own and his criticisms of Jewish settlements, it is far more probable that the part of his address today that will resonate with them is the section in which he laid out at length not only a defense of Zionism but a case for Israel’s right to self-defense and America’s ironclad guarantee of its security. Though there may be some in the Muslim and Arab worlds who will take to heart the president’s sermon on coexistence and shared goals, the chant of demonstrators that greeted him in Ramallah today, in which the crowd chanted for rocket propelled grenades, not more cooperation with the U.S., was perhaps a more accurate reading of public opinion.

Were Palestinian Authority head Mahmoud Abbas, whom the president inaccurately praised as a “partner for peace,” really interested in pursuing a two-state solution, he would take up the president’s challenge and agree, as Obama insisted during their joint press conference, to a new round of peace talks without insisting on preconditions. But the odds that the embattled Abbas, who is far more worried about Hamas than he is about Israel or the U.S., will do that are slim, making any new U.S. initiative a fool’s errand.

Those who would dismiss the president’s speeches as meaningless rhetoric shouldn’t underestimate the power of words, especially from an American president, to set the tone in the region. But those who think Obama’s appeal to Israelis to force their leaders to once again take risks for peace (something that runs contrary to the verdict of the recent Israeli election) may not only be misreading the mood of the Israeli public; they are also ignoring the Palestinians.

It should first be understood that merely stating America’s desire for a renewal of the peace process without demanding anything from the parties other than that they return to the peace table does not in any way constitute pressure on Israel. To the contrary, while Israel’s new government is under no illusion about the president wanting them to change course on settlements, they heard no concrete proposals from him that they must either refuse or accede to. In Ramallah, Obama echoed Netanyahu when he pointed out that the Palestinian demand that Israel concede every main point on borders and settlements prior to the negotiations was a formula for inaction, not peace. Israel’s position remains that it is ready to talk about everything without preconditions and that is exactly what Obama endorsed. Though it is possible Obama may follow this up with pressure on Netanyahu in the coming months and years, his speech actually made it very plain that pressure for peace would have to come from the Israel public and not from an American president who has learned his lesson about the futility of trying to impose his will on the Jewish state or on a Palestinian Authority that has consistently disappointed him.

While some on the Jewish right may only be listening to the latter part of the president’s speech in which he criticized settlements, what they need to understand is that Israel’s enemies probably stopped listening after the part where he endorsed Zionism and said those who wish to erase Israel are wasting their time. It will be those words and not his call for mutual understanding that will have the most impact.

The president may have felt that he had to precede any talk about peace with a stirring paean to Zionism and the right of Israel to defend itself against its enemies in order to make them feel safe enough to compromise. But to a Palestinian political culture that still seeks Israel’s delegitimization, that is an invitation to confrontation, not accommodation. So long as Palestinian nationalism is bound up with rejection of Zionism, it will be difficult, if not impossible, for even a stronger Palestinian leader than Abbas to make peace. And that is why he will, no doubt to President Obama’s frustration, continue to avoid talks like the plague.

Obama’s Jerusalem speech about the virtues of a two-state solution is no more likely to produce one than the one George W. Bush gave in 2002 when he became the first U.S. president to officially endorse the creation of a Palestinian state. Then, too, Bush couched his support for the concept in a context of Israeli security and Palestinian rights (though Bush also endorsed Palestinian democracy, a point that Obama wisely avoided since Abbas is now serving in the ninth year of a four-year term). But while Bush’s heartfelt support helped encourage then Prime Minister Ariel Sharon to withdraw from Gaza (a colossal blunder that has worsened the country’s security and that neither Netanyahu nor any other Israeli leader will repeat in the West Bank), it did nothing to move the Palestinians. For all of his rhetorical brilliance, Obama’s chances of succeeding where Bush failed are minimal.

In the absence of any peace proposal that will hinge on American pressure on Israel to make concessions, nothing will come of Obama’s peace advocacy. Obama’s critics on the right, both here and in Israel, may say that his Zionist rhetoric is insincere and that the only aspects of his speeches that can be believed are those that call for Israeli concessions. But while he may not, as Aaron David Miller said, be “in love with the idea of Israel,” he gave a plausible impression of someone who is an ardent supporter of that idea this week. After this trip, it is simply not possible to claim he is Israel’s enemy, even if some of his advice to it is unwise.

The irony here is that the Jewish right that will attack Obama for his speech is probably as wrong about its impact as the left that cheers it. As long as the Palestinians remain unwilling to make peace, it doesn’t matter what the Israelis do or what Obama says about the subject.