The whitewashing of hate 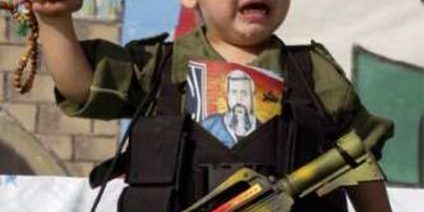 It is hard to imagine a more flawed analysis of Palestinian Authority schoolbooks than the recent report of the Council of Religious Institutions of the Holy Land, led by Sami Adwan of Bethlehem University and Daniel Bar-Tal of Tel Aviv University.

The report’s inaccuracies start with its methodology of systematically citing all quotes from Israeli and Palestinian schoolbooks under the same headings – forcing the appearance of symmetry even when none exists.

Another major flaw is giving as much weight to the fringe, ultra-Orthodox school system in Israel as it does to mainstream state schools. This artificially inflates the number of problematic examples on the Israeli side to support the report’s misleading attempt to demonstrate equivalence.

But the ultimate failing of the report is that it intentionally masks the hate and promotion of violence that are central to the PA educational system. This hatred, together with the hate and terror glorification expressed by the daily actions and messages of the PA leaders and through their controlled institutions, is rapidly condemning the next generations to continued conflict.

What did this report hide from the world? That the overall message that permeates the PA’s teachings about Israel throughout the school system is the total rejection of Israel’s most fundamental right – its right to exist.

This is how Palestinian schoolbooks teach kids to see Israel: “ …the Nakba that took place in 1948, when the Jews occupied Palestine and established their state on its land, and banished the Palestinian nation into exile and to neighboring states, after they tortured it, massacred, and stole its land, its homes and its holy sites” (Arabic Language, Analysis, Literature and Criticism, Grade 12, pp.74- 75, Revised Experimental Edition, 2012).

And like this: “Palestine’s war ended with a catastrophe that is unprecedented in history, when the Zionist gangs stole Palestine and expelled its people from their cities, their villages, destroyed more than 500 villages and cities, and established the socalled State of Israel” (Arabic Language, Analysis, Literature and Criticism, Grade 12, p. 104).

When Palestinian Media Watch published a report on Palestinian schoolbooks in 2007, the text cited above ended with the words: “and established the State of Israel.”

According to the PA Education Ministry’s website today, Palestinian children are now being taught about the “so-called State of Israel.” Such changes are not coincidental.

PA education, as a reflection of PA society in general, may be getting even more hateful.

ADWAN AND BAR-TAL list “four primary findings.” The first is, “Dehumanizing and demonizing characterizations of the other were very rare in both Israeli and Palestinian books.”

This is unequivocally false. The lack of pictures of hook-nosed Jews in the PA schoolbooks does not mean there is no demonization. Certainly, denying Israel its right to exist is the ultimate demonization. This is the foundation upon which the PA builds its entire political ideology and political education.

Another critical component of the PA’s demonization is a 12th-grade book’s definition of Israel as a racist, foreign, colonial implant: “The phenomenon of Colonial Imperialism is summarized by the existence of foreigners residing among the original inhabitants of a country, they possess feelings of purity and superiority, and act towards the original inhabitants with various forms of racial discrimination, and deny their national existence.

The PA’s defining Israel as “racist,” “foreign” and a “colonizer” is not merely crude defamation; it is the PA’s justification for all killings of Israelis by terror since 1948.

In another 12th-grade book, the children learn that “international law” grants people living under precisely these three types of regimes the inalienable right to fight the regimes: “The General Assembly announced a number of basic principles related to the judicial status of fighters against colonial rule, foreign rule and racist regimes: The struggle of the nations under colonial rule, foreign rule and racist regimes, for their right to self-determination and independence, is a legitimate struggle, fully complying with the principles of international law” (Contemporary Problems, Grade 12, 2006 p. 105, and Second Experimental Edition, 2009, p. 101)

“Any attempt to suppress the struggle against colonial and foreign rule and racist regimes is considered as contrary to the UN convention and the declaration of principles of international law…. The armed struggles that are an expression of the struggle of the nations under colonial rule, foreign rule and racist regimes are considered as international armed conflict” (Contemporary Problems, Grade 12, 2006, p. 105, and Second Experimental Edition, 2009, p. 101) THE PA’s promotion of nationalistic “armed struggle” as a right is exacerbated by its mandating violence against Israel as mandatory in the name of Islam – “until Resurrection.”

Islamic Education for Grade 12 teaches that the conflict with Israel is a “Ribat for Allah,” which it defines as “one of the actions related to Jihad for Allah and it means being found in areas where there is a struggle between Muslims and their enemies” (Islamic Education, Grade 12, 2006 and 2012, p. 86).

Alarmingly, the book teaches Palestinian children that their war over Palestine is not going to end with a secular peace treaty, but is an eternal war for Islam “until Resurrection Day” (Ibid, p. 86).

IT IS significant that neither this legitimization of “armed struggle” “against colonial and foreign rule and racist regimes” – the PA’s definition of Israel – nor the mandating of eternal religious violence against Israel were even mentioned in the Bar-Tal/Adwan report.

Had the authors included this area of research, they would have been forced to concede that there is no corresponding defense of terror and promotion of violence in Israeli textbooks.

The failure to cite these significant and dangerous messages in the PA’s schoolbooks – messages which have been promoted actively by PA leaders since 2000 to justify their terror against Israel and killing of Israelis – is indicative of the report’s flawed methodology and fundamental errors.

These and the many other omissions and misrepresentations necessitate immediate and public rejection of the findings by the US State Department, whose funding in 2009 launched the project.

Should the US adopt these findings, the chance for a peaceful future for children on both sides of the conflict will decrease dramatically.

At a press conference in the US Senate building to release PMW’s 2007 report on PA schoolbooks, then-Senator Hillary Clinton introduced the report: “These textbooks do not give Palestinian children an education; they give them an indoctrination.

Tragically, Clinton’s words still hold true today. PA schoolbooks, along with PA culture and media, are the recipe for guaranteeing that the conflict, terror and war will continue into the next generation.

Only if the international community preconditions its political contacts and support for the PA on the PA’s compliance with demands to eliminate its culture of hate and violence will peace become possible.

While the Palestinian Authority is ultimately responsible for the hatred and terror it promotes, its defenders, especially Israelis like Bar-Tal, are ultimately enablers of this hatred. Such misleading reports could ease the international pressure that has been put on the Palestinians to replace their hate education with peace education.

Public rejection of this Bar- Tal/Adwan report by the US is not merely the right thing to do. People’s lives are depending on it.

The author is the founder and director of Palestinian Media Watch.