Obama can’t get even with Netanyahu 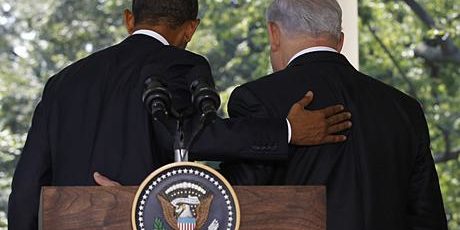 The Israeli reaction to the much talked about Jeffrey Goldberg column wasn’t long in coming. Leading members of the Likud Party claimed that Goldberg’s reporting of critical comments about Israeli Prime Minister Netanyahu by President Obama constituted interference in the country’s elections that will be held next week. If true, some might see it as tit-for-tat since the Israeli’s decision to highlight a snub from the president and differences with him over dealing with the Iranian nuclear threat last September was widely seen as an attempt to help Mitt Romney’s doomed presidential campaign. Netanyahu would certainly have preferred to see Obama lose. But rather than intervening, he was probably thinking that putting pressure on Obama during the lead-up to the November election would force the president to take a tougher stand on Iran. Instead, Obama, who despises the prime minister, rebuffed Netanyahu leaving him looking like an incompetent meddler.

However, the accusations that the White House used Goldberg to get even with Netanyahu are probably untrue. As much as the president and his foreign policy team detest Netanyahu, they are probably aware that an American attempt to influence the vote in Israel would backfire. Obama is deeply unpopular in Israel and every time he has picked a fight with Netanyahu it has only strengthened the prime minister’s standing at home.

Netanyahu is certain to lead the next government and though the president would probably like to do something to stop that from happening, he knows he can’t. Goldberg was, as he told the Jerusalem Post, only writing what everyone already knew about the president’s feelings. Obama believes he knows what is in Israel’s “best interests” better than the man elected to lead that country. But as much as the ongoing feud between these two personalities rivets our attention, the disconnect isn’t so much between Obama and Netanyahu as it is between the American foreign policy establishment—and many liberal American Jews—and the consensus of the Israeli people. It is that gap between what most Israelis see as obvious about the moribund peace process and the conventional wisdom that is routinely churned out by the mainstream media in the United States that is the real issue.

Likud might get some traction by highlighting Obama’s disapproval. Israelis are well aware that in the recent past American presidents have tried to intervene in their elections with mixed results. George H.W. Bush helped sink Yitzhak Shamir in 1992. Bill Clinton’s open rooting for Shimon Peres didn’t stop Netanyahu from winning his first term as prime minister in 1996 but American disapproval was a handicap when he was beaten in 1999. But the main point here is that while Israelis don’t relish the idea of being on the outs in Washington, they are also not interested in listening to advice from Obama.

The assumption underlying Goldberg’s article was that Netanyahu is isolating his country via policies that are not aimed at encouraging “Palestinian moderates.” The decision to allow building in Jewish neighborhoods in Jerusalem and its suburbs that would be kept by Israel even if there were a two-state solution are seen by Obama and the Europeans as intolerable provocations that should be punished. By not making concessions on security and territory that might tempt the Palestinian Authority back to the negotiating table, Netanyahu is seen as uninterested in peace or as even making an accord impossible. But most Israelis see these issues very differently.

The parties that make up Netanyahu’s current coalition are cruising to what may be a landslide victory next week because, unlike Goldberg’s White House sources and most Western talking heads, the majority of Israeli voters understand that the Palestinians—both Hamas and the supposedly more moderate Fatah-led PA—are not going to make peace no matter what Netanyahu does. They also view the notion of further withdrawals as an invitation to create another terror state like the one in Gaza in the much larger West Bank alongside Israel’s population centers.

Where Israel was once closely divided between right and left on the issue of peace initiatives, the center has shifted in the country’s politics. What Obama and most Americans don’t get about Israel is that Netanyahu is not so much the leader of the right as he is now firmly ensconced in the middle of the political spectrum. That’s why so many on the right are flocking to the banner of Naftali Bennett, the leader of the pro-settlement party that polls show will make huge gains in the upcoming election. The main difference between Netanyahu and Bennett is that the former still pays lip service to a two-state solution as the theoretical best option for Israel even though the Palestinians will never accept it, while the latter’s campaign ads say that it is no more likely to happen than another season of “The Sopranos.”

Like so much commentary about the Middle East, Obama’s evaluation of the situation via Goldberg shows that he is still focusing only on what Israel does and ignoring the reality of a Palestinian political culture that is incapable of accepting peace. If real peace were an option, no Israeli political leader would be able to resist accepting it. Pretending that such a choice is available to Israel is mere posturing, not a policy. Any American who doesn’t understand that fact has no business spouting off about what is in Israel’s best interests.