No blank check for Israel 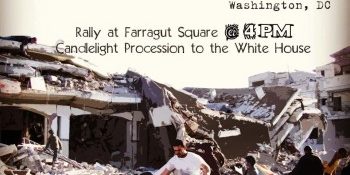 The Jewish Voice for Peace, American-Arab Anti-Discrimination Committee and Washington Interfaith Alliance for Middle East Peace has put together a “No Blank Check for Israel” march in the nation’s capital on January 19. The promotional video boasts of the event’s Christian support, with the description emphasizing that 15 church leaders wrote a letter in October supporting congressional investigations into U.S. aid to Israel. The adversaries of Israel recognize that the stance of the church will decide the future of the U.S.-Israeli relationship.

The Facebook page for the group has a picture of a man standing in front of a destroyed building with the caption, “Our Tax Dollars in Action. No Blank Check for Israel.” The video compares the cause to the civil rights struggle and the page says “We must condition U.S. aid to Israel on compliance with U.S. and international law!” Jewish Voice for Peace, the group that set up the Facebook page and is one of the event’s organizers, wants U.S. aid suspended until the “Occupation of the West Bank, Gaza and East Jerusalem” ends.

The Presbyterian Church USA Office of Public Witness signed a letter in July 2012 attacking Rep. Bachmann and the other four members of Congress that requested investigations into Muslim Brotherhood influence in the U.S. government.  The letter defended Huma Abedin, the Islamic Society of North America, the Muslim Public Affairs Council and Muslim Advocates.

The Presbyterian Church nearly approved divestment from Israel last summer, with the measure falling only two votes short with 331 for it and 333 against it. The divestment supporters were praised by the director of the Islamic Society of North America’s Office of Interfaith Relations, Sayyid Syeed. A new documentary includes footage of Syeed saying “our job is to change the constitution of America” in 2006.

The United Methodist Church, General Board of Church and Society also signed the letter. The general secretary of the body, Jim Winkler, also signed a letter in March 2012 blasting the NYPD for using the film, The Third Jihad, calling it “bigoted propaganda.” The letter was written by Shoulder-to-Shoulder, which Winkler is a Steering Committee member of. The president of the Islamic Society of North America, Imam Mohamed Magid, is an Executive Committee member. United Methodist Women also put up ads in response to the American Freedom Defense Initiative’s controversial ads that said, “In any war between the civilized man and the savage, support the civilized man. Support Israel. Defeat Jihad.”

Now, these anti-Israel Christians are teaming up with the American Arab Anti-Discrimination Committee (ADC), the Washington Interfaith Alliance for Middle East Peace and Jewish Voice for Peace to pressure President Obama.

ADC worked with the Council on American-Islamic Relations to register voters during the last election. ADC often depicts the prosecution of Islamist individuals as acts of political persecution, sometimes deceiving its audience by leaving out key facts and names. It honored columnist Helen Thomas with an award after she told Jews to “get the hell out of Palestine” and saying “Congress, the White House and Hollywood, Wall Street are owned by the Zionists.”

ADC was founded in 1980 by James Abourezk, the first Arab-American Senator. He touts conspiracy theories that the U.S. government has been “bought off by the Israel lobby.” He has called Hamas and Hezbollah “resistance fighters,” a sentiment he reiterated in an interview with Hezbollah’s Al-Manar television station in August 2007. In the same interview, he stated that Zionists were behind the 9/11 attacks and that he “marveled” at the “courage and bravery” of Hezbollah during its war with Israel in 2006.

In 1994, then-President of ADC, Hamzi Moghrabi, said he didn’t consider Hamas to be a terrorist group because “I know many people in Hamas. They are very respectable…I don’t believe Hamas, as an organization, is a violent organization.” His successor, Hala Maksoud, said he was “shocked” that the U.S. considers Hezbollah a terrorist group. In 2000, Hussein Ibish, then ADC spokesman, described Hezbollah as a “disciplined and responsible liberation force.”

The Washington Interfaith Alliance for Middle East Peace has Mark Braverman on its advisory council, according to his biography. The forward to Braverman’s 2010 book, written by Walter Brueggemann, says Israeli exceptionalism “gives warrant to brutalizing policies carried out by the Israeli government” and that exceptionalism is the cause of “religious-ideological support for American expansionist imperialism.”

Jewish Voice for Peace’s advisory board includes Noam Chomsky. The group mourned the deaths of Yasser Arafat and Hamas spiritual leader Sheikh Ahmed Yassin. It says “the Occupation is the root cause of the violence, and that the Occupation itself, with its checkpoints, harassment, and dispossession of Palestinians is itself an act of violence. We believe that all attacks on civilians, whether by the Israeli army or Palestinian militias, are war crimes.”

The organization makes Israel sound like a heartless, genocidal entity whose sins far outweigh anything ever done by Hamas. It even claims that Israel uses its “U.S.-financed arsenal against unarmed Palestinian civilians, including children.”

“Our tax dollars have been used to destroy homes; uproot trees and crops; seize land from its lawful owners; close all access to food, medicine, and the outside world for small towns in the West Bank and Gaza; staff checkpoints that cut off ambulances and other civilian traffic; and carry out assassinations that kill children in addition to summarily executing political leaders,” Jewish Voice for Peace says.

Jewish Voice for Peace also has a campaign called “Standing Against Islamophobia.” It says “We are witnessing an insidious new wave of demonization of Arabs and Muslims in this country” because of “right-wing Christian and Jewish groups dedicated to denying the fundamental rights of Palestinians.” The page showcases how the organization condemned the “NYPD’s use of anti-Muslim propaganda,” stood against the pro-Israel/anti-jihad subway advertisements and defended the “Irvine 11.”

January 19 was picked by these groups because of its proximity to Inauguration Day. They want to be noticed by President Obama and his administration and officials whose hostility to Israel is muted by fear of political backlash. It’s a day to show the strength of the anti-Israel bloc. And it’s a day to chip away at Christian and Jewish support for Israel, little by little.

This article was sponsored by the Institute on Religion and Democracy.