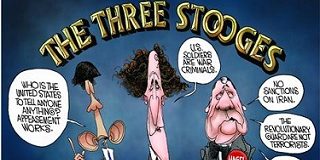 Chuck Hagel hates Jews. Or should I say, he hates Jews who think that Jews have rights and that their rights should be defended, in Israel by the government and the IDF, in America by Israel’s supporters.

As I mentioned before, it is not at all surprising that Obama appointed Hagel, and I see little  chance that the Senate will reject his appointment. Israel and its American friends however can take heart that Israel will not be Hagel’s chief concern.

Hagel — and Obama — have bigger fish to fry than Israel. They are looking to take on the US military. They will slash military budgets, they will slash pensions and medical benefits for veterans in order to save a couple dollars and demoralize the military. They will unilaterally disarm the US to the point where America’s antiquated nuclear arsenal will become a complete joke. And I don’t see the military capable of stopping it. Anyone remember the F-22?

I find the whole Israel angle on Hagel irritating because of this. Yes, Hagel will be bad to Israel. But we can minimize the damage by diversifying our own arsenal and weaning ourselves off of US military handouts that only serve as work subsidies for US military contractors at the expense of Israeli ones. Moreover, for years that military aid has been a corrupting force on Israel’s general staff. I’ve been advocating ending US military aid to Israel for more than a decade, but better late than wait until we find ourselves at war and out of spare parts because Hagel and Obama won’t sign the requisition orders to Boeing and Lockheed.

Unlike Israel, the US military cannot minimize the damage that Hagel and Obama will cause. America’s capabilities will suffer at the hands of the duly reelected Commander in Chief and his duly appointed Defense Secretary. The only chance to dodge that bullet was on Election Day and the American people blew it.

By making this a story about Hagel the anti-Semite, nice senators like Lindsey Graham and John McCain are obfuscating the main problem. The main reason Hagel shouldn’t be appointed is not because he hates Israel. It is because he hates a strong America.

But then, that is why Obama appointed him. The American people in their wisdom, reelected Obama despite the fact that he wants to cut America down to size, strangle the economy in regulations and unaffordable welfare handouts and then gut its military. By making Hagel’s appointment about Israel all his opponents are doing is giving Hagel and his supporters new excuses for sticking it to Israel.

It was Obama and his supporters that started the myth that Netanyahu was interfering in the elections, even though he did no such thing. All Netanyahu did was welcome Romney to Israel during the campaign, just as Olmert welcomed then senator Obama to Israel before the 2008 elections.

Obama, Hagel and their army of media outlets and operatives are setting Israel up to take the blame for everything they do and in the process seeking to demonize Israel’s prime minister before the American people. The campaign against Hagel the anti-Semite just plays into that while hiding the real problem which is that he is anti-American.

NOTABLY, AT the same time that the US electorate decided they’d had it with being the indispensable nation and so reelected a man who said the US is as exceptional as Greece, Israelis have decided we’ve had enough with trying to pretend we’re nothing special.

Next week we’re going to vote and it is already clear that Israel is in the midst of the Second Zionist Revolution. The first Zionist revolution was a socialist revolution. The second Zionist revolution is Jewish. Israel is coming into its own. Judaism is flourishing, changing, living and breathing here like it never has anywhere since the destruction of the Second Commonwealth. The secular Left has been eclipsed by the Jewish Right. I don’t call it the religious Right because that is too limiting. What’s happening isn’t just about religion, it’s about everything and that is why non-observant hipsters in Tel Aviv are voting for the Jewish Home party. Non-observant and observant Jews are joining forces and the anti-religious are being left behind.

As my content editor at Latma Avishai Ivri explained to me a couple weeks ago, all the polling data we’re seeing is largely worthless because it is based on calls to landlines and most young Israelis don’t have landlines. Two thirds of the Jewish Home party’s voters are under 40 and the party is polling at 14-18 seats in polls that under-represent their supporters. I don’t pretend to know how the election results are going to look but it is clear that a massive change has occurred in the last few years and it will only become more pronounced in the coming years. Next week’s election will be the first formal expression of this change.

Some fear that Netanyahu will take his electoral victory, throw it in the garbage and replay Sharon’s perfidy, by spitting on his voters and his party and forming a narrow coalition with the far Left in order to appease the anti-Semites in Washington. But I don’t see that happening. First, Netanyahu isn’t as shameless as Sharon and he doesn’t seem to have the dictatorial impulses Sharon suffered from.

Second, I don’t think he has the people in Likud that would let him go that route. Sharon had Olmert and Livni who were happy to toss their values out the window for job promotions. Netanyahu is the head of the most right wing Likud list ever. The lefties he pushed into the cabinet despite his party members’ objections last time around – Dan Meridor, Benny Begin and Michael Eitan — were obliterated in the primaries. Netanyahu can’t bring them in this time, even if he wants to. So that means he doesn’t really have the ability to abandon his base, even if he wanted to. And again, I don’t think he’d want to.

What all of this means is that beginning next month, we are in all likelihood going to see a post-American US government squaring off against the first genuinely Jewish Israeli government ever. I don’t know what will happen when they meet. But I know it will be great material for my column.