If I forget thee, O Jerusalem 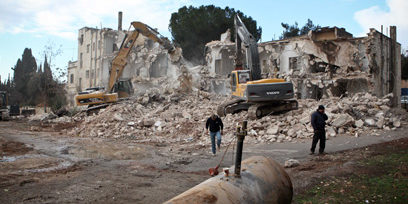 It’s a shame. A shame that building up Jerusalem — the city that has protected Jews throughout the generations more than we have protected it — has become a form of punishment. A stick with which to hit others over the head.

After all, building in Jerusalem is a privilege and a duty, and also a true necessity. If there is a demand for homes in Jerusalem, they should be built. All year round. But not as a punishment. If there is no need for housing, then there should be no construction. Not yesterday, not today and not tomorrow.

Despite all that, the government should be commended. The current dispute with the U.S. and Europe is a good one, even if it has erupted too late. If the U.S. had not attacked Prime Minister Benjamin Netanyahu’s policy on Jerusalem, then there would be room for concern.

After years in which the Israeli leadership kept raising Palestinian hopes over our capital city, it is about time that Netanyahu and his ministers begin lowering these hopes back down and repairing the serious damage. Netanyahu’s government has been going about this slowly and hesitantly, but better late than never.

Israel’s previous governments have left scorched earth behind. The administrations of Ehud Barak and Ehud Olmert were willing to divide the city, betraying all their vows not to do so.

Netanyahu took his time in rectifying their mistakes. It was not easy to extricate the lamb from the wolf’s jaw. Still, his government built in the city, even if it was too little and too slow, renewing the vows to Jerusalem.

Netanyahu faced many obstacles: Green activists blocked construction in western Jerusalem, while the U.S. blocked construction in the east. The result has been catastrophic: Only 1,700 housing units are being built annually in Jerusalem, while the demand for housing is at 4,500 per year. The city’s Jewish residents have been voting with their feet. They had no place to live, so they left.

Meanwhile, the construction of the separation fence in northern Jerusalem prompted an influx of tens of thousands of Palestinians into Jerusalem. Contrary to European propaganda, Jerusalem’s Arabs want to continue living under Israeli rule. Anyone who talks to them directly, and not to their leaders, will hear them say as much. Add the high birthrate among the city’s Arabs, and you get a grave demographic crisis for the city’s Jewish population.

The benchmarks, in any case, have remained skewed. But it is not too late to remedy this, even if it means a confrontation with Europe and the U.S. If this government still has any red lines, Jerusalem is one.

Actual construction in the city — not the declaration of a plan to build — will prove to the world that we have regained our sanity, that Jerusalem will not be divided and that we will not revert to the Green Line. This construction will also prove that the Arabs, who only came here in the last few centuries, have “all the rights in Israel, but no right to Israel,” as historian and former Education Minister Ben-Zion Dinur so aptly put it. The same is true, of course, for Jerusalem, the manifestation of Jewish recollection and justice.

Those who wish to save Jerusalem need to renew life in the Old City as well. That is what the most enlightened of our governments did, under the leadership of Levi Eshkol and Golda Meir after the Six-Day War. Anyone who wishes to save our sovereignty over Jerusalem has to hurry up and fill the leadership void in many parts of east Jerusalem. As things stand today, these voids are being filled by the Palestinian Authority and Hamas. In Jerusalem, our capital, there are areas that the Israel Police and other Israeli authorities dare not enter. That is not how a sovereign power behaves in its own capital city.

“This nation planted its feet on this bit of earth with all its might and will not budge from it,” said Haim Nahman Bialik in 1925, at the inauguration of the Hebrew University of Jerusalem on Mount Scopus. “All the 49 gates of impurity of the cursed exile failed to change its mind.”

That is how Netanyahu should be speaking now, especially when addressing his own people, but also when addressing the world. The proper language, specifically when discussing Jerusalem, is the language of rights. Security is important, but rights are more important. The parallel discourse is the language of action. A rug of gold can be woven from all the vows made to Jerusalem, but the gap between words and actions is enormous.

If we really want to win this battle, we have to build in Jerusalem, in the east and in the west, tens of thousands of housing units and workplaces. We received a great gift in 1967 when we returned to Jerusalem and to the holiest of sites, and reunited the city. Let us not squander this gift.