Legal implication of the UN Resolution on Palestine 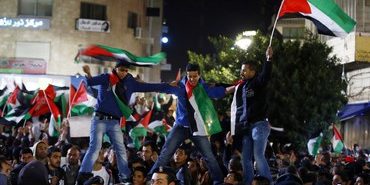 The actions of the General Assembly have removed the incentive necessary for Palestinians to negotiate with Israel.–

The General Assembly vote declaring that Palestine, within the pre-1967 borders, is a “state”, at least for some purposes, would have nasty legal implications, if it were ever to be taken seriously by the international community.  It would mean that Israel, which captured some Jordanian territory after Jordan attacked West Jerusalem in 1967, is illegally occupying the Western Wall (Judaism’s holiest site), the Jewish Quarter of old Jerusalem (where Jews have lived for thousands of years), the access road to the Hebrew University (which was established well before Israel even became a state) and other areas necessary to the security of its citizens.  It would also mean that Security Council Resolution 242, whose purpose it was to allow Israel to hold onto some of the territories captured during its defensive 1967 war, would be overruled by a General Assembly vote—something the United Nations Charter explicitly forbids.  It would be the first time in history that a nation was required to return all land lawfully captured in a defensive war.

If all the territory captured by Israel in its defensive war is being illegally occupied then it might be open to the newly recognized “Palestinian State” to try to bring a case before the International Criminal Court against Israeli political and military leaders who are involved in the occupation. This would mean that virtually every Israeli leader could be placed on trial. What this would entail realistically is that they could not travel to countries which might extradite them for trial in the Hague.

These absurd conclusions follow from the theater of the absurd that occurred when the General Assembly, for the thousandth time, issued an irrelevantly one sided declaration on Palestine.  As Abba Eban once put it:  “If Algeria introduced a General Assembly Resolution that the world was flat and that Israel had flattened it, it would pass 100 to 10 with 50 abstentions.” That’s pretty much what happened the other day. I wonder whether the European countries that voted for the Resolution knew what a tangled web they were weaving.

Nor was this Resolution a recognition of the two-state solution, since a considerable number of states who voted for it have refused to recognize Israel’s right to exist.  What they were looking for was a one-state resolution—that one state being yet another Islamic country that voted for Hamas in the last election and that is likely to be governed by Sharia Law that will not allow Jews or Christians equal rights.

Neither will the General Assembly’s actions move the Palestinians closer to accepting the ongoing Israeli offer to begin negotiations toward a two state solution with no prior conditions. The Palestinians now have little incentive to negotiate a state, which would require considerable compromise and sacrifice on all sides. They now think they can get their state recognized without the need to give up the right of return or to make the kinds of territorial compromises necessary for Israel’s security. The United Nations action will only discourage the Palestinians from entering into serious negotiations with Israel.

The United Nations’ action will also incentivize Hamas to continue firing rockets into Israel on a periodic basis in order to provoke Israeli retaliation. Many in Hamas believe that the recent fighting in Gaza actually helped the Palestinians get more votes in the General Assembly. They are certainly taking some of the credit for these votes.

All in all, the United Nations vote will make it harder to achieve a peaceful two state solution, acceptable to both sides. But that has been the history of General Assembly actions with regard to Israel, beginning with the lopsided vote in 1975 that challenged Israel’s very existence by declaring Zionism—the national liberation movement of the Jewish people—to be a form of racism.  Although the General Assembly was ultimately pressured into rescinding that blood libel, its bigoted spirit still hovers over numerous United Nations agencies which continue to regard Israel as a pariah. It could be felt in the General Assembly hall when so many countries that refused to recognize Israel voted to recognize Palestine.

But what else is new at the United Nations?