Israel officials down but not out over Obama win 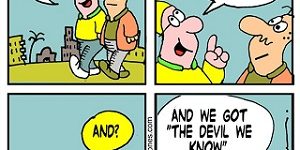 Israeli government officials belonging to the ruling right-wing parties had a difficult time hiding their disappointment over Barack Obama’s victory in the US presidential election, but remained determined to keep Israel-US ties tight and secure.

Deputy Knesset Speaker Danny Danon, a rising start in Prime Minister Benjamin Netanyahu’s Likud Party, offered his congratulations to Obama, but said it was important to remember the incumbent American president had not been good to Israel during his first term.

“It is my hope, and that of many Israelis, that the president resets his course relating to Israel and our region for the next four years,” Danon said. “Rather than dictating ill-advised policies that endanger the well-being of America’s only true ally in the Middle East, now is the time for President Obama to return to the wise and time-honored policy of ‘zero daylight’ between our respective nations.”

Danon said it was long past time for Obama to visit Israel, something he conspicuously avoided during his first term.

Knesset Member Arieh Eldad of the National Union Party insisted Obama was “the most hostile president to Israel in recent decades” and cautioned that his reelection would not bode well for the Jewish state.

Netanyahu himself only thinly veiled his preference for challenger Mitt Romney to win the election in the months leading up to the poll.

But Netanyahu’s former bureau chief, Uri Elitzur, wrote that the lack of chemistry between Netanyahu and Obama may not be a bad thing for Israel.

“It is not healthy for Israel to be in a situation in which the president of the United States is hugging our prime minister and pouring love on him,” explained Elitzur. “When a big and small figure are good friends, the small one fulfills every request of the big one because it is unpleasant to refuse him.”

On the other hand, Elitzur pointed out, “when a big figure and small figure carry out negotiations in an atmosphere of distance and reservations, it is easier for the small figure to take a stand, defer proposals, make conditions and sometimes refuse.”

Looking at the recent history of US-Israel relations as regards the peace process, for instance, Elitzur’s analysis makes sense.

It was Bill Clinton, who had great chemistry with both Israeli leaders and the public, who hoisted the doomed “Oslo Accords” on the Jewish state, and it was George W. Bush, the Israel-supporting Evangelical Christian, who presided over Israel’s ill-fated surrender of the Gaza Strip.