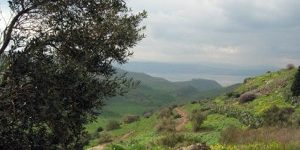 Gantz and his entourage were able to see battles between Syrian troops and rebel forces from the other side of the border.

On Saturday, the IDF lodged a complaint with UN forces enforcing the ceasefire in the Golan Heights.

During the tour, Gantz spoke to commanders of the Golan Heights division and observed Syrian fighting taking place mere kilometers from the army posts.

“This is a Syrian matter which may turn into an Israeli matter,” he told the troops. The IDF chief ordered the combatants to be ready to defend the Golan and prevent any spillover.

IDF Spokesman Yoav Mordechai said that sounds of tank fire could be heard from across the border. “The division commanders are ready for the moment when fire is directed at us,” he said. “I can see with my own eyes Syrian soldiers and rebels.”

The Syrian regime claimed on Sunday that Saturday’s border incident was part of the army’s efforts to establish control in the area following the rebels’ attempts to seize villages in the demilitarized area, the al-Watan newspaper reported.

“The army launched a wide-scale operation to purge the villages of gunmen.”

Recent months have seen expanded fighting between rebels and the Syrian army in the northern Golan Heights. Some six weeks ago, several mortar shells hit agricultural land in northern Israel.

The IDF fears that the Syrian civil war will create a Sinai-like border area that will serve as a terrorist hotbed for the Global Jihad and al-Qaeda.