Candidly Speaking: An election of great import for Israel 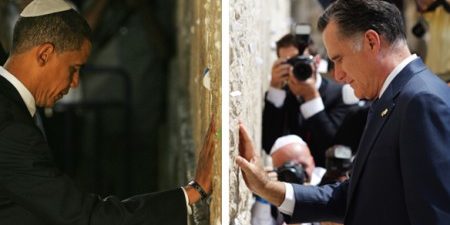 Next week’s US presidential election will have major implications for the entire western world, but in particular for Israel. It is also noteworthy that Israel and the Jews have never featured so prominently in a presidential campaign. In last week’s debate on foreign policy between President Barack Obama and Governor Mitt Romney, both candidates competed to demonstrate their pro-Israel credentials and the Jewish state was mentioned no less than 34 times.

Until six weeks ago there was an emerging consensus shared by supporters and opponents alike, that Romney had failed to make an impact and that Obama would be reelected. Yet since the first dramatic debate, the upsurge in support for Romney has been extraordinary, and if the polls reflect reality, the outcome could be a real cliff-hanger.

Of course, opinion polls can be misleading. The complexity of the Electoral College voting system does not necessarily grant victory to the candidate receiving the majority of votes. The even more critical factor is whether those who actually vote will proportionately adhere to the same trends as those initially polled.

Not surprisingly, many Israelis will be hoping for a Romney win. Despite Obama’s ongoing commitment to providing Israel with military aid and his more recent positive policies towards Israel, it is no secret that he personally loathes Prime Minister Binyamin Netanyahu.

Most Israelis are fearful that if reelected, no longer needing a charm offensive to garner Jewish support, Obama is likely to repeat the pattern of his first term when he unashamedly reneged on many of his previous undertakings towards Israel.

They are concerned that he will revert to his earlier policy of “adopting daylight between Israel and the US” and will renew pressure on the Jewish state to make further unilateral concessions towards the Palestinians. There is fear that he will again insist that the indefensible 1949 armistice lines be considered as the opening benchmark for negotiating borders and will also press for the division of Jerusalem.

Romney, in contrast, enjoys a cordial personal relationship with Netanyahu. More importantly he also seems to display a far more positive attitude towards the Jewish state. One of his major criticisms of the administration’s foreign policy has been Obama’s alleged abandonment and continuous public chastisement and humiliation of Israel.

Whereas Obama blames Israeli settlement policies – including home construction in east Jerusalem’s Jewish suburbs – for the impasse with the Palestinians, Romney says plainly that peace will be unattainable until the Palestinians genuinely abandon their objective of destroying the Jewish state.

As to Iran, notwithstanding undertakings to do all that is necessary to prevent them from becoming a nuclear power, should sanctions fail to bring about tangible results there are grave doubts as to whether Obama would be willing to take the tough measures required. However, should Romney be elected, while presumably providing notice of tougher intentions, during his first months in office he too would be unlikely to immediately initiate drastic military action.

There is a vast chasm between the approaches of both candidates in relation to the Arab world, which is increasingly falling under more extreme Islamic and jihadist influences and where use of the terms Islamic extremism or Islamic terrorism are even banned.

Despite having eliminated Osama bin Laden, the Obama administration has, as a matter of course, appeased Islamists by initially resisting sanctions and failing to support the Iranian dissidents seeking regime change.

Shortly after taking office, Obama infuriated the Mubarak government by legitimizing the Muslim Brotherhood when he insisted that their representatives occupy the front row at his inaugural speech in Cairo. Furthermore, at the outset of protests in Egypt, he abandoned the authoritarian President Hosni Mubarak, regarded as one of the strongest US allies in the Arab world.

Since then, his administration has consistently understated the fanatical extremism of the Muslim Brotherhood and ignored the recent genocidal exhortations against Israel by their newly elected Egyptian leader. The groveling response to the terrorist upsurges in Libya and Egypt is another indicator of the administration’s policy of Islamic appeasement.

Obama also repeatedly publicly praised the dictatorial Islamist Turkish leader, Recep Erdogan, who made himself popular in the Arab world by his anti-Israeli tirades and efforts to impose boycotts and isolate the Jewish state.

Yet, after four years in office, despite President Obama’s desperate efforts to appease and “engage” the Islamists, the US today is more reviled in the Arab world than ever before.

The perception amongst most Israelis is that a Romney administration would be more realistic and tougher towards the Islamists.

However, in contrast, the majority of American Jews, clearly loth to forfeit their liberal DNA, still support Obama and will continue voting Democrat. Besides, like most Americans, economic policies are the principal factors determining their vote.

This also partially reflects the depressing reality that a large proportion of American Jews, especially the more assimilated, no longer consider Israel a major priority when casting their votes. Indeed, for many of the less committed Jews, issues like gay marriage and abortion on demand seem to outweigh the wellbeing of the Jewish state.

On the other hand, there will undoubtedly be a substantial number of Jewish defections from the Obama camp, with the more committed and Orthodox Jewish segments voting heavily against the current president.

Prime Minister Netanyahu has assiduously avoided engaging in the presidential campaign. That has not prevented his political opponents from accusing him of making Israel a “wedge” issue. Yet it would be inconceivable that due to the US presidential election, an Israeli prime minister should remain silent on the need to for the world to stand up and take tough action against a potentially nuclear power publicly exhorting the world to support its objective of wiping his country – “a cancer” – off the face of the planet. As Netanyahu said to CNN, “I am being guided by the Iranian nuclear calendar not the American political calendar.”

But Netanyahu would be less than human if privately he did not yearn for a victory for Romney, who has been both a friend and ally.

If, however, Obama is reelected, Netanyahu will be obliged to try to overcome the personal animosity and work with him, without compromising Israel’s security or long-term strategic interests. This will not be easy but as long as grass roots support for Israel remains strong and Congress does not abandon us, it is possible. From his side Obama may have learnt that his bullying tactics only strengthened public support for Netanyahu in Israel.

And if Romney wins, Israelis should not be euphoric. Although Romney will undoubtedly have a better chemistry with Israel than his predecessor, we still face tough challenges. And we should bear in mind that whereas Romney is undoubtedly a friend, the track records of Republican presidents toward Israel has also often been problematic.

Irrespective who becomes the next president of the USA, American Jewish leaders must seek to reverse the growing threat from the far Left anti-Israeli activists in the Democratic party and reinvigorate the bipartisan spirit which has been so vital to maintain the strong US-Israel relationship.

The writer’s website can be viewed at www.wordfromjerusalem.com. He may be contacted at ileibler@leibler.com